Texas, the bullet train and its long journey

The Texas high-speed train project is ready to go

Seen from the air, the 380 kilometers (240 miles) between Houston from Dallas seems connected by an unbroken line of ants. Instead, these ants are actually cars of the 50,000 Texans who travel between the two largest cities in this massive state at least once a week. This habit has created congestion on one of the most important roads in the United States for years.

The future, however, is another story. A proposed high-speed bullet train will make the journey between Houston and Dallas/Fort Worth in less than 90 minutes running every 30 minutes during rush hour. The Texas Central Railway company – in charge of carrying out the project– and the train have taken on a difficult task: rewriting the mobility of Texas in a sustainable way.

The Texas train on the tracks of the future

The U.S. and the challenge of its first high-speed train

The state of Texas is usually seen as a sort of “concentrated version” of the United States of America, but today Texas is at the center of a profound social and economic transformation that is making it one of the most dynamic states in America.

This vision of the future was already visible in 2017 when the Pulitzer Prize winning Texan journalist, Lawrence Wright, wrote an article in The New Yorker entitled “The Future of America is Texas.”

That future seems now to have arrived with the planned Houston-Dallas/Fort Worth line, destined to become the first truly high-speed train in the United States. A complex infrastructure, requiring an investment of about $20 billion. Webuild Group has won the design-build contract.

The Texas High-Speed Rail project aims to shorten travel times between two strategic cities for the state’s trade and economy. Investors opted for a sustainable solution – along with a high economic impact, the train has a low environmental footprint.

According to calculations by independent analysts, in the first 25 years of activity the train will have an impact on the Texan economy of $36 billion. In addition, the six years of work needed to complete the project will create 17,000 direct jobs, plus 20,000 more indirect jobs in the sector and related industries.

“In the next 25 years, the construction will have an economic impact equal to 180 Super Bowls,” says the Texas Central website.

All this is made possible thanks to what Texas Central CEO Carlos Aguilar has called “a revolutionary project, as well as an opportunity for a more modern transport offer in the country.” 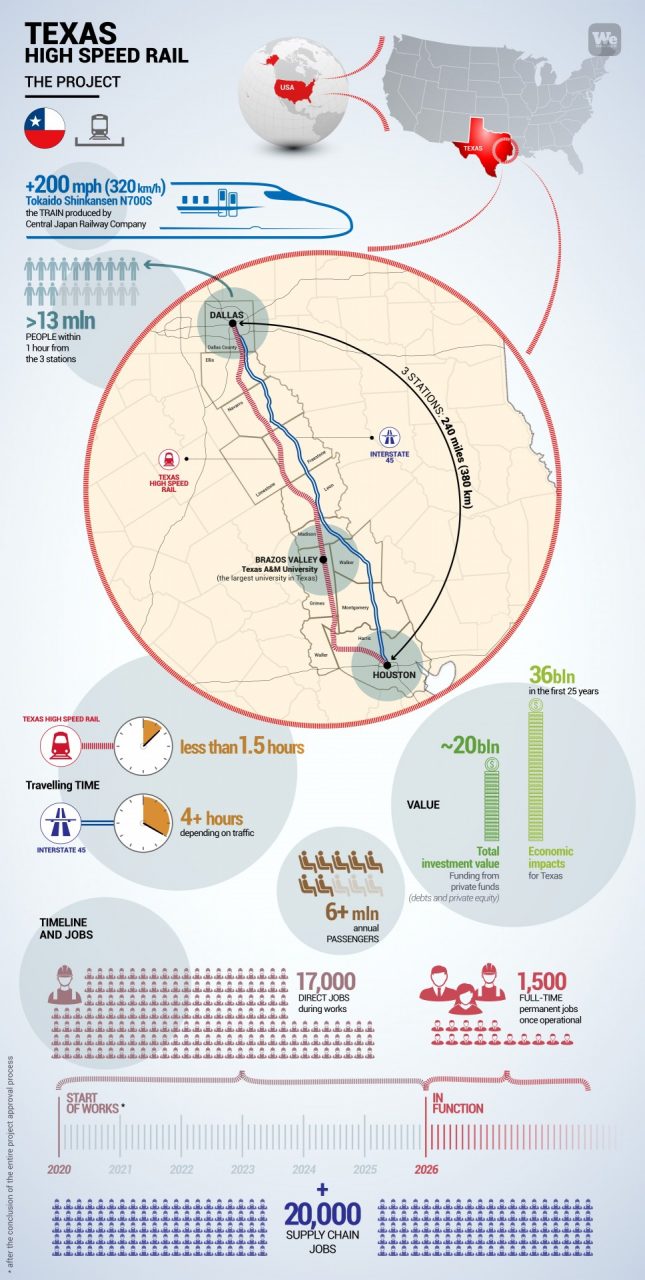 Three stations (Houston, Brazos Valley and Dallas) on the line have a potential of 13 million riders by 2050, according to Texas Central. Millions of Texans will live less than an hour’s journey from the three stops planned on the high-speed train route, which crosses some of the most populous and dynamic areas of the state.

The train will be a sustainable alternative to the journey on Interstate 45 which usually takes an average of four hours between the two cities. Once the work is completed, the four hours will be reduced to under 90 minutes, thanks to the Tokaido Shinkansen N700S, the bullet train produced by Central Japan Railway Company capable of reaching a speed of 320 km/h (198 mph).

At one end is Houston, the largest city in Texas, famous worldwide for being a vital center of the American energy industry; at the other end is Dallas-Fort Worth, the largest inland metropolitan area in the United States of America by surface and one of the most important drivers of economic growth. In the middle is the intermediate stop of Brazos Valley, which would be a rural county if it were not for Texas A&M University, founded in 1876 and now the second largest college in the U.S. in terms of enrollment.

Thanks to the Brazos Valley stop, students, researchers, academics, entrepreneurs can travel to the state’s main cities.

A green light from the Federal Railroad Administration

In the last few days, the Federal Railroad Administration published the final version of the Rule of Particular Applicability (RPA) and the Record of Decision (ROD).

The first act provides guidelines for the regulations to be followed in the construction of the Texas Central Railway, from safety to signage, and gives the go-ahead for the Texas line to use the Tokaido Shinkansen high-speed system, known to be one of the safest and most efficient in the world.

The Record of Decision, on the other hand, represents the completion of the authorization process in terms of environmental impact started in 2014 and required by the National Environmental Policy Act.

“This is the moment we have been working towards,” said Carlos Aguilar, CEO of Texas Central Railroad. “The release of the final RPA and ROD by the Federal Railroad Administration represents years of work by countless individuals, affirming a very thorough and careful federal regulatory process that will make the Texas Central Railroad the first high-speed rail system to be implemented in the United States.”

Private financing to build a work for the common good

The Texas High-Speed Train is a work designed to transform mobility between two of the fastest-growing cities in the U.S. in one of the richest states in the country (if it were independent, Texas would be the 12th largest economy in the world). The Texas High-Speed Train will become a tool to accelerate development. This ambitious goal is being pursued by private investors, as reiterated by Texas Central, which has repeatedly stated its decision to give up state and federal subsidies.

The Webuild Group and its American subsidiary Lane Construction Corporation have been awarded the contract to carry out the civil engineering works, including the design and construction of the viaduct and embankment sections along the entire track, the installation of the track system and the alignment and construction of all buildings and services for the maintenance and storage of railway material. Webuild Group and Lane have a track record of 13,637 kilometers (8,473 miles) of railways and subways built over the years, are contributing their expertise and know how to this strategic project.

This enormous experience will be put to good use by the Texas High-Speed Train, a bullet train speeding towards the future of Texas and the United States of America.

The Rogun Dam: a strategic hydropower plant in Tajikistan