A container worth $150 billion

History of the Suez Canal: a disputed strategic enterprise

The crisis involving the just-dislodged ship in the Suez Canal has shined a spotlight on both the complexity and the importance of maritime trade. In a system already shaken up by the COVID-19 pandemic, the global supply chain has suddenly faced a new risk.  On March 23, 2021, when shipping company Evergreen’s Ever Given, a 400-meter-long (1312 meters), 59-meter-wide (194 meters), 220,000-ton giant was struck by a sandstorm, this vessel almost as long as the Empire State Building is tall carrying over 20,000 containers spun around sideways. This completely blocked the Egyptian canal, creating immediate chaos. Hundreds of ships on either side of the canal were stuck in line, and the traffic jam caused delivery delays across sectors: oil, cars, electronics, food, and medicines.

About 10% of international trade passes through the 193-kilometre-long canal (120 mile), which connects the Mediterranean to the Red Sea. It first became operational more than 150 years ago, on November 17, 1869, but was expanded in 2015 to allow for dual transit. According to Lloyd’s List, a journal specializing in shipping, some $9.6 billion (€7.3 billion ) in goods passes through the Suez Canal daily, almost equally distributed between ships heading west and those heading east. Additionally, as many as 1.9 million barrels of oil pass through the Suez Canal daily, making up about 7% of all sea-transported oil. The blockade caused by the Ever Given debacle has led to a global increase in crude oil prices, with repercussions felt from Asia to America. 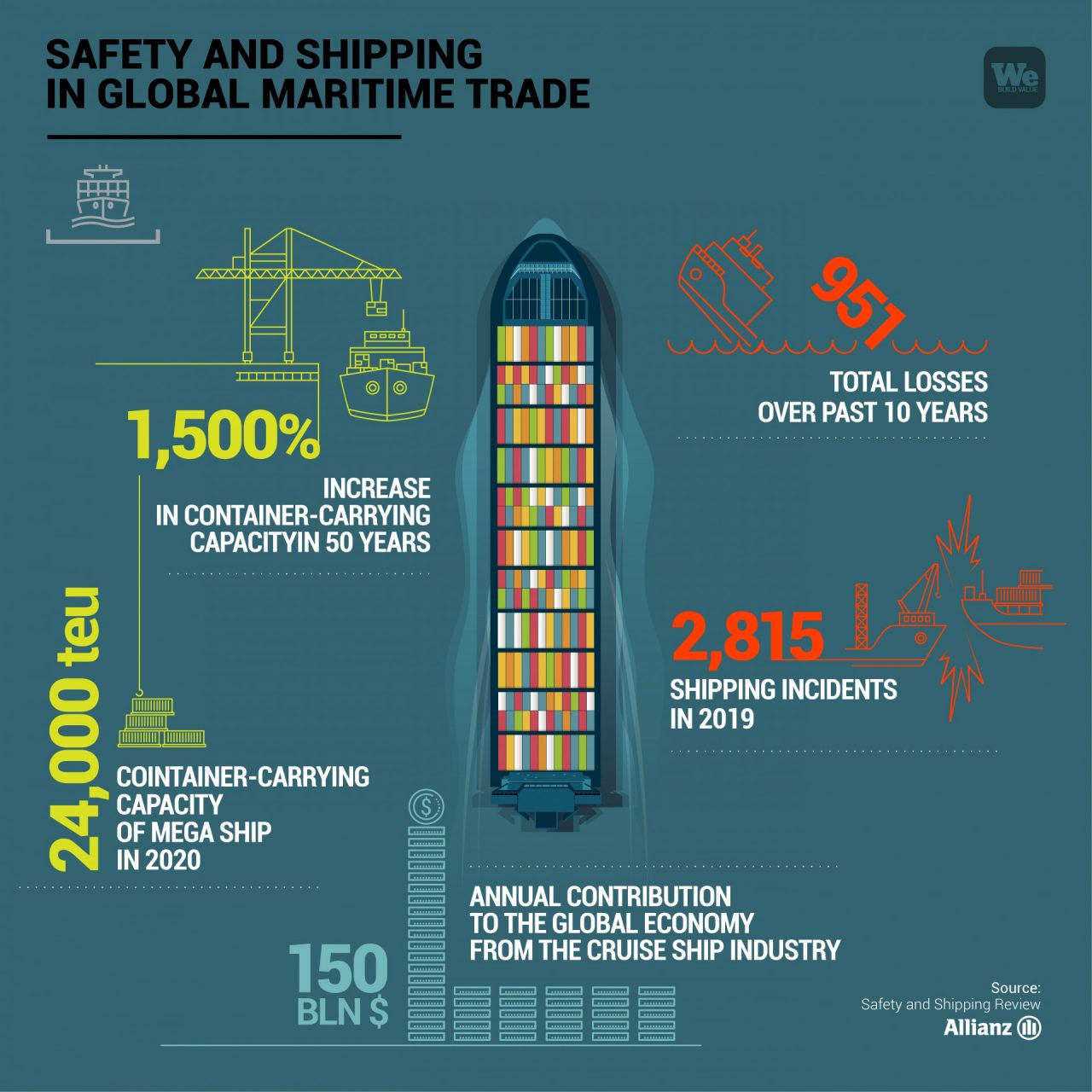 Container ships: a response to the demands of the modern market

Containerisation continues to grow exponentially, and the more global trade depends on it, the more vulnerable the situation becomes. In the last few decades, global production has moved toward a “just-in-time” formula in all sectors: cars, cell phones, household products, even pharmaceuticals. Major storage centers and their well-stocked warehouses often leave the distribution step suspended until the market effectively demands it. As soon as the coronavirus pandemic began to spread, trade went into crisis, particularly maritime trade (also factoring in the halt of air travel). The supply chain was strained to the point that supermarket shelves were empty, hospitals were stuck without gloves and masks, and entire areas of the planet lacked important supplies. Even the availability of containers themselves has been put under pressure.

The idea of containerisation is attributed to American maritime entrepreneur Malcolm McLean, who took note of the enormous savings in time and money to be had by loading ships with containers directly from trucks, rather than handling and stowing goods individually. Since its inception in 1956, containerisation has revolutionsed the entire freight transportation system. According to insurer Allianz Global Corporate & Specialty (AGCS), container ship capacity has increased by 1,500% over the last century, and even doubled in the last decade. The same company calculates higher costs of between $6 billion (€7.3 billion) and $10 billion (€8.5 billion) during the Ever Given blockade, with a 0.2-0.4% decrease in world trade growth for each week of immobilisation (before the container ship was dislodged earlier this week).

According to International Chamber of Shipping estimates, of the more than 50,000 ships operating daily in the various oceans, at least 17,000 are container ships, while the number of containers scattered around the world is more elusive: according to various research bodies, the figures vary from 5 to 170 million. A good portion of these (at least 20 million) are likely in use for navigation. Others are likely in use on trains, trucks and port offloads, and still others abandoned or no longer in use for transport. Increases in ship cargo capacities have made the shape of these “sea giants” more vertical. More importantly, they have led to substantial reductions in retail prices, making more goods accessible to more people, while also minimising harmful emissions from ocean crossings via the world’s various shortcuts.

In 2016, a new set of sluices built by a Webuild Group-led European consortium was inaugurated, allowing for easier transit of large ships through the Panama Canal. The importance of major infrastructures like the Panama and Suez Canals is attested to in the GATS (General Agreement on Trades and Services) section of the World Trade Organisation’s most recent report, which indicated that the shipping industry generated more than $150 billion (€127 billion) for the world economy in 2019, supporting more than one million jobs.

Allianz’s study also reveals the damages suffered by ships, due to breakdowns, storms, or assaults by pirates. From 2010 to 2019, more than 950 shipping losses were reported, with a 68% decrease over the decade, due to new technologies in ships, stricter surveillance of high-risk areas, and the introduction of safer routes like the new Panama Canal that avoid dangerous and lengthy circumnavigations.

Over the past 50 years, which the study examines, capacity has grown from 1,530 containers aboard the largest ship in 1968, the Encounter Bay, to 11,000 on the Emma Maersk in 2006, to 24,000 on the latest generation of freighters. In ascending order, the ships are now classified as Small Feeder, Feeder, Feedermax, Panamax, Post Panamax, New Panamax and Ultra Large Container Vessel (ULCV). The record is held by two megaships, the HMM Algeciras and the HMM Oslo, 400 meters long (399.99, to be exact, or 1312 feet), 61.5 meters (202 feet) wide, with a draught of 33.2 meters (109 feet) and able to carry 24,000 containers stacked one on top of the other, although “only” 23,792 for the first one. Built by Daewoo Shipbuilding and Marine Engineering, both fly the Panamanian flag, as does the Ever Given, which was built in 2018 and considered the tenth largest ship in the world along with her sisters Ever Golden, Goods, Genius and Gifted.

The Scandinavian peninsula’s great leap into the future