Worksites will open in 2023 on four new prisons

Urban requalification is changing the Bronx

It was one of the last things that former Mayor Bill de Blasio did before he left office. Today, it is at the top of the list for New York City’s new administration, led by Mayor Eric Leroy Adams.

The former mayor and the city’s Department of Design and Construction (DDC) have shortlisted six joint ventures to prepare proposals for the design and construction of four new correctional facilities in as many boroughs of the Big Apple.

The time horizon is 2027, when the vast and aging Rikers Island prison will be closed. The prisons must be ready by that date, according to the city administration. They will be designed according to the most modern criteria of sustainability, not only for the buildings themselves, but also for the living conditions of inmates.

The project promises to become a major challenge for the city, for both the impact the new works will have on prison construction in the United States, and because of their cost. The projected budget for the construction of each institution is around $1.5-$1.8 billion (€1.3-€1.5 billion), with the overall project total set to be at least $6 billion (€5.2 billion).

New prisons in New York will be “borough-based"

Manhattan, Brooklyn, Queens, Bronx: these are the four New York City boroughs picked to host these “prisons of the future.” For each of them, one or more joint ventures have been selected and are working on the final designs. Some of the details have already been leaked, such as the fact that each high-rise prison will be equipped with 886 beds. 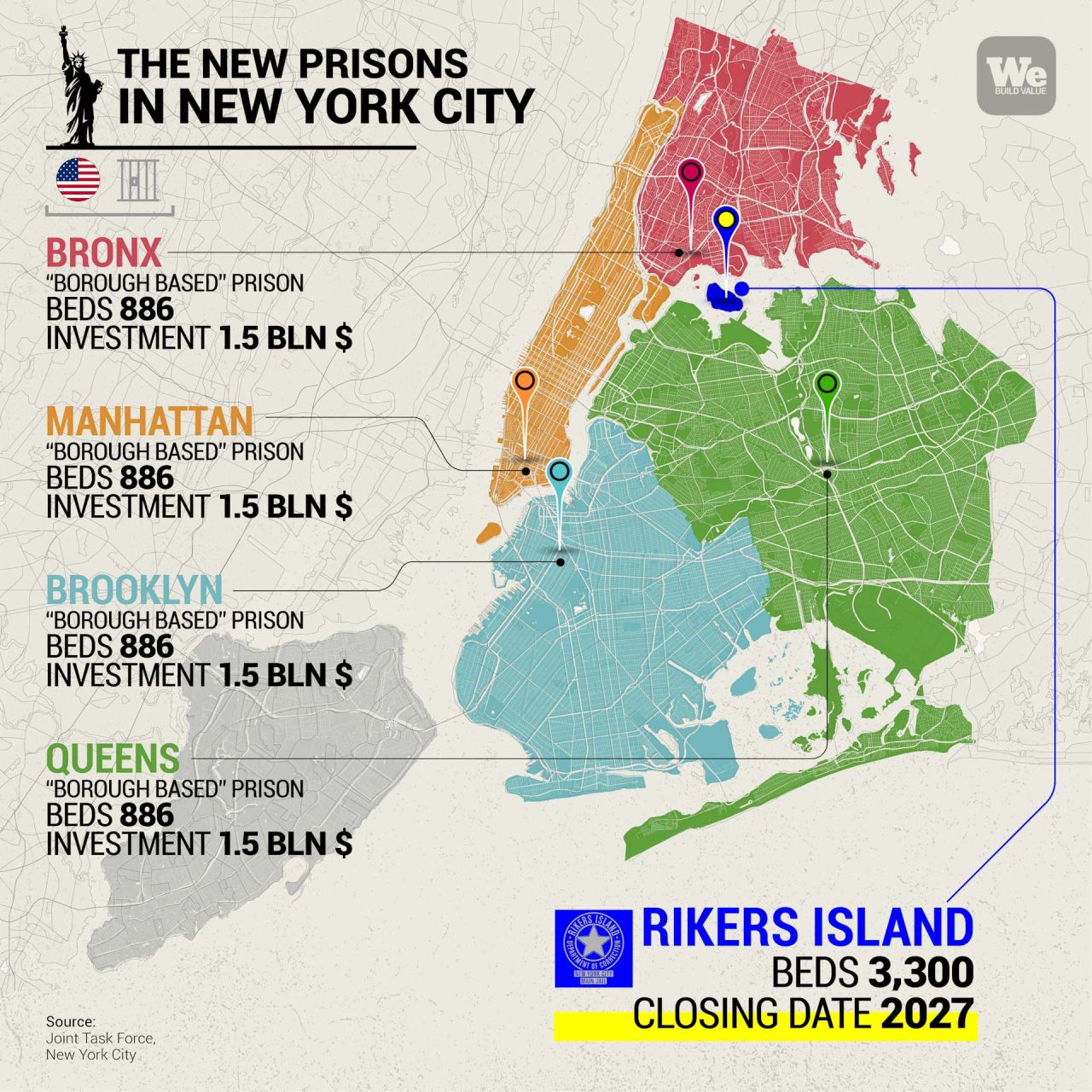 “The response from the design community is encouraging given the scale and importance of this incredible project,” said NYC Department of Correction Commissioner Vincent Schiraldi in a press release.

According to the city administration, the presence of “borough-based” prisons will allow for a more humane response to the incarceration and re-education needs of New York’s population. The goal is avoid creating a single, massive new prison, which is complicated to manage and destined to become a mass incarceration institution where recovery and training of its men and women are complex if not impossible.

The debate for a new sustainable and inclusive prison building began in New York City in the spring of 2017, with the decision to close Rikers Island Correctional Facility.

Since then, the city administration has been working on a project for “borough-based” penitentiaries, allocated in individual neighborhoods, with a total capacity of about 3,300 beds, suitable for today’s lower crime rates.

These prisons — according to the project’s official website (https://rikers.cityofnewyork.us/nyc-borough-based-jails/) — will be built to ensure maximum security for inmates and prison workers, but also to facilitate internal training, meetings with family members, medical care, and social rehabilitation programs in general.

Sustainable construction sites for the prisons of the future

New York City’s new correctional facilities aim to be innovational not only in terms of improving inmates’ social rehabilitation, but also starting from the construction site. According to the city government’s plans, work will officially begin in 2023 and be completed in 2027. This will potentially disrupt the city’s routine when the construction sites open in Manhattan, Brooklyn, the Bronx and Queens. The worksites are designed to minimize the impact on metropolitan life, as well as air pollution.

According to the plan drawn up by the “Joint Task Force” for the Manhattan prison in September 2021, the worksite must respect a series of parameters to reduce noise, vibrations, as well as the levels of dust in the air.

Not only that. During the construction, all the works will be embellished with temporary art installations featuring green and sustainability themes, designed to send a message: even a prison building can be modern and sustainable. And above all, on a human scale.

Tegel, Berlin’s Cold War-era airport, will be re-born as a technology park