Earthquakes in USA: the risks for infrastructures

U.S. infrastructure needs massive investments to protect itself from the risk of an earthquake

Tens of thousands of kilometres of roads and highways. Nearly 600,000 bridges and a dizzying number of infrastructure of every type. A vast network stretching across the United States at risk of an earthquake, especially along the Pacific Coast. It is a big challenge for the country: to replace or retrofit this network in order to respond better to such an eventuality.

It is a matter addressed by the Congressional Research Service in Washington, D.C., in a report published by three experts.

Earthquakes in Usa: the state of infrastructures

It insists that investment is the only way to avoid suffering heavy damage from an earthquake. «Existing highway structures vulnerable to earthquake hazards can be replaced, retrofitted, abandoned, or simply left alone. The decision with respect to each structure generally is up to state governments and other infrastructure owners; most importantly, state governments determine whether to pursue retrofitting or replacement as they set priorities for using federal and state highway funds.»

The report in any case emphasizes two truths: the first is the spread of seismic risk across the country, while the second is the need for targeted interventions that require big investments in the sector.

«A study of the New Madrid seismic zone (in southern and mid-western United States) found nearly 13,000 vulnerable bridges in seven states that would likely require retrofitting to satisfy the current seismic bridge design standards», it says.
The report also cites the Bridge Seismic Retrofit Program of California, the most comprehensive in the history of the country. After the earthquake of Loma Prieta in 1989 and that of Northbridge in 1994, the state did work on 2,200 bridges for $11 billion. Beyond California, where the Bay Bridge was reconstructed in order to be earthquake proof, the matter concerns a good part of the U.S. territory.

The Seismological Society of America recently reiterated that 143 million citizens in 48 states lived under the threat of an earthquake. It estimates the economic damage could reach an annual $4.5 billion, 80% of which in only three states: California, Oregon and Washington. The West Coast is the U.S. region most at risk because the area of the Pacific Ocean – including Asia – is where 81% of earthquakes are recorded in the world.

The impact of such an eventuality threatens to be devastating for old infrastructure that does not conform with the latest anti-seismic norms. To emphasize the point, the National Center for Earthquake Engineering Research says 65% of nearly 600,000 bridges in the United States were built before 1971. Bridges are a major determinant of the seismic performance of a highway system and national seismic bridge design standards have been in place only since 1992. 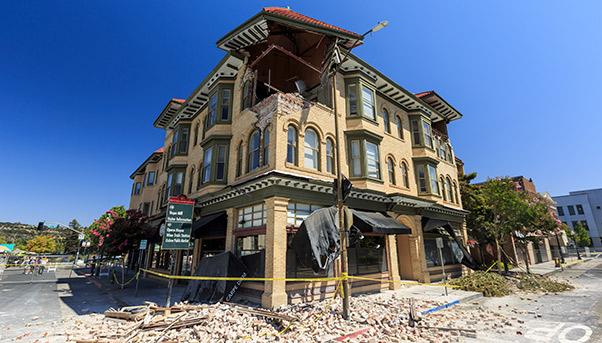 The poor state of the country’s infrastructure is also emphasized by the American Society of Civil Engineers (ASCE), which publishes a scorecard every four years. In the last one from 2013, although it did not fail any of the various infrastructure systems (bridges, roads, schools, for instance), it gave low marks to all of them. It highlighted the need for massive investments focused on modernizing the oldest structures if not build new ones to replace them where necessary.

In addition to protecting the lives of millions of citizens, modernising structures or building new ones would create jobs. A recent report by the Brookings Institution entitled “Infrastructure Skills: Knowledge, tools and training to increase opportunity” reveals how 14.5 million people are employed in the infrastructure of the United States, or 11% of the total workforce. And a good number of this workforce is aging, with nearly three million in need of being replaced during the next decade. So a massive investment in infrastructure would accelerate this change, lending a boost to the labor force.

The challenge of building complex and modern public works is reducing the risk of a massive impact from an earthquake. That is why research and innovation are two fundamental elements. The FAST Act, approved by Congress late last year, has earmarked an annual $125 million for Highway Research and Development Program that would look at the most efficient techniques to reduce the infrastructure’s vulnerability.

As noted by the Congressional Research Service, it is nevertheless nearly impossible to draw a complete map of the country’s infrastructure network because it is so vast and complex. Many investments have been made and many others will be done soon as the country rises to one of the biggest challenges in decades.

A Metro for the Greater Paris Area

5 interesting bridges of the world that benefit the economy