The area stretching from the Port of Los Angeles to the Port of Long Beach has always stood out for its rows of shipping containers. Lines of large trucks are a familiar site along the Long Beach Freeway Interstate 710, which connects the two largest ports of the United States, part of the gargantuan urban sprawl of Los Angeles County that is home to over 10 million people.

The twin ports – Los Angeles, the nation’s largest; Long Beach, the second – handle between 18 and 20 million containers a year. Almost one container for each of the LA/LB residents, as they say around here.

The COVID-19 virus has created a surreal scenario here too. The new Gerald Desmond Bridge Replacement Project crossing over the entry way to the port has been operational for a few months The view from its central span 62 metres (205 feet, or 18 stories) above the water is the ideal vantage point for us to see what sort of changes the bridge will bring.

If we could look at them from atop the bridge right now, the containers would no longer form compact rows. Those small coloured rectangles, as if in a sort of time-lapse in reverse, disappear without being replaced. In the maze of junctions and deserted roads, only industrial vehicles, far apart from each other, circulate.

Port operations did not stop, but were brought under control to combat the spread of the virus. On the cranes, in the marshalling yards, work continued.

The new Gerald Desmond Bridge Replacement Project is an imposing and elegant infrastructure being built by Salini Impregilo (Webuild) together with Shimmick (Aecom Group) and FCC to replace the old bridge. Work has continued, with more stringent safety rules put in place to contain the spread of the invisible enemy.

The project is of vital importance for North America, because 15% of goods that enter the United States by sea are now trucked over that 52-year-old bridge, which can no longer bear the heavy traffic. It is also now too low for the larger so called “post-Panamax” container ships, which have become the shipping industry’s “new normal” after the Panama Canal was widened in 2016 by a European consortium led by Salini Impregilo (Webuild). For these two reasons, the Gerald Desmond Bridge, built in 1968, is now obsolete.

The Port of Long Beach, with 50 kilometres (31 miles) of waterfront, 10 piers, and 66 post-Panamax cranes, is one of the few U.S. ports to have deep enough moorings to accommodate a new generation of giant ships. But the port’s customers could not benefit from this new commercial traffic because the bridge had become a barrier for these super ships.

The design of the new bridge has stood out from the beginning for the technical and organizational solutions typical of strategic infrastructures, where construction can be carried out without stopping rail, road, and naval traffic.

The new bridge has been included by the U.S. government in the Federal Strategic Highway Network, i.e. in the list of projects that for their impact are priorities in the infrastructure development of the country.

The Port of Long Beach has placed the new bridge and the reconfiguration of the terminal areas at the centre of its development plans, pursuing two goals: to be recognized as the most reliable disembarkation/boarding point on the West Coast and at the same time the most environmentally friendly port in the United States, having adopted a green policy since 2005. Building the new infrastructure will generate around 3,000 jobs. When completed, it will decongest traffic thanks to the three lanes in each direction.

Los Angeles Ports and their contribution to Long Beach’s development

Long Beach, with 480,000 inhabitants, owes its development to shipping because — unlike Los Angeles – it is next to a harbor.

“Our opportunities for growth are in trade, aerospace, and defense,” said John Keisler, Director of Long Beach Economic Development to the California Political Review.

The LA/LB port system handles about 37% of all goods transported by sea entering the United States, with over $312 billion in trade value.

“Our two ports are the fastest way to move goods between Asia and U.S. markets and manufacturers,” said Port of Long Beach Executive Director Mario Cordero, during the signing of a recent cooperation agreement with the Port of Los Angeles. 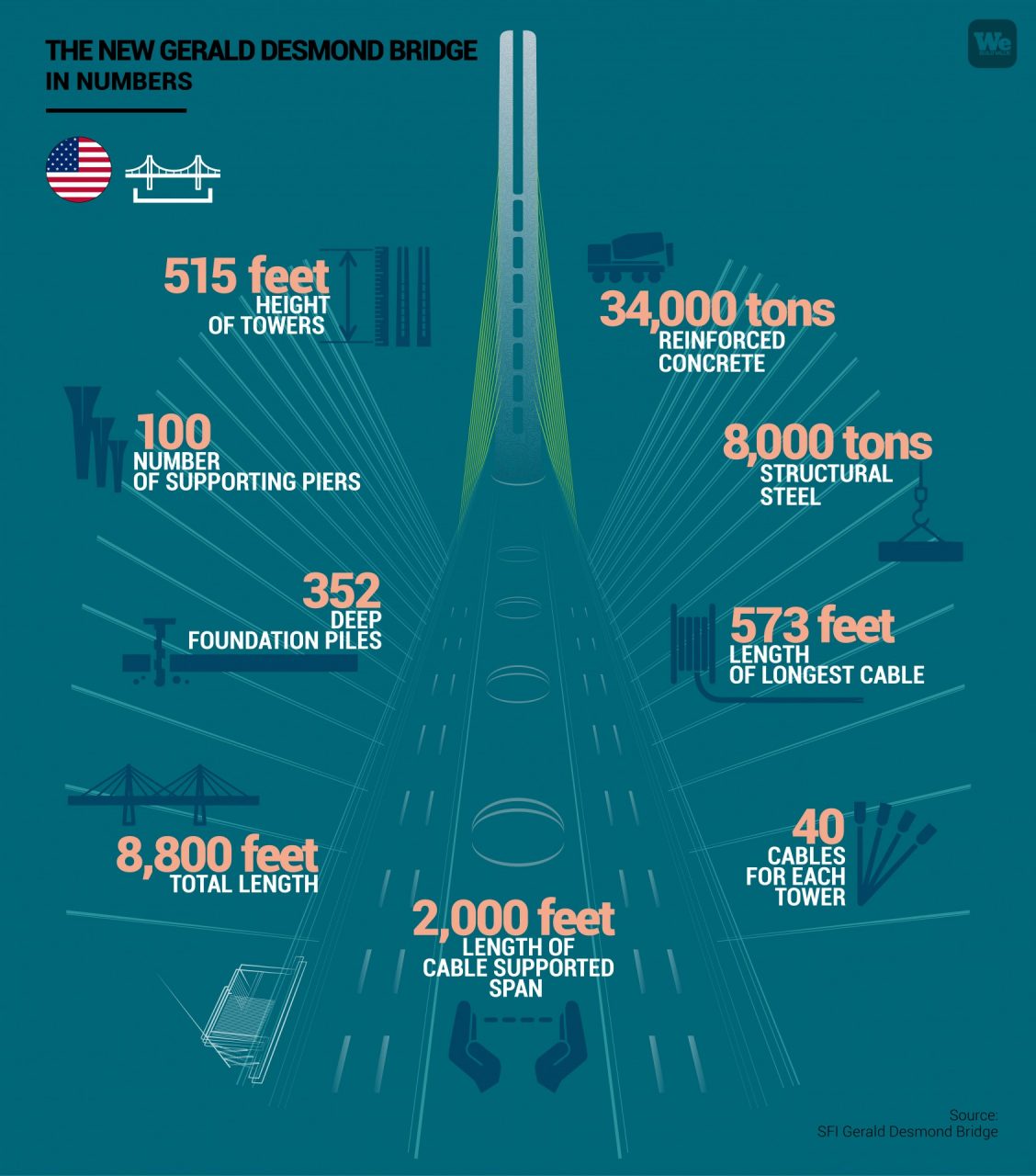 Long Beach, the area that wants to grow

Long Beach is in continuous development, cranes mingle with the urban landscape, building residences, huge distribution hubs and new shopping centres. The streets are being redeveloped. From the new bridge, you can see a huge square with tens of thousands of cars lined up side by side.

Toyota has one of its most important logistics centres in Pier B of the port. Each of these vehicles is customised in this centre before being delivered to the customer. The process, which is repeated once a week, begins with the arrival of a large roll-on/roll-off ship loaded with Toyota, Lexus and Scion automobiles to be finished. Produced in Japan and destined for the southwest of the United States, about 3,000 vehicles are unloaded each day in Long Beach.

“My first time here I was very impressed by the operation. It is a choreographed chaos between the amount of people and the vehicles movement within this job,” said Jonathan Gurr, Toyota’s Logistic Planning Manager to the local television channel LBTV.

A synchronized dance of hundreds of technicians boarding the ship, each of them boarding a car and driving it to the workshop for the finishing touches:  brakes, wheels, protection systems, special alarms, linings and internal finishing. Each year Toyota Logistics Services delivers over 200,000 vehicles to retailers. As many as 13 Toyota delivery centres in the United States are supplied from Long Beach.

Long Beach port handles over $200 billion worth of trade annually and supports 2.6 million trade-related jobs in the United States, including 575,000 in Southern California and 1 in 5 jobs in Long Beach.

The new Gerald Desmond Bridge is crucial for planning and achieving a successful future.

The two towers of the new Gerald Desmond Bridge will become the tallest of their kind in the United States, becoming the new symbol of the American dream.

Before becoming the seventh largest city in California and the second largest U.S. port, Long Beach was home to the Navy and naval shipyards during World War II. It was also home to the Douglas Aircraft plant, which continuously churned out C-47 Skytrain cargo and A-20 bombers to supply the American arsenal that clashed with Japan in a struggle for domination of the Pacific.

To support this effort, thousands of women came to work at the Douglas Aircraft plant while their husbands were at war, immortalized by the song “Rosie the Riveter.” One of the original “Rosies” is from Long Beach and still lives there.

“I was 95 years old when I stopped working and was still building airplanes with rivets. They closed the plant, so I didn’t retire, I was fired like the others,” Elinor Otto told local broadcaster ABC-7. Elinor, recognized as the last living Rosie the Riveter, celebrated her 100th birthday in Long Beach in October 2019.