The country’s is launching its largest-ever railway investment 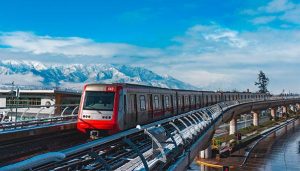 Chile’s largest-ever railway project has been dubbed “Chile on Rails.” The government has decided to transform the country’s transport network by focusing primarily on developing its neglected trains.
This $5 billion project has its roots in Chile’s history, said President Sebastian Piñera.
«The truth is that Chileans have a true love story with trains», said Chile’s President Sebastian Piñera. «I believe that all Chileans have memories, anecdotes and nostalgia for trains. And although the cities of our country were founded looking for the most favourable places in the course of the rivers, the development of our country took place through the railroad».

Chileans may have nostalgia for trains, but their modern network is plagued by serious delays, both in the maintenance of existing lines and in the development of new routes. It needs to be modernised to meet the needs of people and freight shippers. According to official data of the Chilean government, Chile’s railway system currently carries 50 million people annually, a very low figure that has been falling in recent years. That’s why the government is launching a massive investment plan that it hopes will reverse the trend, bring the rail network back to centre stage as a tool for growth and development, investing in sustainable mobility in a country that has shown great attention to the environment for years.

Investments in Chile’s railways: a focus on Santiago

The investment program starts in 2020. The goal is to invest $5 billion to carry out and maintain 27 infrastructure projects that should increase both passenger and freight transport.
«We’re making a great effort for the railways to not only improve the quality of life of our fellow countrymen, but also make a great contribution to the development of our country», President Piñera told online newspaper Latercera in an interview.

According to the government’s program, works will begin this year and end in 2027, when the number of passengers on Chile’s railways will triple from 50 to 150 million, and the volume of goods transported will double to 21 million tons.
A substantial share of investments, 44%, will involve the capital Santiago, while the remainder will be used to improve the rail network in the other provinces, covering a total of 1,000 kilometres (621 miles) of track.

In particular, one of the most significant projects will be the creation of a railway connection between the central station of Santiago and the city of Melipilla, southwest of the capital. The new 61 kilometres (38 miles) of railway will reduce the journey time by two hours for the 50 million people it serves each year.

Another rail link will connect Santiago’s city centre with the Arturo Merino Benitez International Airport, which has an annual capacity of 30 million passengers after its renovation. Lastly, the Santiago-Batuco-Tiltit line is under construction, and will connect six neighborhoods and carry 17 million people each year.
The most crucial project is the Santiago-San Antonio-Valparaìso line, which will increase both cargo and passenger traffic between the countryside and the sea, as well as connect the two largest cities in the country. This should help bolster regional integration as well as boost exports.

An urgent need for investment

“Chile on Rails” is an urgent necessity. Years of neglect has made Chile’s infrastructure network into one of the world’s most backward.
According to the 2019 Global Competitiveness Report compiled by the World Economic Forum, Chile occupies 70th place out of 103 countries for the quality its railway infrastructure, and 61st place for the efficiency of train services.

During 2019, the situation worsened due to the chain of violent strikes and clashes, which exploded after the Santiago metro said it would raise fare prices. The strikes have forced the government to cut its GDP growth estimate to 2.2% in 2019, from down from an official 4% in 2018, with a very serious impact on the construction industry. The Chilean Chamber of Construction photographed the situation last December in a report on the condition of infrastructure and investments. About half of the entrepreneurs surveyed said the October protests had a negative impact on current projects, and 34% fear the social unrest may damage the success of future projects.

Towards a sustainable economy

The plan to improve Chile’s railway network not only helps meet the needs of riders, but is also part of a long-term vision to transform Chile’s economy in a more sustainable key.
The government aims to make the country carbon-neutral by 2050. So in addition to substantial investments in renewable energies, the development of sustainable mobility is also part of this big picture.