China: $3.6 trillion to get started again

A massive infrastructure investment plan to recover from the coronavirus crisis

A massive infrastructure investment plan to recover from the coronavirus crisis ">

Coronavirus: investments and health protection to overcome the emergency

While the scientific world is working to find a vaccine capable of stopping the coronavirus, China has already experimented with a cure for its stuttering economy: new infrastructure investment.

The inevitable slowdown of GDP during the lockdown of Wuhan and Beijing will be “cured” with unprecedented spending of $3.6 trillion over the next five years, with development of new infrastructure at the top of the list.

China’s stimulus plan: highways at the top of list

The cumulative plans launched by several provinces foresee a massive financial stimulus in the coming months with a budget of $500 billion already for 2020, 70% of which will be allocated exclusively to infrastructure. Work will resume on improvements to the country’s 500 main motorways.

These local government investment plans are designed to achieve two goals: on the one hand, to boost the national GDP and, on the other, to promote the development of the many rural areas hitherto excluded from the infrastructure boom by creating efficient road links to urban economic locomotives.

China’s South China Morning Post reported that 25 of the country’s 31 provinces have already published a list of infrastructure works they consider to be strategic to restart the economy.

According to figures published in the National Business Daily, the Sichuan province, the sixth largest in the country in economic terms, has a list of 700 strategic projects for a total value of $629 billion, for an annual investment of $85 billion. These include a railway linking the province with the Tibet Autonomous Region, a new airport for the city of Leshan, and new energy transmission lines reaching the most isolated villages.

Like Sichuan, Fujian Province has also been one of the most active in responding to the government’s appeal and has submitted a list of 1,567 infrastructure and industrial projects that would require investments of $543 billion. In addition to investments in more traditional infrastructure, projects submitted include spending on innovation, new technologies, broadband and smart cities.

At the heart of China’s stimulus plan is the conviction that it is time to take anti-cyclical measures to give the country’s economy a strong boost. Analysts at HSBC Holdings Plc said in a recent report that a 1% increase in infrastructure investment corresponds to a 0.1% increase in national GDP. This means that the investment boost provided by the new plans would need to be 10% to 12% higher than the previous spending levels to allow GDP to grow by 5.7% in 2020, thus approaching the government’s initial target of 6%.

HSBC analysts expect a 4.1% increase economic growth in the first quarter of 2020, due to the impact of the virus, and they cut their full year forecast to 5.3% growth from a previous 5.8%.

This massive spending plan will be funded by the central authorities in Beijing, and also by money raised in bond sales. These proceeds will be directly allocated to local authorities, which will be responsible for investing them in the projects that have an immediate impact, both on the economy and on jobs. 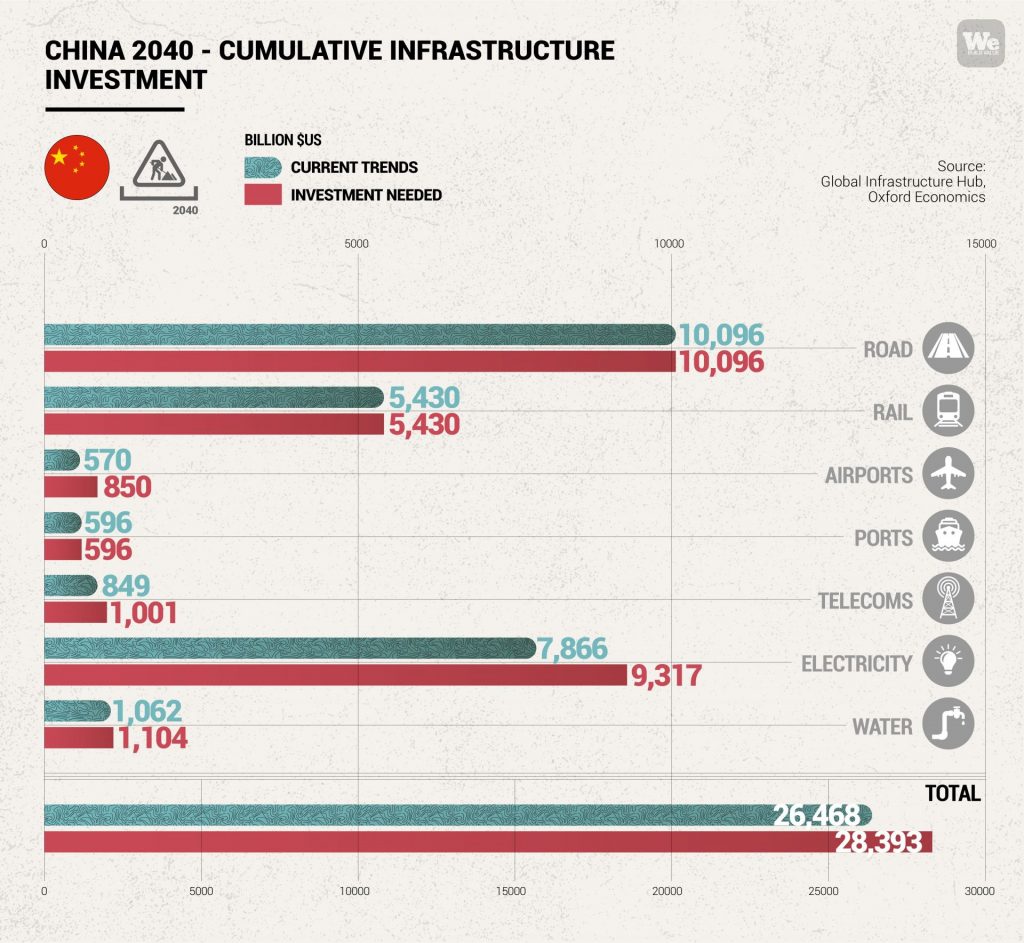 The precedent of the 2008 crisis

This is not the first time that China implemented an anti-cyclical spending programme to stimulate the economy. During the global financial crisis of 2008 touched off by the Lehman Brothers bankruptcy, the Chinese government launched a $572 billion stimulus package to help boost the national economy. This spending was accompanied by interest rate cuts for loans to families and businesses, which encouraged spending and investment. These robust measures allowed the country not to be overwhelmed by the effects of the financial crisis and to continue on the road to growth, consolidating its position as the productive locomotive of Asia and launching China on the path to becoming the second largest economy in the world.

Reports coming in from China confirm that, after the peak of the coronavirus contagion, the crisis seems to be contained and that the country is getting started again. Not only have most of the large factories resumed production, but also transport, especially rail freight transport, has returned almost to normal.

In the coming months, China’s great challenge will probably shift back from the protecting the health of its citizens to promoting their economic well-being. The goal of this enormous financial effort is to achieve the target China set several years ago: to double its 2010 GDP by the end of 2020. A promise that the Beijing government intends to keep, in spite of everything.

Covid-19: infrastructure spending to get the U.S. economy running again