Australia picks a “green infrastructure” path for its future

Australia’s government is upping the ante. In its 2020-2021 budget, Treasury Minister Josh Frydenberg and Australian Central Bank Governor Philip Lowe have increased their AU$100 billion (US$75 billion) ten-year infrastructure investment package, in order to help the country recover from the economic crisis caused by the Covid-19 pandemic.

Roads, railways, airports, metro lines, water infrastructure: these are just some of the items in the package that the government has added to its previous spending plan as a response to the Covid crisis.

The government said in October it has increased its previous AU$100 billion (US$75 billion) spending package for strategic national infrastructure to AU$110 billion (over US$82 billion) in the wake of the Covid-19 pandemic.

This is a test of strength for the Australian government, which focuses on infrastructure investments as an anti-cyclical measure that can create new jobs. According to government calculations, the infrastructure projects already underway in the country will provide work to 100,000 people, directly and indirectly. The new allocations called for by the anti-Covid recovery plan will create an additional 40,000 direct and indirect jobs. This is the starting point to leave the darkest months of the pandemic behind, and rewrite the future of Australia.

Infrastructure investments will give the economy a much-needed boost so it can make a fresh start after the Covid-19 crisis. The injection of more financial resources for infrastructure in the 2020-2021 Federal Budget is in addition to an infrastructure plan already approved by the government last year.

Overall, the government has added a total of AU$10 billion (over US$7 billion) in extra spending since the onset of Covid-19 for the development of new infrastructure projects.

That does not include a further AU$2 billion (US$1.5 billion) to be allocated to programmes for the maintenance and safety of roads, an item also included in the Infrastructure Priority List that the country draws up every year. Another AU$2 billion will be invested in water infrastructure, which must be modernised to cope with population growth in large cities.

A smaller part of investments (AU$250 million, or US$188 million) will be used to modernise infrastructure for recycling and, in particular, to programs for sustainable reuse of waste. 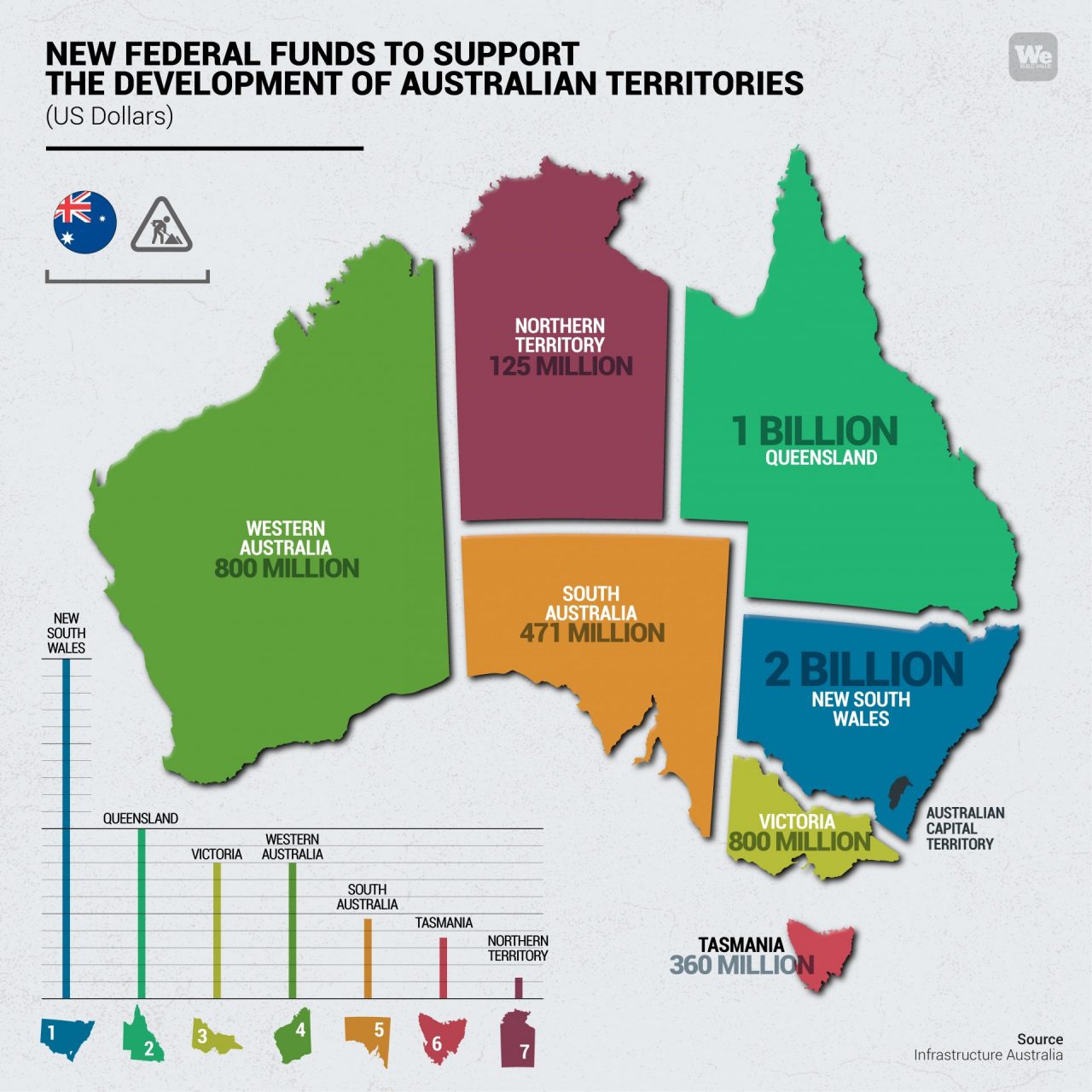 Federal funds to support the development of Australian states

The federal government will allocate the AU$110 billion infrastructure funds across all of the nation’s states, it said it its budget plan.

The idea is to respond in an integrated way to the states’ demand for infrastructure, starting with those where the largest cities are located. Melbourne, Perth, Sydney, and Brisbane are all seeing accelerated development that — despite the natural slowdown linked to the health crisis — are having a strong impact on lifestyles of people who live there. The increase in population leads to a greater demand for efficient transport infrastructures, essential for reducing congestion as well as air pollution.

The extra spending approved by the government gives an increasingly important role to Infrastructure Australia, the federal agency responsible for monitoring the state of Australian infrastructure and supporting recovery and revitalisation projects.

The government has increased the funds allocated to Infrastructure Australia, and doubled its staff, which over the next four years must develop new projects able to support economic recovery from the Covid-19 crisis.

This avalanche of new investments announced by the Australian government since the beginning of the Covid crisis right up to the last few weeks is evident in the frenetic pace of major worksites across the country. Some of these construction sites are large infrastructure projects where work has been underway for years; others are new, included in the list of national priorities with the aim of reviving the country’s economy.

Among the major projects underway is Snowy 2.0 (created by Webuild Group and the Australian company Clough), a super-sized hydroelectric plant that produces clean energy through the expansion of the Snowy Mountains Hydro-Electric Scheme.

Sustainable mobility projects are a focus, such as the Cross River Rail, the subway that will cross the center of Brisbane for a length of 10.2 kilometers (6.3 miles), or Perth’s Forrestfield-Airport Link, a light railway built by a joint venture led by Webuild Group, employing 3,000 workers and with the support of 1,218 suppliers, all Australian companies.

Among the projects recently launched is a railway line worth AU$10 billion (US$7.3 billion) that will connect Melbourne to Brisbane. Nearing the launch phase is a new hydroelectric plant in Tasmania. Also on the list is the expansion of the Olympic Dam, one of the historic dams still in operation in the South of the country.

These are just some of the major works that will help change the face of Australia, and give a boost to its economy at the same time. According to the Infrastructure Sustainability Council of Australia (ISCA), for every AU$1 (US$0.70) invested in infrastructure projects that meet the social and environmental needs of the country, up to AU$2.4 (AU$1.7) of wealth is produced.

This is precisely why the federal government is investing today.

Water: the Covid-19 crisis and the future of “blue gold”