South Africa is investing $133 billion (€110 billion) in infrastructure to help rebuild its economy.

From Pretoria to Johannesburg, South Africa is searching for a way out of the economic crisis brought on by Covid-19. As the most developed country on the continent, South Africa is rich in raw materials, having undergone a years-long economic transformation that birthed a robust middle class. Investment in infrastructure appears to be key to reigniting national production.

To that end, the South African government is making an unprecedented effort to revive construction of large-scale works across the country. It will invest $133 billion (€110 billion) in this sector over the next ten years. Officials expect this investment to create 1.8 million jobs and to restart the South Africa economy post-pandemic.

South Africa President Cyril Ramaphosa made the announcement himself. Most notably, the plan offers an immediate response to the 8% contraction in GDP recorded in 2020.

In his presentation of the plan, Ramaphosa emphasized the need for “sustainable recovery,” highlighting how a significant portion of planned funds will be allocated to infrastructure works that prioritise environmental protection, from rail transport to modern energy production plants. 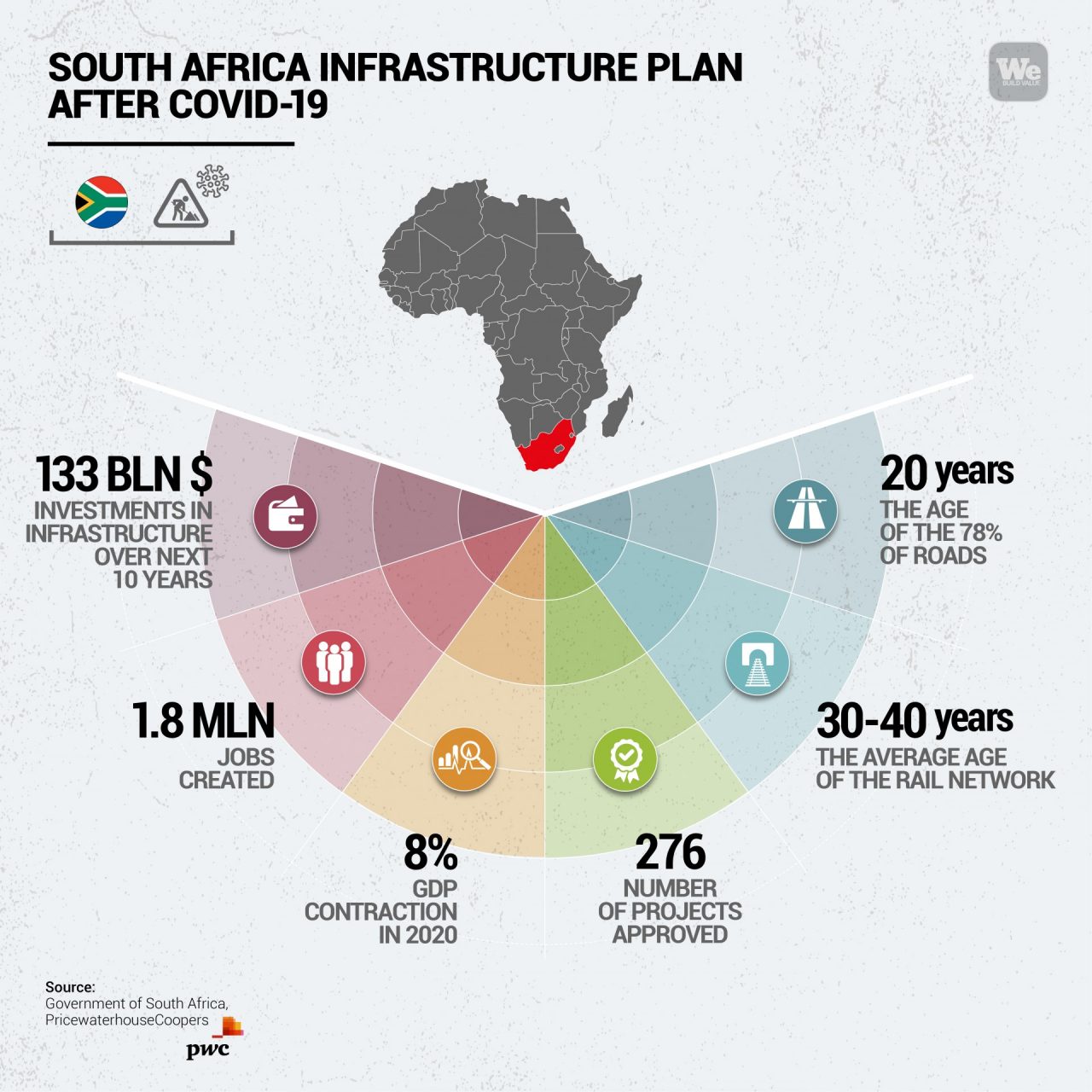 South Africa’s ten-year plan is comprised of 276 projects, ranging in scope from energy, transport, and water systems to new housing.

The project will make its most significant impact in the transport and energy sectors. A total of 294 billion South African rand (€16.2 billion) will be invested in the former sector, creating 298,000 jobs, while energy will see 270 billion rand (€14.9 billion) invested and 260,000 jobs created.

Last November, Ramaphosa clarified that the first $62 billion (€51.5 billion) will be spent within the next four years, directly countering the devastating economic effects of the pandemic.

The initiative accelerates the National Development Plan already under way, a long-term project scheduled to end in 2030. Amid the Covid-19 crisis, that plan — which was heavily based on infrastructure spending — has taken on heightened importance for the government. Its goal is now twofold: re-energising the country’s economy and modernising its infrastructure.

Railways and trains: the South African road to sustainability

According to a report by PricewaterhouseCoopers, the South African rail network makes up 80% of the African continent’s railway infrastructure. It is currently the 14th longest network in the world.

Millions of people travel by train every day, not only commuting to major South African metropolitan hubs, but also crossing over into other countries of Sub-Saharan Africa, including Namibia, Botswana, Mozambique, and Zimbabwe.

In addition, South Africa can claim the continent’s sole high-speed line, which was inaugurated just before the start of the 2010 World Cup. Known as the Gautrain, the line connects Johannesburg and Pretoria with OR Tambo International Airport and can transport an average of 40,000 people per day.

Despite its extensiveness, the network has suffered for years from inadequate investment. The rail fleets are between 30 and 40 years old, on average, with a maximum ‘lifespan’ of 46 years, and some 51% of the operating trains should be retired.

Railways and roads are the cornerstones of South African transport. Beyond rail mobility, the country has always invested in its road development, and has the most extensive network on the continent as a result. It is efficient and largely modern, and 89% of goods are transported by road.

Like the rail network, the roads are in need of maintenance and development in response to population growth and national economic ambitions. According to PricewaterhouseCoopers, 78% of South African roads are over 20 years old and require maintenance work.

Development plans suggest that the road system will remain an asset, while the government simultaneously works on a slow but steady transformation of the transport network to favor more sustainable forms of mobility than high-polluting road transport (i.e. rail and metro lines).

Infrastructures and logistics to reinvigorate the country

Africa’s largest economy is grappling with its greatest crisis in decades. The government is determined that this cannot thwart the recent growth that propelled South Africa into the “BRICS” economic bloc, an acronym placing the country among the world’s top five developing nations—Brazil, Russia, India, and China being the others.

Investments in transport and, more broadly, in trade and logistics hubs will be fundamental to sustain the South Africa’s economic growth. Exports and imports respectively account for 29% and 30% of South African GDP, confirming how economically crucial trade is with foreign countries, especially those on the same continent.

In addition, infrastructure is fundamental in supporting foreign sales of South Africa’s rich supply of raw materials. Indeed, the country is the leading producer and exporter of gold, chrome and platinum. Ninety percent of platinum extracted worldwide comes from South Africa.

Today, most goods enter and exit through the country’s eight main ports, anchored by the port of Durban, the principal African port and one of the largest in the Southern Hemisphere. The port of Durban is the centerpiece of an ambitious expansion program, The Durban Dig-Out Port Project, that will acquire 800 hectares of land to enlarge its docks. Divided in phases, the project is expected to be completed only in 2050.

The Scandinavian peninsula’s great leap into the future