All the essential investments to boost America’s infrastructure network

USA: governors on the hunt for infrastructure funding

From its semi-abandoned routes winding through the West to its river-spanning bridges and its railroads that revolutionized industry, the United States is taking a new look at the future of its infrastructure. New President Joe Biden and Transportation Secretary Pete Buttigieg will have their work cut out for them.

The investment package announced during the Biden campaign is currently undergoing budget analyses and political maneuvering, and will face the challenge of shaking up a $20 trillion (€16.4 trillion) economy that relies heavily on infrastructure. The United States’ development model has long revolved around roads, bridges, railways, electrical systems, and airports, but Covid-19 has brought these economic pillars to a crisis point.

The data speaks for itself: in his book “The Road Taken: The History and Future of America’s Infrastructure,” historian and engineer Henry Petroski explains that traffic congestion costs the U.S. economy $120 billion (€98.8 billion) annually. Similarly, analyses by the Council on Foreign Relations indicate that flight delays or cancellations caused by overloaded and outdated U.S. airports result in an annual loss of $35 billion (€28.8 billion).

But there is an upside: the nation’s production model means that infrastructure investments can generate economic growth. Business Roundtable, a consortium of leading U.S. companies, estimates that an infrastructural investment boost of 1% of the GDP could generate $320 billion (€263 billion) in economic growth in just one year. Additionally, an investment package of $83 billion (€68.3 billion) would create 1.7 million jobs in just three years.

Achieving these investments will be a “long road,” but the journey stems from a heightened awareness of the forces that are pushing up costs and slowing down growth in this critical historic moment for the United States and the rest of the world.

Aging infrastructure in need of investment

Since the 1960s, the United States population has more than doubled. It should be no surprise that the nation’s large-scale infrastructures, many of which were built in the immediate post-war period, can no longer adequately support the country’s needs.

The American Society of Civil Engineers (ASCE) shone a light on this problem in its most recent report (2017), which identified a $2 trillion (€1.67 trillion) infrastructural gap that must be closed by 2025. Otherwise, almost $4 trillion (€3.3 trillion) in GDP could be lost.

It’s no surprise then that the U.S. Government Accountability Office finds one in four bridges to have serious maintenance shortcomings, while the Bureau of Transportation Statistics of the Department of Transportation reports that 20% of all 2019 air travel faced delays with arrivals or departures.

Much work is also needed on the rail transport front. Amtrak, the United States’ main passenger rail operator, has announced the need for $30 billion (€24.7 billion) in investment purely for overdue maintenance of transport infrastructure. The same holds true for water resource management, namely drinking water, wastewater, and irrigation systems. According to the Environmental Protection Agency, a $632 billion (€520.7 billion) investment will be needed in these areas over the next ten years.

American infrastructure needs help. The call is becoming more urgent as the nation lags behind other global economies that have, up until now, assigned more strategic weight to large-scale works. 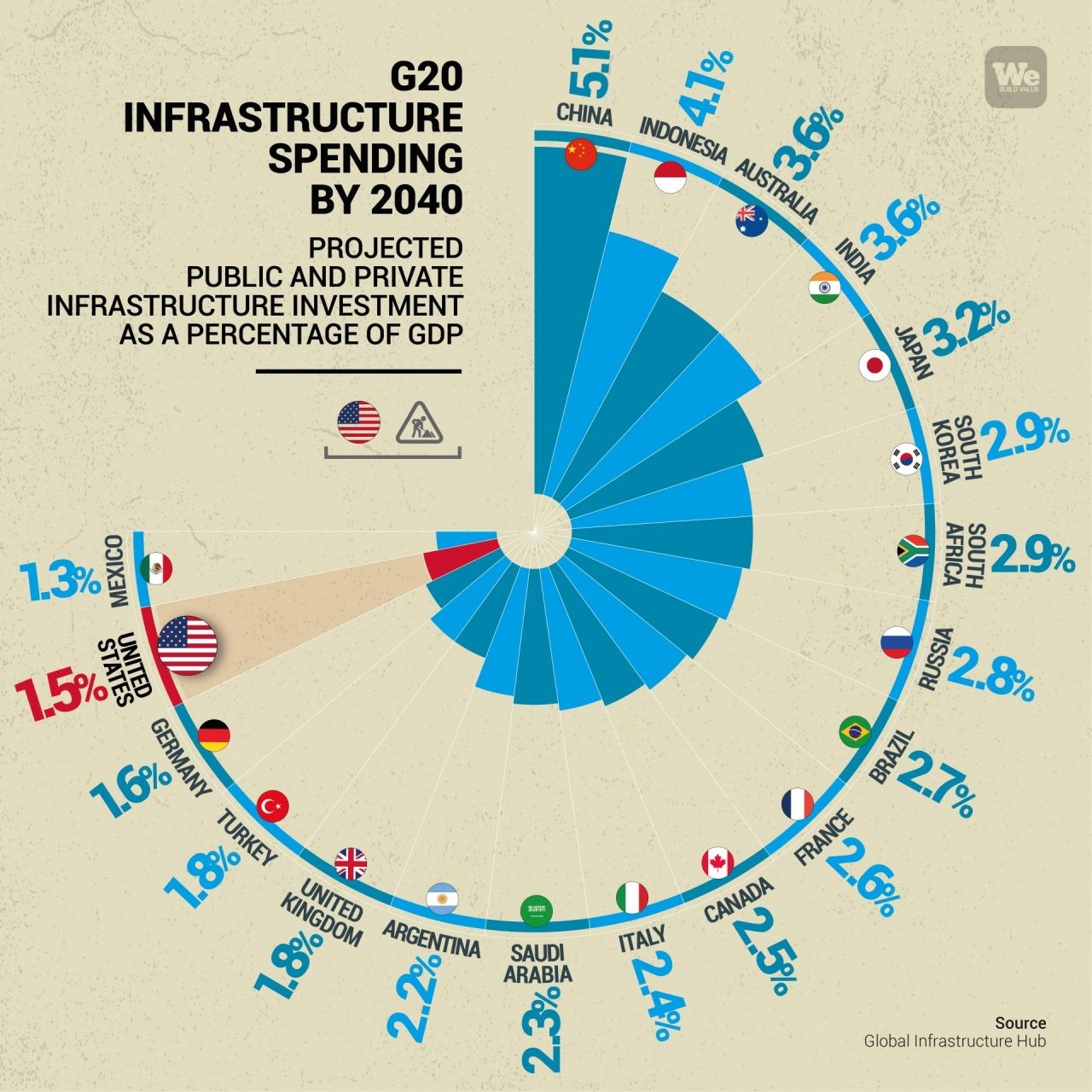 The United States may be the world’s richest economy, but its infrastructure investment numbers and data paint a bleak picture when compared to those of other countries–until now, at least.

According to a report by the Council on Foreign Relations, forecasts for infrastructural spending relative to GDP between 2016 and 2040 reveal this as an area where the United States is stagnating. Against the global frontrunner, China, which boasts roughly 8% of GDP allocated to large-scale works, the US ranks 18th, ahead of Mexico and behind Turkey, Brazil, Russia, South Korea, Indonesia and others. This is not an absolute figure, but a percentage of GDP that clearly indicates what importance has been assigned to infrastructure modernisation to date.

Some ambitious U.S. projects are underway, including the first high-speed rail line that Webuild will construct between Dallas and Houston (Texas). On their own, though, they won’t pick up the overall pace. This is why the Biden administration’s infrastructure package is so critical. It should take shape in the coming weeks, and will perhaps provide the most effective and immediate solution to the economic and employment crisis brought on by Covid-19.

Boosting infrastructure in the aftermath of Covid-19

Like many other countries around the world, the United States has been wondering for months what impact infrastructure investments could have on the economy. The Council on Foreign Relations report calculated that since March, when the pandemic took hold of the United States, Congress approved three separate plans for a total investment of $2 trillion (€1.67 trillion). Last July, for example, the Democrats’ $1.5 trillion (€1.23 trillion) plan passed in the House, which would entail new federal investments in roads, railways, broadband, and schools. Trump also spoke of an additional $2 trillion (€1.67 trillion) infrastructure stimulus package as the fourth Covid-19 response measure.

The inauguration of the new president puts the onus and honor of navigating this crisis in Biden’s hands, and of his administration. The aim is to revitalise American infrastructure repeating the success after World War II, when the nation used large-scale works as a means of establishing itself as a leader in the global economic landscape.