Dams, aqueducts and electricity networks risk being damaged by the uncontrolled fires 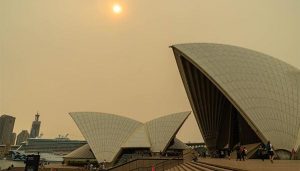 Australia’s uncontrolled wildfires have reached the outer suburbs of the country’s largest city Sydney in recent days, raising concerns about the safety of water infrastructure serving the inhabitants of New South Wales.
Helped by summer temperatures reaching 40° Celsius (104° Fahrenheit) in the days after Christmas, the brushfires have neared the Warragamba Dam, the massive infrastructure that supplies water for 80% of Sydney’s population of 5 million. In addition to devastating houses, crops, livestock and threatening thousands of human lives, the wildfires could also affect the daily lives of millions of people if water infrastructure is compromised.
This dramatic situation impacts not only New South Wales, of which Sydney is the capital, but Australia as a whole. That’s why the government has allocated $1.4 billion (AUD2 billion) in a new National Brushfire Recovery Fund to respond to the emergency with cash payments for rebuilding for families, employers and local councils.

New South Wales is certainly one of the states most affected by Australia’s wildfire emergency. Even as firefighters work to stop the advance of the flames, the country is taking stock of the damage. To date, at least 25 people have died in the fires, 19 of which are in New South Wales. The state has suffered 136 fires, 69 of which are still burning. The Kangaroo Valley, a large forest south of Sydney which has always been an ideal place for camping and outdoor sports, is now a vast area of smoke and ash.
But Sydney is not the only city affected. Although it is over 100 kilometres (62 miles) away, Melbourne has been covered in gray fog due made up of ashes floating in the air. What will happen in the coming days is uncertain. Authorities and firefighters decline to make predictions about how long it will take to put out the fires. The only thing for certain is that the cost will be very high.
«The fires are still burning. And they’ll be burning for months to come», Prime Minister Scott Morrison said at a press conference January 6. «And so that’s why I outlined today that this is an initial, an additional, investment of $2 billion. If more is needed and the cost is higher, then more will be provided».

The government funds will be used partly to manage the emergency with firefighting efforts, and partly will be used to rebuild what has been destroyed. Many infrastructures, especially the road network, has suffered extensive damage.
Not even the island of Tasmania south of Australia has been spared from fires. Tasmania is known as “the battery of the nation” because of its ability to produce clean electricity from its many dams and hydroelectric plants.

In recent days, public water authority WaterNSW said it is protecting water supplies due to concerns about the safety of New South Wales’ water infrastructure. Some drinking water treatment facilities in the state have already been damaged.
«In recent days up to the cool change, the fires had been a potential threat to supply and assets, particularly in Warragamba and in the Blue Mountains», a spokesman for the state’s water authority, WaterNSW, told Reuters. «With the coming very hot conditions the fire situation may escalate in both those fronts and possibly elsewhere».
In fact, not only the state’s dams are exposed to risk. Pumping stations, the electrical systems and the aqueducts that serve Sydney are also being protected by authorities. The Warragamba dam, for example, is located 65 kilometres (40 miles) from the city, and today — due to the prolonged drought that has hit Eastern Australia for at least three years — is working at a capacity of just 44.8 %. It has not yet suffered damage.
In addition to Warragamba, the state has over 40 dams that collect and manage water that is sent to purification plants that make it drinkable for Sydney and other cities in the state.
In addition to the direct risk of fires reaching these vital infrastructures, some people have raised concerns about the potential danger of dust and ash contaminating the reservoirs, also due to the possible rains expected for the next few days. This would dramatically affect the quality of the water. However, WaterNSW has confirmed in the last few hours that all the necessary measures have been taken to protect the water and that currently no risks are foreseen.

About the US water crisis: two million people with no running water

“Construction Megacities”: infrastructure projects that will change the face of the world’s cities