Beijing’s national stadium gets ready for the 2022 Olympics

Behind the scenes of the Bird’s Nest, Beijing’s famous National Stadium

A report sees more than $150 billion of projects in pipeline

The stadiums of the future

Anyone who attended the inauguration of Beijing’s National Stadium at the 2008 Olympic Games can recall its imposing structure, never-before-seen shape, and modern amenities. Known around the world as the “Bird’s Nest”, the stadium is a feat of engineering with a record-setting status that speaks for itself. It’s the largest steel structure ever built and one of the most complex stadiums ever completed, engineering-wise. But those are just the most obvious parts of the infrastructure, which hosts events in entertainment, sport, and culture, and was designed specifically to fit seamlessly into the Beijing landscape.

The stadium is located along Beijing’s North-South axis, which divides the city in two; it also includes the Forbidden City, Tiananmen Square, the Temple of Heaven and the wider Olympic Green, which is about 5 miles from the center.

The national stadium was designed as a symbol of Chinese greatness for the 2008 Olympics. Now it is gearing up to play that role a second time at the Winter Olympics in 2022, when the Bird’s Nest will host the opening and closing ceremonies of the Games.

If the Chinese authorities’ plan is carried out successfully, the “Bird’s Nest” will conquer a new record as the world’s only stadium to host the opening ceremonies of both the summer and winter games.

Beijing’s stadium took five years of work, its construction site first opening on December 24, 2003. Initial preparations were put in place along with the pile foundations, which had to be dug 36 metres (121 feet) below the surface to support the weight of the building.

Once the pile foundations were set up, the stadium’s internal structure—comprising 14,700 precast concrete slabs—was the first part completed. Twenty four supporting columns, each weighing 1,000 tons, were also part of this phase.

Massive columns were also needed to support the stadium roof, which weighs 11,200 tons. The steel netting that gives the stadium its shape was then built around the central section. This was a particularly complex construction phase, tipping the project’s final cost to $423 million in March 2008, when construction work ended. 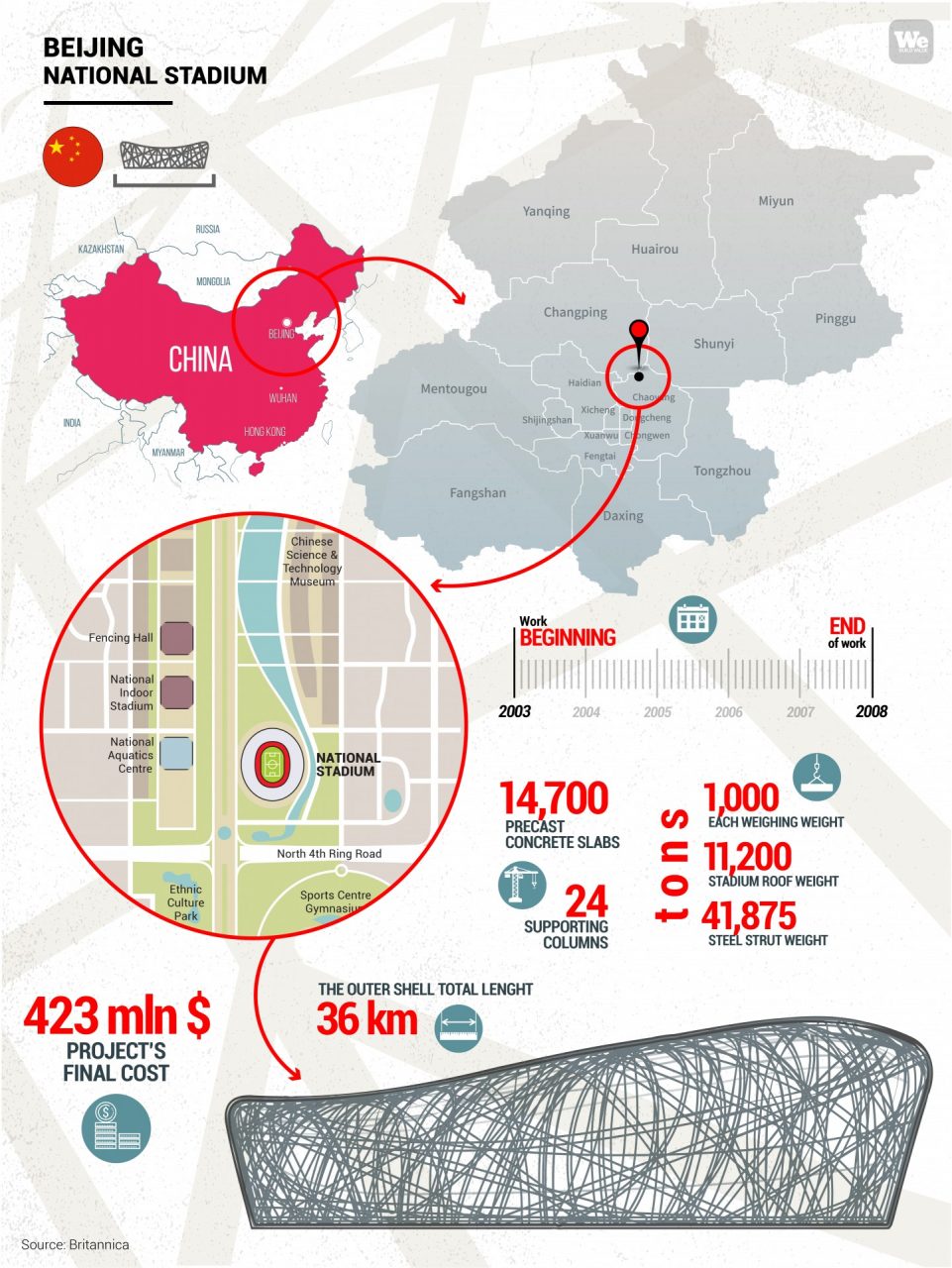 Structure and design of the “Bird’s Nest”

Behind this stadium’s futuristic design and complex structure was a twofold mission: it needed to be earthquake-proof, yet appear visually “light”.

Swiss firm Herzog & de Meuron ran the project, assisted by Chinese architect Li Xinggang. From the outset, steel—a dramatic amount of it—served as the base material. Totaling 41,875 tons, the steel used was said to be the purest ever produced in China. By the time work was complete, the outer shell encompassed 36 kilometres ( 22 miles) of interwoven steel struts, creating the unmistakable shape of a bird’s nest.

The entire Beijing’s stadium structure was then covered with a waterproof polymer membrane, allowing sunlight to pass through to the inner turf. The membrane also helps enhance stadium illumination, significantly reducing light reflections and shadows and creating an atmosphere suited to entertainment.

Giving spectators the best possible auditory experience was key in determining the materials and shape. Because the materials are phono-absorbent, the audience can hear sounds from all over the playing field at every point in the stands.

The stadium’s 80,000 seats—down from 91,000 after the removal of those temporarily installed for the 2008 Olympics—have made it one of China’s most popular attractions. The Bird’s Nest’s capacity, structural characteristics, and prime location have all helped it survive well beyond the event that birthed it.

Since the opening ceremony of the Olympics on August 8, 2008, the stadium has continued to host national and international events, matches and festivals.

Currently, in addition to being a tourist attraction, it is considered China’s most important public space. Each year the stadium hosts more than 60 events, from sporting matches to more artistic entertainment, such as concerts.

Also among these events is the Bird’s Nest Ice and Snow Festival, a theme park-like spectacle held each year, complete with ski slopes, ice hockey and snowboarding. Covid-19 has of course put all this activity on hold, but the National Stadium is expected to start welcoming thousands in for entertainment and good times again soon.

The next international appointment on the stadium’s calendar is February 4, 2022. Provided that the pandemic is defeated by then, and the public able to return to sporting events, the Chinese Winter Olympic Games will open that day.

For the occasion, China has already announced that the opening ceremony will be held inside the Bird’s Nest, and confirmed that investments in this edition of the Games will be lower than in 2008. The Chinese government spent $43 billion in the latter edition, while for the 2022 Winter Olympics the approximate total is $3.9 billion.

This decrease in costs is in large part due to the reuse of the infrastructures built for the 2008 edition, beginning with the Beijing’s National Stadium. The “Bird’s Nest” remains an ideal stage for global events a decade-plus after its inauguration.