The 1,000 projects that can get Europe going again

From energy to transport, 1,000 projects can help Europe’s economy recover from the Covid-19 pandemic

Eastern Europe must chose infrastructure investment to fight the crisis

One thousand “green” projects to get Europe back to work, to rebuild the economy of an entire continent damaged by the Covid-19 crisis. Innovative and sustainable projects in the strategic infrastructure sectors, from transport to energy.

To carry them out will require public and private investment of €200 billion, some of which can come from the European Union through the resources of the Recovery Fund, ensuring an almost immediate impact both in terms of reducing pollution and creating new jobs.

These 1,000 projects would create 2.8 million new jobs in the 27 EU countries (a quarter of the total number of jobs lost due to the Covid-19 crisis). This would be an important opportunity for a continent that is still looking for a way to recover from a health crisis that has also caused great economic damage.

Consultancy EY points the way with the study “A Green Covid-19 Recovery and Resilience Plan for Europe,” based on conversations with institutions like the European Investment Bank and the European Construction Industry Federation, as well as on a representative sample of the 30 most important private players. 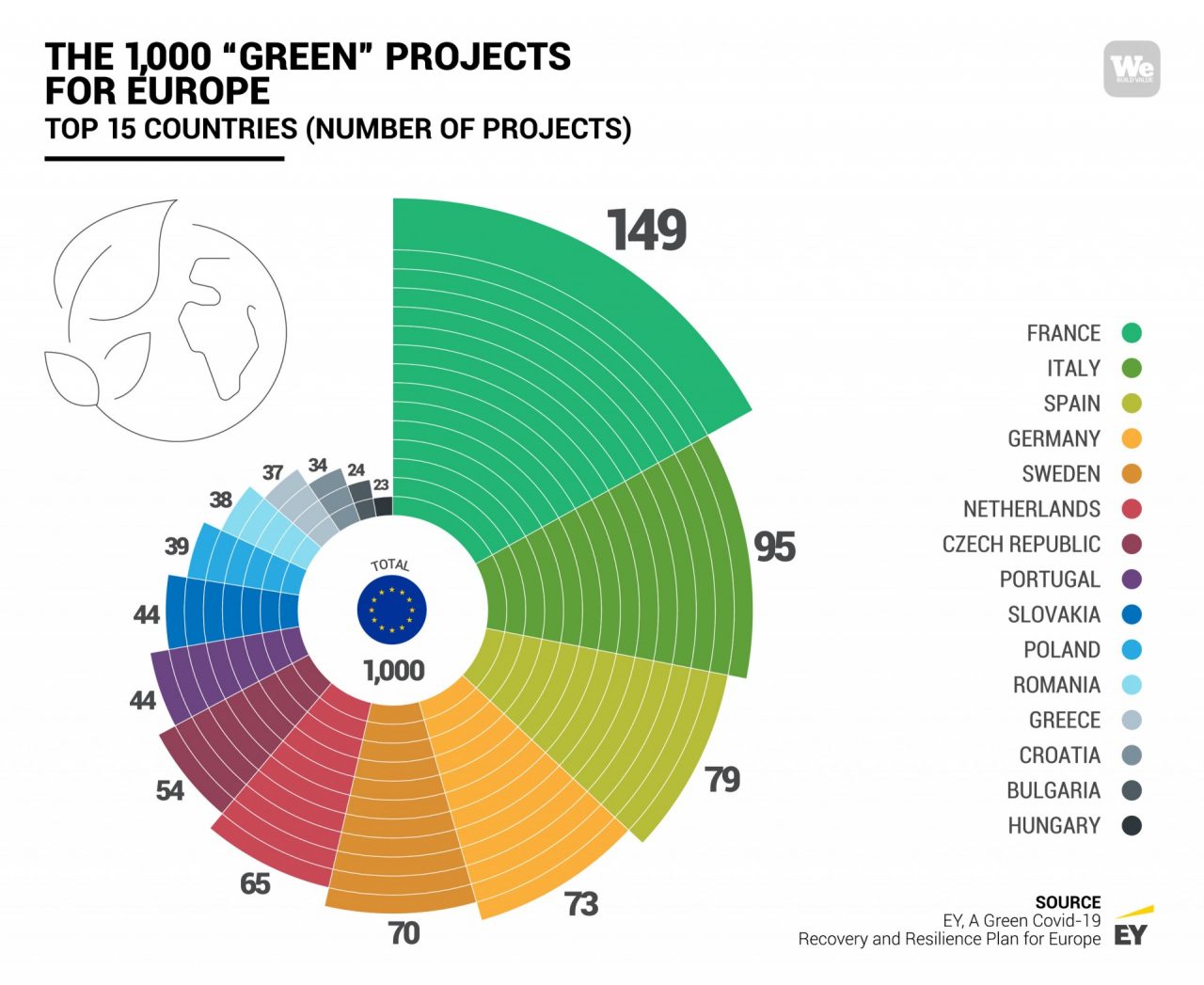 European infastructures: a helping hand for the Recovery Fund

The dialogue between Europe’s institutions and national governments is almost entirely focused on the list of projects being submitted by member states to access the Recovery Fund’s resources.

The European Union faces a huge challenge in carefully selecting the right projects, identifying those that can have an economic impact but also for an ability to modernise a nation’s economy. In this sense, EY’s study looks at five sectors it considers strategic for the continent’s future: energy, buildings, transport, industry and land use.

To date, according to the study, the biggest obstacle for 49% of the 1,000 projects selected by EY is not financial but comes from regulatory, administrative and commercial hurdles. Member states’ regulations and bureaucratic delays are the biggest brake that risks keeping the projects from leaving the starting gate.

On the contrary, quickly launching the 1,000 selected projects would give an immediate boost to economic recovery. According to EY, €75 billion of the €200 billion is needed for the energy sector, which has 374 projects ready to be developed in the coming years. Even more (€87 billion) is needed for the transport sector’s 217 projects essential to support sustainable mobility, both between countries on the continent and within cities. To make buildings greener and energy efficient, the study indicates 125 projects for a total of €13 billion; €19 billion could be invested in 201 projects for industry; and €5 billion on 85 land use projects.

Energy and transport therefore remain the key sectors in which to invest, both in terms of a rapid reduction of harmful gas emissions but also for job creation. 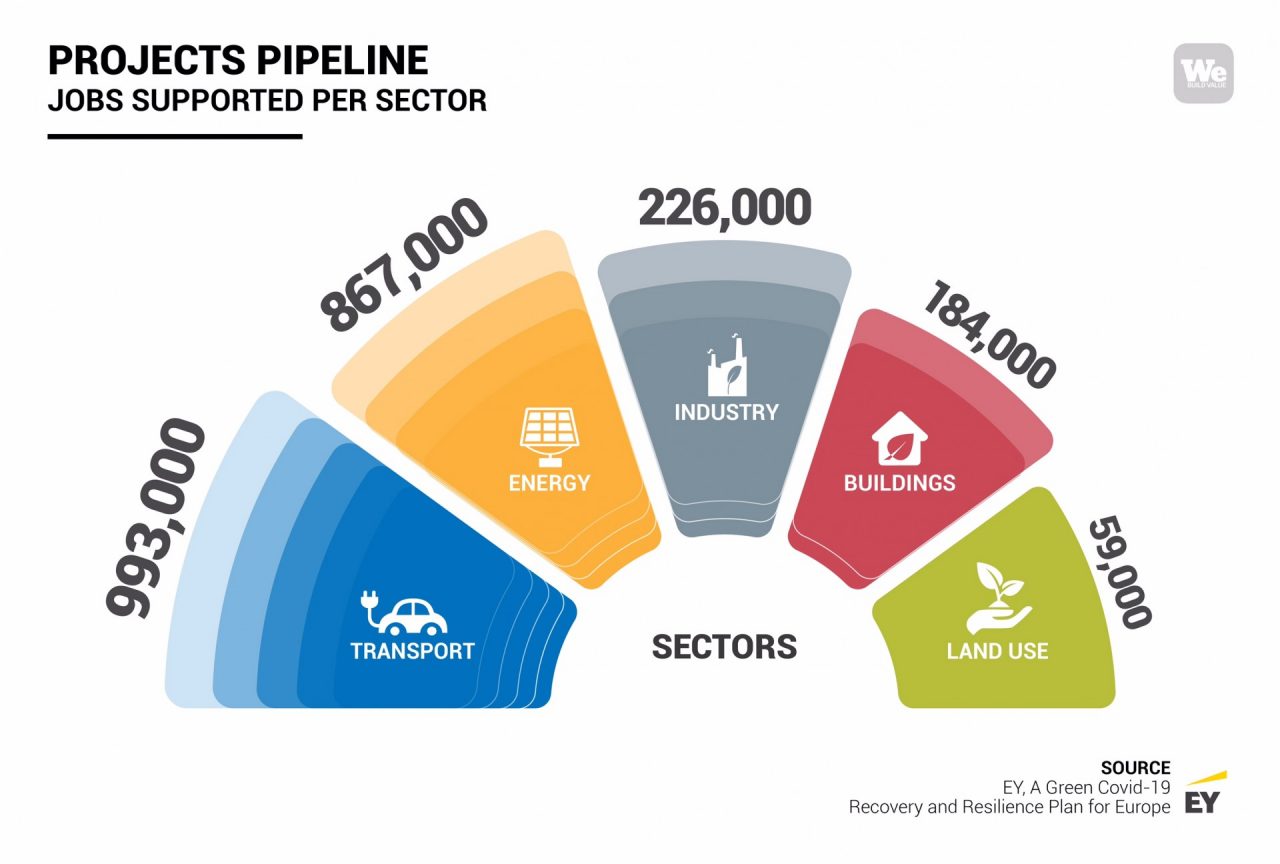 The 1,000 projects to get Europe working again are spread more or less evenly among the EU’s 27 member states, but led by countries that most need to relaunch their infrastructure. It is no coincidence that the top four countries by number of projects are France (149), Italy (95), Spain (79), Germany (73) and Sweden (70). Together, these five countries count 466 projects, almost half of the total.

The study points to a clear need to focus on major projects, from subways to fast trains, from clean energy to green buildings. More generally, the entire continent seems to need a long-term vision for infrastructure works to be built immediately. Sustainable mobility projects can play a key role, such as line 5 of the Munich metro (a €700 million project); or the city of Milan’s electric bus plan, which is worth €1.5 billion.

The future of Europe hinges on these projects and many others like them. This future is marked not only by economic recovery and creating new jobs, but also by a modernising a vision for future growth that depends on sustainability and progress.

Austin, the maxi-plan that will modernise Texas

Guangzhou Opera House: the story of the theater on the river