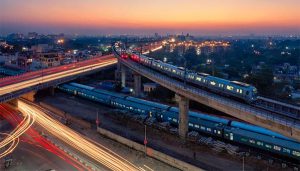 India wants to become a $5 trillion economy, and thus rival China and Japan for the leadership of the Asian continent. Prime Minister Narendra Modi’s plan to reach this goal relies heavily on infrastructure investments.

Finance Minister Nirmala Sitharaman announced her plans at the start of the year to launch $1.5 trillion in infrastructure spending over the next five years.
This huge sum makes this plan one of the world’s most ambitious construction projects. This spending comes on top of the $1.1 trillion invested in construction in the past decade (particularly between 2008 and 2017). But these past investments were still not enough.

Private investors will provide 22-25% of the new funds — at least according to government plans – and the remaining part will come from federal and state resources.
The plan aims to develop traditional infrastructures: roads, railway connections, water and electrical systems. A panel of experts has been working since August to identify the most urgent projects to place at the top of the list, while the government is looking for foreign banks willing to support these projects.

Asia’s third-largest economy wants to play a more prominent role on the international economic chessboard. It is pursuing this goal through investments and carving out a leading position in the debate between the major powers on economic issues. It is no coincidence that last July Prime Minister Modi – who attended Davos for the first time in 2019 — announced the intention to create an “Asian Davos,” a World Economic Forum to be organized in India, which could compete with China’s annual Boao Forum for Asia.

This idea is closely linked with the maxi infrastructure investment plan because the Indian Forum is seen by the government as an ideal platform for attracting large international investors and helping them get involved in India’s development projects.
Finance Minister Nirmala Sitharaman said in July: «It is high time India not only gets integrated into the global value chain of production of goods and services, but also becomes part of the global financial system to mobilize global savings, mostly institutionalized in pension, insurance and sovereign wealth funds».
For its part, the country has set up the National Investment & Infrastructure Fund, created to attract investments for the construction of roads, ports, railways and electrical systems. A useful tool which is not enough on its own, however, to support India’s ambitious maxi infrastructure plan.

Infrastructure investment in India to relaunch the economy

The Indian government has launched the infrastructure plan and is seeking more visibility in the international arena to support economic growth, which started to slow in 2019. In the third quarter of last year, growth fell to 4.5%, the lowest figure in the last six years. In 2018. India’s GDP rose 6.8%, whereas the Bank of India sees GDP growth of 5% in 2019. Too little to support the government’s ambition to keep pace with China and above all to reach the levels of well-being and development of a country like Japan.
India is still lagging behind in achieving its goals, but hopes that a push forward can come from new infrastructure spending.

While the government works to approve the $1.5 trillion plan and looks for international investors, routine infrastructure investments also calls for massive projects in the coming months. In fact, joint investments by the private sector, the central government and state governments will amount to $272 billion between 2020 and 2021, according to the government — an increase of 30% compared to the 2019-2020 budget.

These already-planned investments are outlined in the National Infrastructure Pipeline (NIP) published by the Indian government in December.
The ongoing activities include the privatization of a series of airport terminals to raise funds to invest in new projects, and structural interventions on roads and railways. The maxi highway that will connect Mumbai to Nagpur is on this list and is under construction. On the rail front, the government’s monopoly is being ended and private investors will be soon be able to bid to run 150 railway lines.
These projects will improve India’s transport networks and help boost economic growth.