The United States and its water challenge

The U.S. is facing a potential water emergency: the Senate is working to approve the America’s Water Infrastructure Act

Water is a precious commodity. The infrastructure to safeguard it, keep it clean and drinkable, transport it and transform it into energy is indispensable. To address the need to modernise or replace existing water systems in the United States, the Senate Committee on Environment and Public Works (EPW) has just passed the America’s Water Infrastructure Act of 2020 (AWIA) bill, which is expected to be voted into law by Congress before the end of the year.

This program earmarks $17 billion in federal funds to assist with the deepening of ports, and address concerns related to inland waterways and floodwaters across the country. Some states, such as Texas, have already had their spending plans authorized in the bill.  AWIA, for the first time, introduces new mechanisms to cut bureaucratic red tape.

The legislative programme also includes refunding for the 2014 Water Infrastructure Finance and Innovation Act (WIFIA), a federal loan and guarantee program that aims to accelerate investment in the nation’s water infrastructure by providing long-term, low-cost supplemental loans for regionally and nationally significant projects.

In 2019 it received $50 million in new funding each year until 2024, plus $5 million for new loans to state infrastructure financing authorities, with the aim of improving water and wastewater infrastructure. Moreover, another $2.5 billion in new funds will be spent to support the Drinking Water Infrastructure Act of 2020, amending and improving the 1974 the Safe Drinking Water Act to enable certain communities to cope with the lack of drinking water. 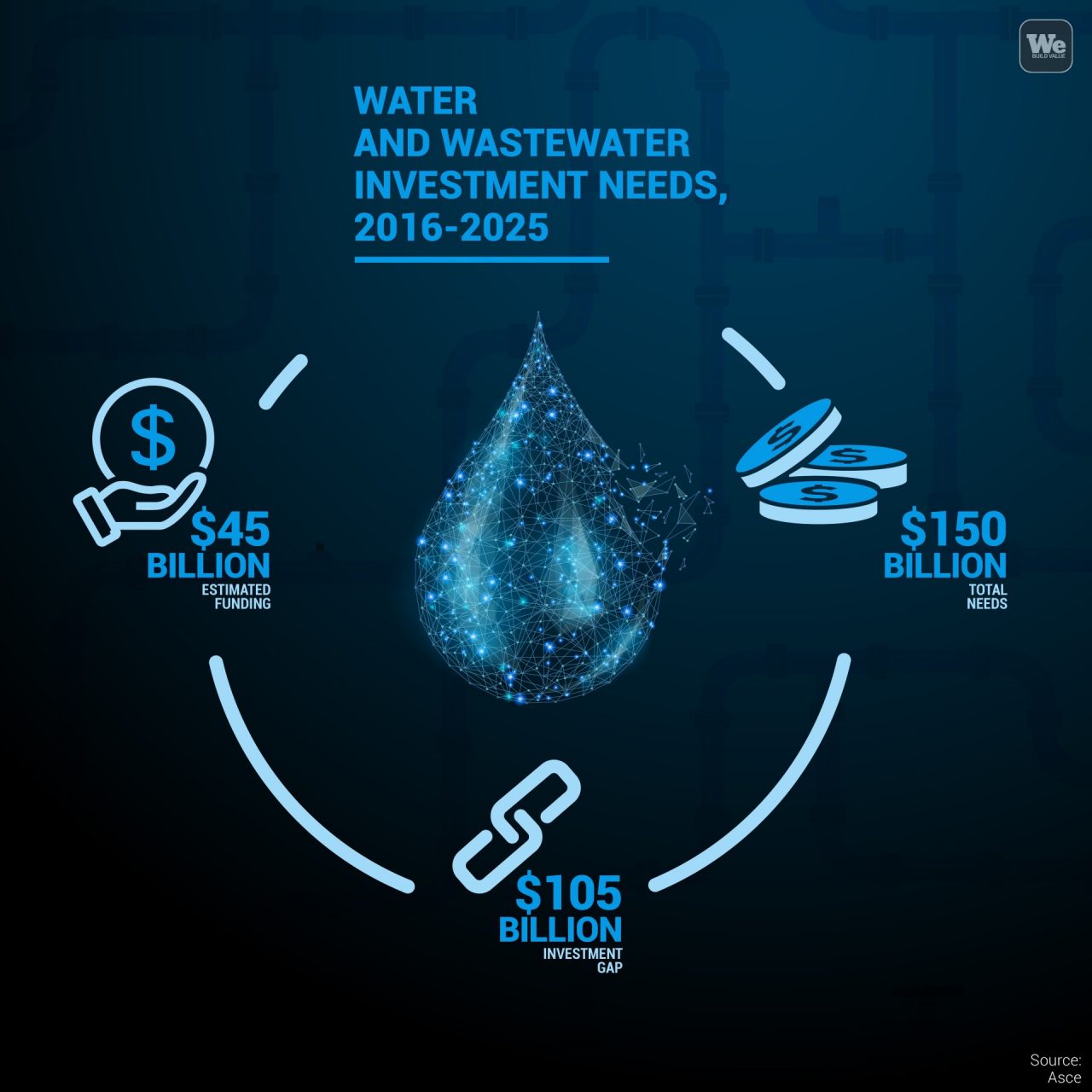 Water: a national issue for the United States of America

The statistics on water and infrastructure needs in the United States point to a state of emergency, according to the American Society of Civil Engineers (ASCE), which in its latest report gave the U.S. a “D” grade for drinking water on a scale from A to F. A “D” grade means “the infrastructure is in poor to fair standard, and mostly below standard, with many elements approaching the end of their service life. A large part of the facilities show significant deterioration. Conditions and capacities raise serious concerns with a high risk of failure.”

According to ASCE data and comments, the United States uses 42 billion liters of water per day to support daily life in homes, factories and offices across the country. About 80% of drinking water in the United States comes from surface waters such as rivers, lakes, reservoirs and oceans, with the remaining 20% coming from groundwater. In total, there are about 155,000 active public drinking water systems throughout the country.

Most Americans – just under 300 million people out of a total of 330 million – receive their drinking water from one of the nation’s 51,356 community water systems. Drinking water is delivered through one million miles of pipelines across the country. Many of these pipes were laid in the first half of the 20th century with a plant life of 75-100 years. 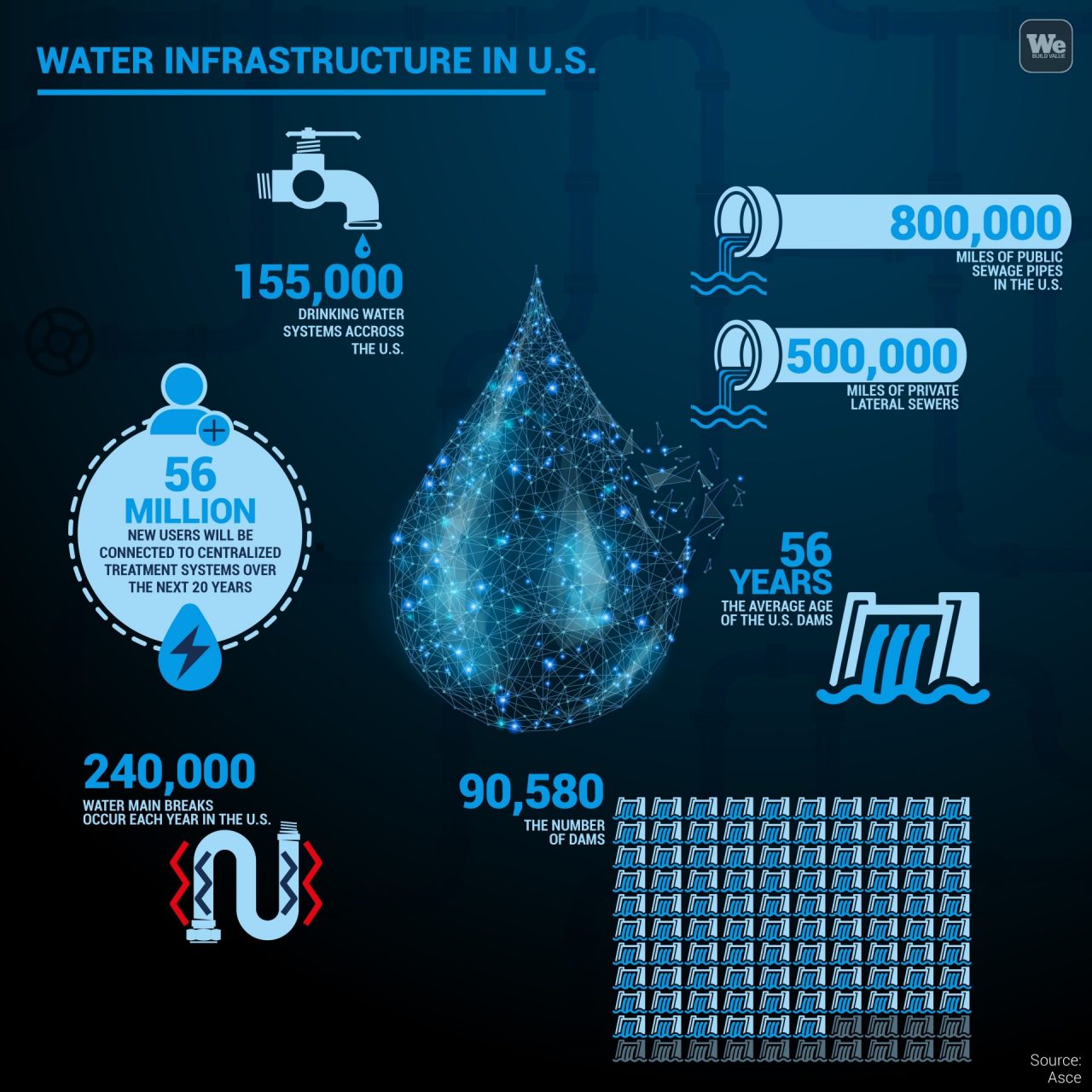 The race for federal funds

The loans will help make improvements as the U.S. economy recovers from Coronavirus, wrote Fitch Ratings in a report commenting on the impact of WIFIA. Accessing these government-backed loans will not, however, be an easy cure-all for all states, because the economic slump could put downward pressure on rates.

According to Fitch, which maintains credit ratings on 400 long-term public issues by municipal water companies, “Utilities in areas that have been harder hit by the pandemic and the economic fallout, or those areas where cost increases have been implemented in recent years, may not be able to easily adjust rates by passing costs on to consumers,” it wrote in a report.

The American administration is examining various expenditure forecasts for the investment to make the American infrastructure landscape better prepared for the future. The ASCE estimates the gap between needs and funds spent up to 2016 at $105 billion. The Environmental Protection Agency (EPA) sees the necessary investment in water services at an estimated $472 billion over 20 years, while the Clean Watersheds Needs Survey (CWNS) in 2012 estimated that wastewater and stormwater infrastructure needs were $271 billion over the same period. Finally, according to the American Water Works Association, upgrading existing water systems and meeting the drinking water infrastructure needs of a growing population will require at least $1 trillion over the next 25 years.

In recent years, the Webuild Group and its U.S. subsidiary Lane Construction have intensified their activities there by carrying out several important water management engineering works. For example, Lane is building a hydraulic tunnel deep below Lake Mead necessary to quench the thirst of Las Vegas as water levels at the nation’s largest reservoir drop. The Colorado River, which feeds Lake Mead, provides drinking water to about 10% of the national population. River levels have gradually decreased due to climate change, draught and increased demand from cities and farming communities.

And like other American cities, Washington D.C. has suffered from an outdated sewer system that overflows during heavy rainfall. This untreated overflow has resulted in a toxic mix for the capital. As part of the Clean Rivers Project, which will end in 2025, Webuild has built a futuristic hydraulic tunnel under the Anacostia River, a tributary of the Potomac, which in that section allows wastewater to be conveyed separately from rainwater, thus cleaning up the city.

Webuild and Lane’s construction projects and completed works reach the far corners of the country. They include the Dugway Storage Tunnel in Ohio to reduce sewage discharges into the environment and the storage of treated water; the Kuwahee Water Treatment Plant to regulate sanitary sewage flows in the Tennessee River; the Ship Canal Water Quality Project to manage wastewater and rainwater in Seattle; the Three Rivers Protection & Overflow Reduction Tunnel to restore the rivers of Fort Wayne, Indiana;  the West Side CSO Tunnel Project to improve the water used by the people of Portland, Oregon; and the C43 Caloosahatchee project in South Florida to restore the natural water flows destroyed by residential and agricultural development of the area around the unique ecosystem known as the Everglades.

The cost to the community of obsolete infrastructure

The shortage or degradation of water management infrastructure in the United States has taken on dramatic proportions. In 2017, a crack in an emergency drain placed the Oroville Dam in California at risk of collapse. In 2014, the crisis resulting from lead poisoning from aging pipes in the city of Flint, Michigan became a national scandal.  According to the ASCE, more than 20 billion liters (6 billion gallons) of treated drinking water are lost daily due to leaking pipes, with about 240,000 water main breaks per year.

According to estimates by the ASCE, “leaky, aging pipes are wasting 14 to 18% of each day’s treated water; the amount of clean drinking water lost every day could support 15 million households.”

Across the nation’s 14,748 wastewater treatment plants, the EPA (the Environmental Protection Agency) calculates between 23,000 and 75,000 sewage overflows occur each year. The existing plants provide water to 240 million Americans, or three-quarters of the population, and by 2032, according to the EPA, at least 56 million more people will be connected to centralised sewage treatment plants.

The ACSE also gives poor marks to America’s dams. They get a “D” grade as well, because out of a total of 90,580, the average age is 56 years. The ACSE said that at least one-sixth, more than 15,500, are classified as high-risk in 2016, and need an estimated investment of $45 billion dollars. According to The Association of State Dam Safety Officials, the figure to rehabilitate the nation’s federal and non-federal dams is even higher — $64 billion. More than half of this infrastructure is owned by private entities, while the federal government owns 4%, 3,381 in all; and a further 709 are managed by the U.S. Army Corps of Engineers.

To make up for lost ground, many in the U.S. are optimistic about the America’s Water Infrastructure Act of 2020. The programme has been initially approved in a bipartisan vote. The list of projects — which includes reservoirs, water storage, wastewater treatment plants, dams, ports, flood prevention systems, irrigation routes, and navigability in rivers and lakes — is now on lawmakers’ desks.  Turning these projects into reality is the only way to prevent the water issue from soon turning into a national emergency.

The United States Senate Committee on Environment and Public Works (EPW) has just passed the America’s Water Infrastructure Act of 2020 (AWIA) bill, which is expected to be passed by Congress before the end of the year. The goal: to modernise and replace the ageing U.S. water infrastructure

Drinking water is delivered through one million miles of pipelines across the country. Many of these pipes were laid in the first half of the 20th century with a plant life of 75-100 years.

The Webuild group is involved in numerous water projects, from Washington D.C. to Las Vegas, from Seattle to Miami, that are designed to prevent water resources from being wasted.