From Salini to Webuild, twenty years of major projects

A 114-year-long history which, in the last two decades, has undergone a profound acceleration.

In the ongoing story of a large construction group with roots going back to the early part of the 20th century, the last twenty years have been the culmination of an evolutionary process transforming a family business into a publicly-listed multinational. Webuild is now a group with a total order book of €40 billion, (construction backlog €34 billion), 70,000 people employed between direct and indirect workers, and with projects completed in 110 countries. Its 114-year-long history has seen it grow in the past twenty years from Salini SpA to Salini Impregilo, and now to Webuild in 2020. This story can be  told in numbers (from Salini SpA’s €146 million in revenue in 2001 to Webuild’s €5.3 billion in 2019) but also the over 100 projects built around the world between 2000 and 2020 such as the new Panama Canal; subways in Riyadh, Doha and Copenhagen; the futuristic Stavros Niarchos cultural center in Athens; dams in Ethiopia; the new San Giorgio Bridge in Genoa; and the Gerald Desmond Bridge in Long Beach, California.

From Salini to Webuild, twenty years of major projects in Italy and in the world 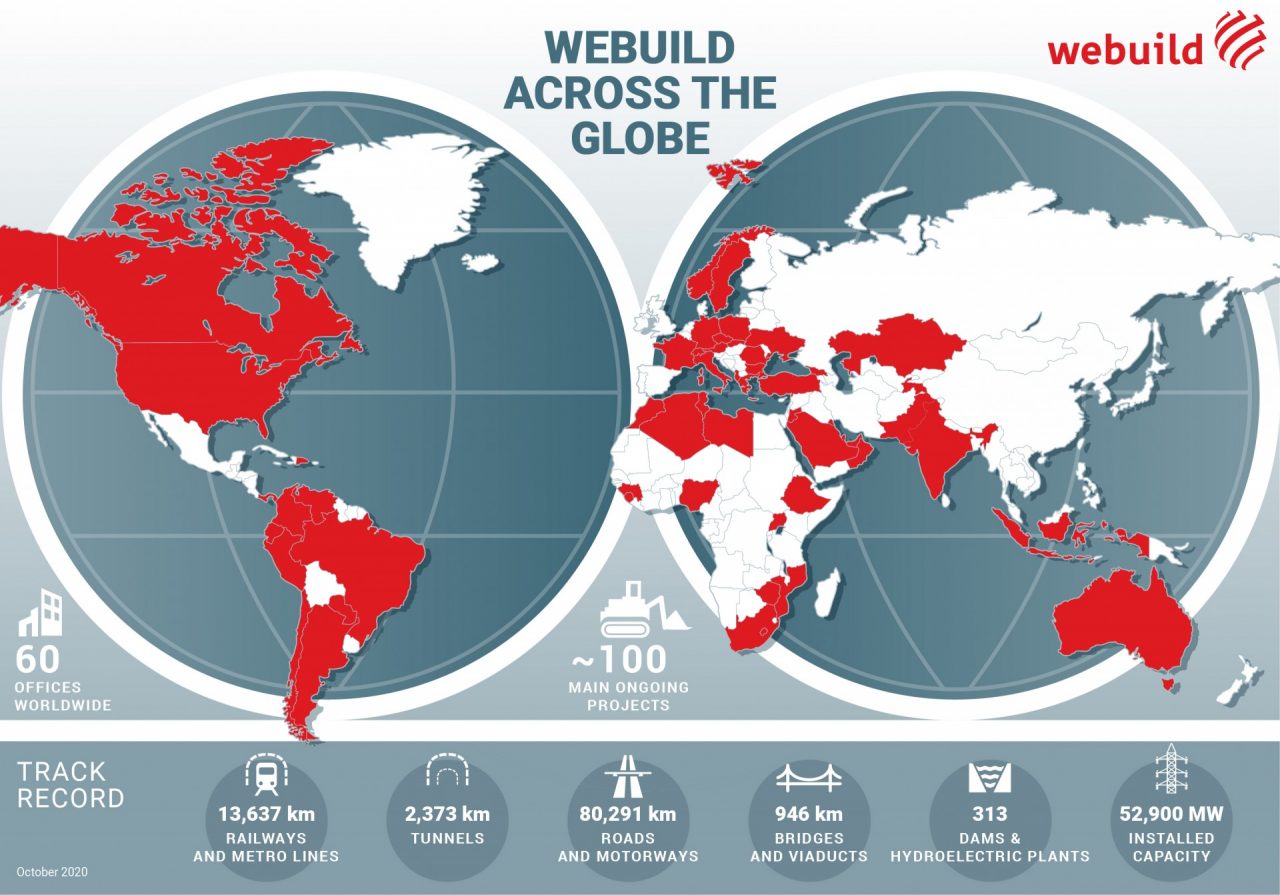 For Webuild, the year 2020 began with the completion of Progetto Italia, the merger plan launched to consolidate Italy’s construction sector. Progetto Italia began in 2018 when Salini Impregilo made an offer to acquire Astaldi (Italy’s second-largest construction company). The idea of acquiring Astaldi was actually only part of a broader plan for Salini Impregilo to become a driving force in Italy’s construction sector by consolidating the knowhow of other key players. In 2019, Salini Impreglio acquired one of Italy’s most specialised firms, Cossi Costruzioni. The Progetto Italia plan required new shareholders to invest in Salini Impregilo. State backed lender Cassa Depositi e Prestiti Group, and a pool of banks, have now reinforced the Group’s size and its ability to be more competitive on international markets. Financial solidity goes hand in hand with industrial expertise and innovation with a view to sustainability — two engines that together can continue to fuel the Group’s growth in the medium to long term. To mark this turning point, Salini Impregilo changed its name to Webuild Group on May 15, 2020. 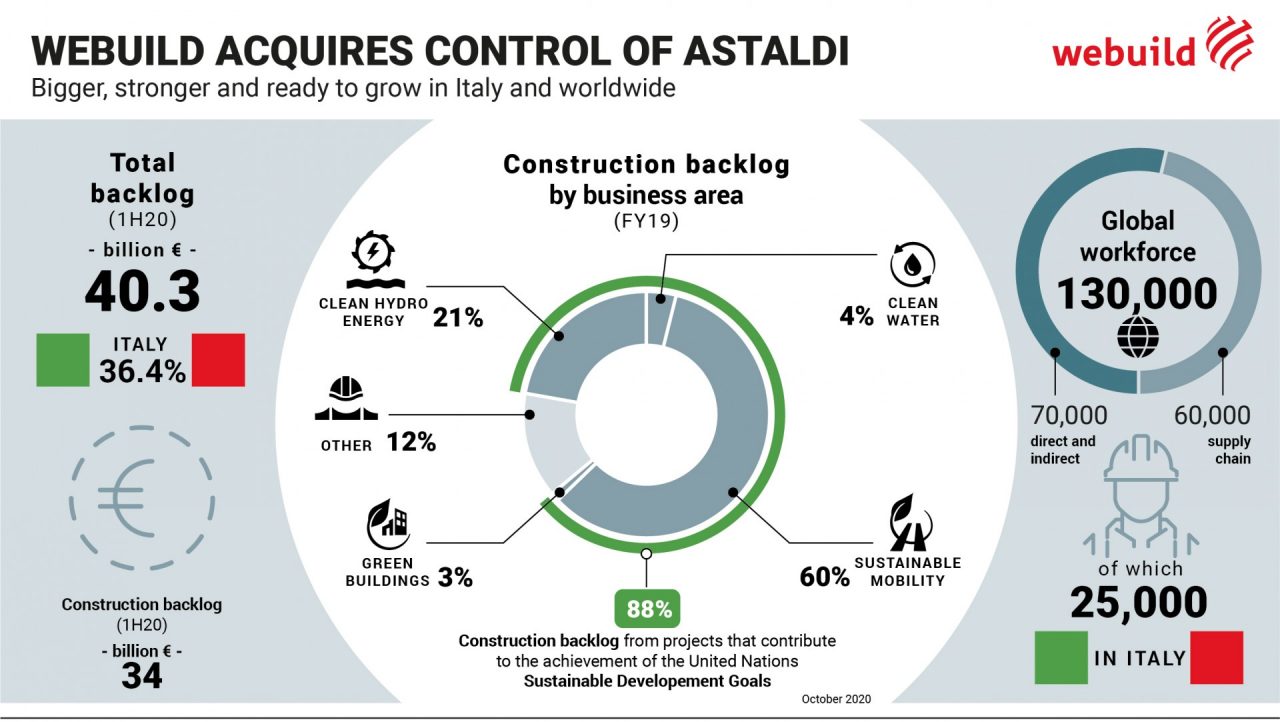 The growth through acquisitions over the last ten years has made the Group more competitive in Italy and abroad on large complex infrastructure projects, and strengthened its presence also in its domestic market — a common trait of all major construction players around the world. Today Webuild is constructing some of Italy’s most challenging infrastructure projects: the Terzo  Valico di Giovi mountain pass (on the high-speed railway that will connect Genoa to Milan in about 60 minutes); the Naples-Bari and Palermo-Catania high-speed railway lines; the Jonica highway; Milan’s new subway;  and the Brenner Base Tunnel, which will become the longest railway tunnel in Europe. These are projects that strengthen the Group’s presence on the domestic market, and rely on a chain of external experts. For Italy’s five largest construction sites, the Group is employing 5,000 suppliers and subcontractors, 98% of which come from across Italy from Sicily to Trentino Alto Adige, and many are small- and medium-sized enterprises.

Bringing Italian know-how to world markets, attention to stakeholders and shareholders, the importance of a strong work ethic, and sustainable infrastructure are all pillars of a growth strategy developed between 2010 and 2011. That’s when Salini Costruttori completed the construction of Milan’s new Palazzo della Regione Lombardia, and Salini acquired Todini Costruttori. In 2011 the company won the contract to build Cityringen, Copenhagen’s driverless and ultra-modern subway line, one of the largest sustainable mobility projects in Europe. The contract is the result of a strategy to expand in lower-risk and more-developed markets, which was soon reinforced by the acquisition of Italy’s Impregilo, one of Italy’s largest construction firms.

In September 2011, Salini Spa began building a stake in the publicly-listed Impregilo (created by the union of Girola, Lodigiani, Impresit and Cogefar) by buying shares on the stock exchange. This eventually lead to the birth of a new “national champion” in 2014, with an order book of over €30 billion. On 1 January 2014, when the merger process was completed and Salini Impregilo was born, the resulting group had a production value of over €4 billion compared to €146 million in 2001. In 2010, Salini had a standalone turnover of just over €1 billion, which in ten years multiplied fivefold, approaching €5.5 billion in 2019. The decade 2010 – 2019 saw the group complete 119 projects around the world, the backlog rising from about €10 billion to over €36 billion, and staff from about 12,000 to almost 50,000 people of over 100 nationalities; including direct and indirect employees, the group now has 70,000 employees with Astaldi.

The strategy to seek growth in lower-risk and more-developed countries led the Group to acquire Lane Construction Corporation in the United States in 2016. The purchase won the M&A Award in 2017 as the best Italian acquisition abroad. Lane is America’s leading road infrastructure player, a company present on the U.S. market for 127 years.

This twenty-year journey began in the early 2000s when Salini SpA, a company founded in the 1930s and known for its leadership in the hydroelectric sector, became the third largest infrastructure player in Italy after Impregilo and Astaldi.

In 2001, Salini SpA had a turnover of €146 million, which compared to its later size perfectly illustrates the effectiveness of its plan to grow both organically and by acquisitions.

This acceleration is the brainchild of Pietro Salini, who became chief executive officer of Salini Costruttori in 1994, and believed that Italy needed a national infrastructure “champion” to compete on international markets.

In 2009 Salini SpA acquired Todini Costruttori (another historic company in the sector founded in the 1950s), and by the end of the decade it already had a production value of €1.2 billion.

During these ten key years in the Group’s history, it carried out major projects, some completed by 2010 and others finished in subsequent years. These include the Gibe dam system (three huge hydroelectric plants built on the Omo River in Ethiopia), the Kingdom Center (the skyscraper that became the symbol of Riyadh), the Auditorium of Rome designed by architect Renzo Piano, the Great Mosque of Abu Dhabi.

These  works demonstrate, even before the evolution that led to the birth of Webuild, the technical excellence but also the vision of a Group committed to linking its name and its destiny to an idea of infrastructure based on innovation and sustainability.

Webuild Group has an order book of €40 billion, and employs 70,000 people directly and indirectly around the world

The Group’s evolution though acquisitions over the past twenty years began with Salini SpA, continued with Salini Impregilo and has culminated with Webuild

Over the past 20 years, the group has completed large infrastructure projects like the Cityringen subway, the new Panama Canal, and Genoa’s San Giorgio bridge

Twenty years of innovation and sustainability

Sustainability has become a pillar of the Group’s long-term growth strategy, as demonstrated by the record result achieved in 2019, when 88% of the Group’s backlog came from projects that directly contribute to the advancement of sustainable development goals.

This innovative approach is showcased by the Sydney Skytrain, a curved cable-stayed bridge for the  city’s new metro which, due to its exceptional characteristics, was awarded Engineering News Record (ENR) magazine “Project of the Year” in 2018.

Sustainability also means paying attention to the wellbeing of workers, and new organisational models are at the heart of the Group’s evolution. In Copenhagen, the Cityringen construction sites celebrated one million hours without accidents – a first for Denmark. In Genoa, the new Ponte San Giorgio was completed in record time after the Morandi Bridge collapsed thanks to an innovative system of parallel processing that allowed the Group to manage several sites together, despite the outbreak of the Covid-19 pandemic. While the lockdown linked to the pandemic blocked Italy, the construction of the bridge has never interrupted the works, becoming in a few weeks a national symbol of restart. A result achieved thanks to a joint commitment, to which over a thousand people have contributed, including engineers, technicians and workers and hundreds of supplier companies from all over Italy.

Sustainable mobility, environmental water management, desalination, hydroelectric plants for clean energy. Over the last twienty years, the best of Salini Impregilo’s international experience has been placed at the service of sustainable development and the most ambitious of projects: Progetto Italia. And it gave birth to the Webuild Group.

From an organisational point of view, this new multinational company is overseen by a strong (but lean) Corporate office. On an operational level, it is equipped with a system of well-tested processes and procedures, and a totally new corporate culture, with managers ready to compete with other major international players. Several different companies with different cultures and processes, enjoying wide  autonomy and little oversight from the headquarters, have now been merged into a large and highly  centralized Group, with centres of excellence and standardised procedures, which ensure guidance, support, control and the ability to capitalise on know-how to deliver a large number of heterogeneous projects around the world.

The Group has made a significant investment in young people, with special recruitment programs for hundreds of new graduates, the creation of a Master in Construction Management with the Milan Polytechnic, and co-operation agreements with Italian and foreign universities.

In recent years, the Group has embarked on a digitalisation journey, with a three-year IT strategic plan, and has also achieved important goals with the new Leadership Model, an Equality, Diversity & Inclusion policy, and the launch of an ambitious Mentoring program. To continue to grow in the long term, in a sustainable way.