From Berlin to Milan, from New York City to Paris, a look at the cities that are leading the way on sustainable mobility

How subways will save the world

The future of sustainable mobility will be shaped by the world’s large cities. The solutions these huge urban agglomerations find to re-design the transport system in a sustainable way will be decisive in protecting people’s quality of life.

A handful of large cities have already embarked on projects and transformation paths that will lead to sustainability and greater livability.

The City Mobility Index looks at the best practices in urban transformation, ranking the 10 most advanced cities in terms of sustainable mobility. These are described in the study “Mobility Futures. How mobility will be shaped by the world’s great cities,” carried out by the consulting firm Kantar Group.

From Berlin to New York City, from Milan to Paris, from Auckland to London, the study finds that these metropolises have all adopted the same recipe. It calls for investing in underground rail transport, and therefore in the city’s public transport network, focusing on intramodality by interweaving traditional routes with those designed for non-polluting means of transport (starting with bicycles and electric scooters), supporting a cultural change that will convince residents to leave their cars at home and move around using public transport.

In recent years, 10 leading cities, divided between America, Europe and Asia, have had the courage to invest in infrastructure projects of strategic importance and to design long-term development plans. They are already beginning to enjoy the benefits of this commitment in terms of development and quality of life.

Berlin, the capital of sustainable mobility

Berlin is leading the pack as the top ranked city for the mobility of the future: sustainable, intermodal, efficient, modern. From driverless subway lines to electric bikes, the tools for a new philosophy of urban transport are different in each city, but they have one thing in common: they always exclude the car. The German capital has made its transport network more sustainable by promoting the use of new technologies that offer residents rapid access to the most efficient transport data and information.

After Berlin, the other two places on the podium are Auckland and Moscow, two cities that in recent years have undergone a profound transformation driven by the launch of major infrastructure projects. After Moscow, New York City takes fourth place, followed by Munich, Milan, Montreal, Warsaw, London and Paris.

Three of the top 10 positions in the City Mobility Index are occupied by a trio of European metropolises that have launched ambitious infrastructure projects to construct new subway lines with a strategic impact on the future development of the urban fabric.

Milan, the sixth-ranked city in the Index in terms of sustainable mobility, is currently building the M4, the fourth subway line that will connect Linate airport to the city centre in about 15 minutes.

The new line, built by the Webuild Group, will be 15 kilometers (9 miles) long with 21 stations crossing the entire city from east (Linate airport) to west (San Cristoforo station) in just 30 minutes. The project will reduce congestion in the city, since the driverless trains will run as quickly as every 90 seconds during rush hour and will be able to transport 86 million people in a year.

Paris has launched an even more ambitious mobility project than Milan with the construction of the Grand Paris Express. Because of the size of the investment and the project (about 200 kilometres, or 124 miles, of underground lines, 68 stations and a total cost of over €35 billion) the Grand Paris Express is considered Europe’s most important experiment in sustainable mobility. The Webuild Group is one of the companies involved in the construction of two of the project’s four lines: the extension of line 14 to Orly airport and lot 2 of line 16 that will serve the north and east of the metropolitan area.

Meanwhile in London, the Crossrail project is a new line (also called Elizabeth Line) with 40 stations bringing 1.5 million more people within a 45-minute ride of their workplaces in the West End, the City and Canary Wharf, and will serve 200 million people a year.

These are three examples of how sustainable mobility can be put at the service of urban development, starting with a change of a cultural paradigm: leaving the private car at home and taking public transport. 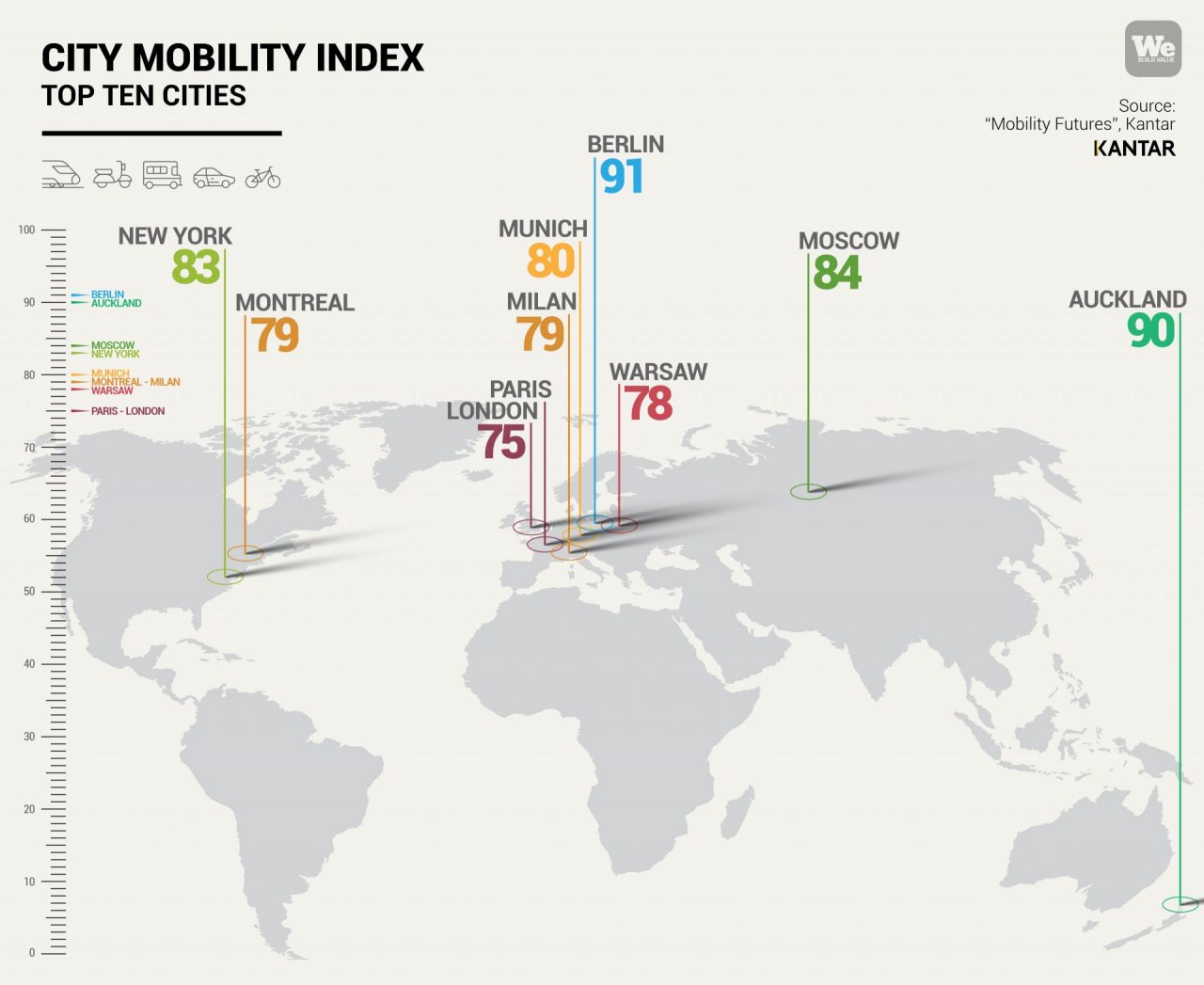 An efficient public transport network is certainly the first step on the road to transforming large cities. But new public transport infrastructure as well as green projects based on incentives to use bicycles or electric scooters are not enough on their own. Alongside the new transport opportunities, cities need to trigger a cultural change that affects the lifestyle of its their residents.

Currently, 39% of urban commuters drive to their workplace alone, the study says. Car sharing between colleagues, which would reduce traffic and pollution, is also a very rare practice. Changing these habits and abandoning one’s own car in favour of public transport is an important starting point, and one that many people desire.

The study analysed mobility trends in 31 of the world’s largest cities and interviewed over 20,000 people. It found that most people want to change the way they get to work. By 2030, the use of alternative methods of transport to the private car should grow by 25% compared to today. Already today, 37% of those who use a car to get to work would gladly leave it at home.  Forty-two percent of public transport users would be happy to find an alternative way to get to work.

But abandoning the car, and thus contributing to the reduction of traffic and air pollution, is a process that can only be achieved by offering people alternative solutions. That’s why new transport infrastructure is so important for the megacities of the future.

Smart city in the world: here are the most technological cities

Going Green: a new future for infrastructure to preserve the planet