Norway’s record-setting plan for the roads of tomorrow

Roads, tunnels, bridges and viaducts. A complex road system necessary to reduce traffic congestion, shorten travel times and cut back on air pollution. In western Norway, one of the countries most committed to the modernisation of its transport system, Sotra Link AS is ready to start construction on a state-of-the-art road network in the county of Vestland, called the Sotra Connection PPP Project.

The Norwegian Public Roads Administration (NPRA), which is commissioning it, has set all the conditions for the Economic-Financial Plan for the NOK 19.8 billion (€2.0 billion) contract, which includes financing, design, construction and multi-year management of the road system. The contract was awarded in the form of a public-private partnership (PPP) to Sotra Link SA, of which the Webuild Group is a member along with Macquarie and SK ecoplant.

The massive infrastructure project calls for the construction of a road system consisting of more than 9 kilometres (more than 5.6 miles) of highways; a 900-meter-long, 30-metre-wide suspension bridge with 144-metre-high pylons between Øygarden and Bergen; 12.5 kilometres of tunnels and galleries; 23 tunnel accesses; 22 bridges and viaducts; 19 road and pedestrian underpasses; and 14 kilometres of pedestrian and bicycle paths. 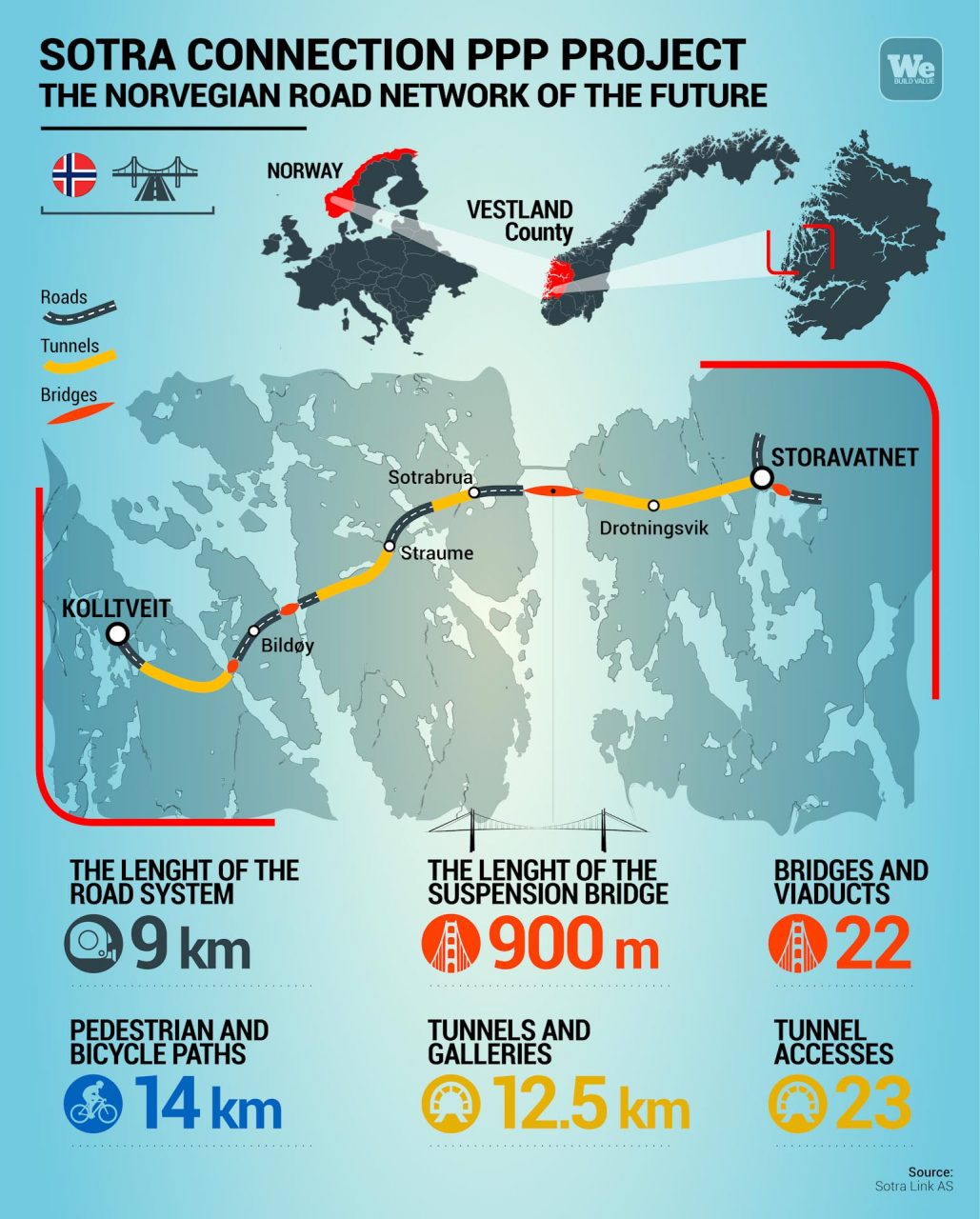 Located in the heart of Vestland among the world-renowned Bergen fjords, the network will allow for speed and safety, an objective that the government has set for itself in recent years. Webuild is a solid and reliable partner in helping Norway achieve this objective. The Group is already involved in the modernisation of a 13.6-kilometre section of a railway that connects the cities of Nykirke and Barkåker, south of Oslo.

“Norway is a market of strategic value for the Group,” said Webuild Chief Executive Pietro Salini. “We have been in this country for over 15 years and we have seen that values such as innovation, sustainability and inclusion – part of our Group’s DNA – are also fundamental elements for the country that hosts us.”

Norway's goal to make the fjords easier to travel

Modernising the transport network amid the complex geology of the fjords, is one of Norway’s primary objectives under its “2018-2029 National Transport Plan,” namely a safe, efficient, and environmentally friendly transport system.

In addition to the Vestland project, the NPRA is carrying out other major public works such as road redevelopment in the country’s west and southwest.

For example, work on the E39 – known as the “fjord freeway” –  began some time ago. The project concerns 1,100 kilometres between Kristiansand to the south and Trondheim to the north. It passes through cities such as Stavanger, Stord and Bergen before reaching Molde next to a fjord on the west coast. The development an improved route with tunnels and bridges suspended over the fjords is necessary to improve the old E39, which today requires vehicles travelling from one end to the other to take a ferry seven times to cross as many fjords. When the new highway will be built, the travel time between the two extremes will fall from 21 hours to 10, resulting in a significant reduction in transport costs. It is yet another important infrastructure project to support the development of Norway and its transformation into a leader in modern and sustainable infrastructure.

Lima: the mega-city moves ahead on Line 2

Mireille: a TBM gets a female welcome as it marks its first breakthrough for a Paris metro line