Eastern Europe must chose infrastructure investment to fight the crisis

The supporting cables are up, and floating tens of meters above the waters of the Danube. For four months, 150 people worked to assemble these two enormous cables: 18,000 intertwined steel wires, a total weight of 6,775 tons and a cumulative length of about 38,000 kilometres, or 23,612 miles (just a bit less than the circumference of the earth). All this to support the weight of the Brăila Bridge, the second-longest suspension bridge in Continental Europe.

The construction site is located in Romania, where a joint venture led by Webuild Group is on the job completing a highly complex work that will significantly improve area’s mobility, allowing the 7,000 vehicles that cross the great river on ferries every day to make the leap in two minutes. Right now, it takes them 45 minutes.

A bridge over mainland trade

Looking down on the river from the Brăila area (a small town of about 200,000 inhabitants in eastern Romania), the Danube looks like an insuperable sea, surrounded by green plains. We are 165 kilometres (102 miles) from the river delta and 8 kilometers (5 miles) from the center of Brăila, a strategic area for national and international trade because of its proximity to one of the most important commercial ports on the river. In fact, the economy of Brăila is almost entirely linked to commercial traffic on the Danube, thanks to an infrastructure capable of accommodating medium-sized ocean-going vessels. That’s why the construction of the bridge is so important. It was commissioned by CNAIR, the state company headed by the Romanian Ministry of Transport and Infrastructure and financed by the European Union’s Operational Programme for Large-Scale Infrastructure (POIM). Europe’s goal is to develop the economy of the Tulcea District (which includes the nearby Danube Delta area, selected by UNESCO for its list of World Heritage Sites and Biosphere Reserves, and therefore a tourism destination). It also includes Brăila (the area around the bridge), and Romania entire northeastern region.

Braila bridge: the details of an iconic work

Nine hundred people at work, 100 direct suppliers, plus some of Webuild’s best engineers and technicians. With this workforce, the bridge worksite is progressing rapidly, and nearly 58% of the project has now been completed. The design calls for a suspension bridge with a central span of 1,120 metres (3,674 feet), a total length of 1,975 metres (6,479 feet) and equipped with 4 lanes of traffic, with emergency lanes, bicycle and pedestrian paths. 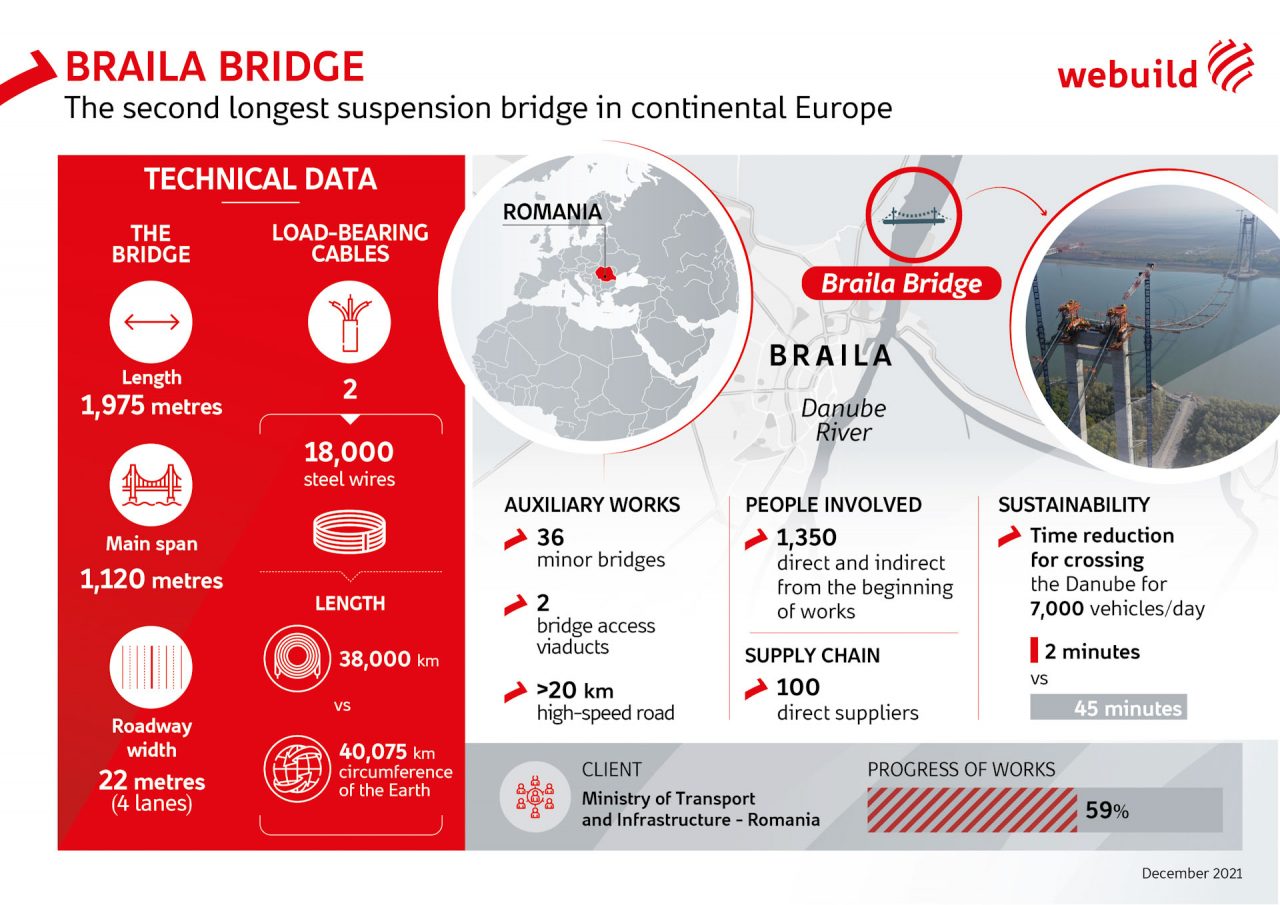 The bridge will then be connected to the rest of the existing road system, which also calls for the construction of two access viaducts, each 90 meters long, a 220-metre (721-foot) viaduct necessary to cross the Brăila-Galati railway, as well as a new 21-kilometre-long (13-mile) connecting road network.

All these ancillary works are part of the project being carried out by Webuild together with its Japanese partner IHI Infrastructure Systems Co Ltd. This work is a complex one also because of the soft clays present in the soil, and the medium-high seismicity of the area. Highly advanced techniques were used, even for the foundation of the bridge, such as large-diameter piles, extensive and deep well excavations, as well as the most advanced systems for water extraction from underground aquifers.

From the Long Beach International Gateway Bridge in California to the San Giorgio Bridge in Genoa, from the Third Bridge over the Bosphorus in Turkey to the Skytrain in Sydney, Australia. Webuild’s history is marked by the construction of unique bridges around the world, a total of 1,000 kilometres (621 miles), the equivalent of a single large bridge that would connect Paris to Berlin. 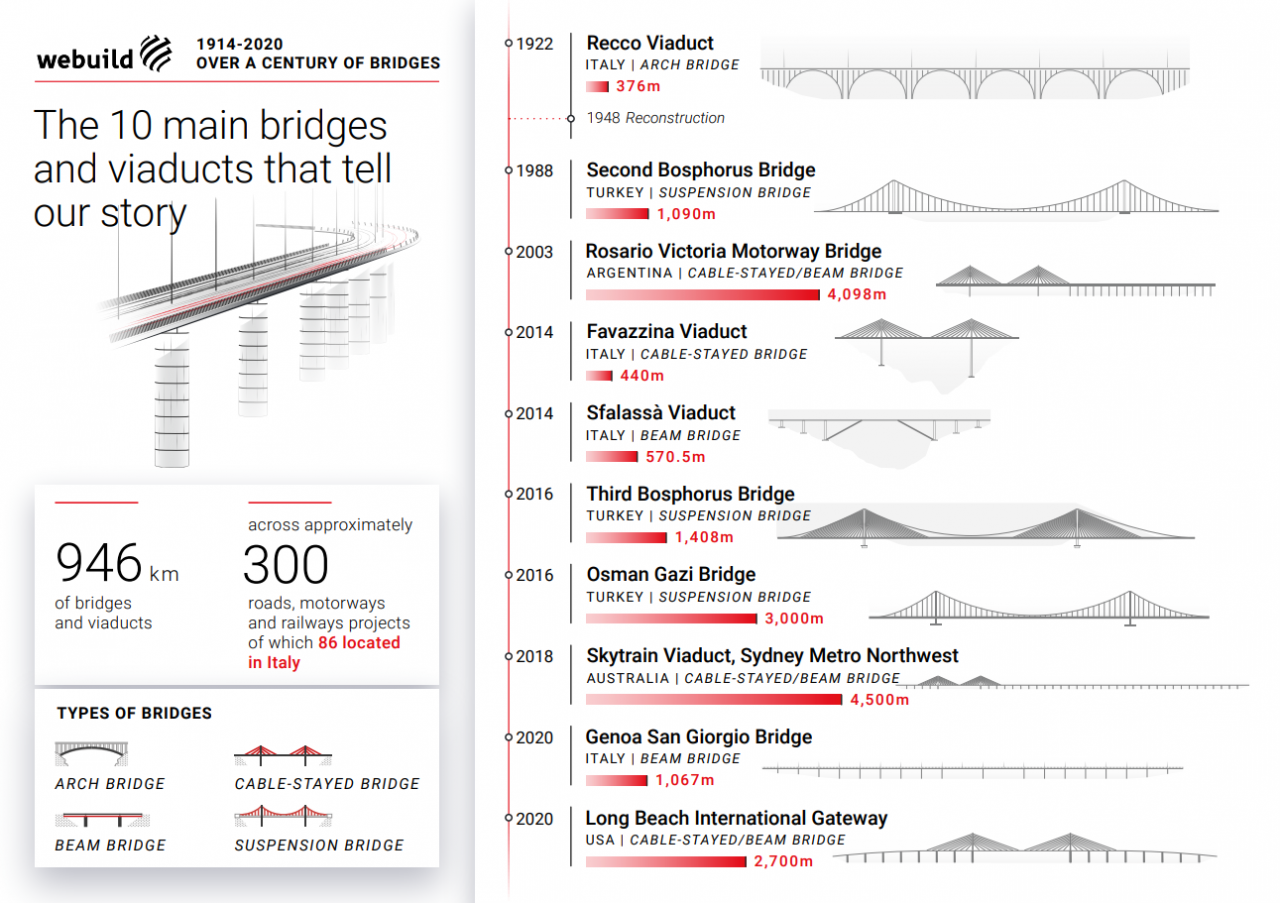 This history goes back more than a century, beginning in 1914 with the construction of the Recco Bridge, a railway viaduct that connected Northern and Central Italy, destroyed by bombing during the Second World War and then rebuilt. Since then, bridges have been part of the major infrastructures built by the Group. The Faith Sultan Mehmet, the second bridge over the Bosphorus with a span of 1,090 metres (3,576 feet), or the Rosario-Victoria bridge over the Rio Paranà, which has become a link between four Latin American countries (Chile, Argentina, Uruguay and Brazil) and can halve the time needed to travel between the cities of Rosario and Victoria.

Major modern works that significantly reduce the amount of time vehicles spend on roads, and improve rail transport in the case of railway viaducts, and thus contribute to the goal of achieving increasingly sustainable mobility.