Over 1,000 people at 27 worksites on Megalot 3 of the highway linking the Tyrrhenian, Ionian and Adriatic seas at the tip of Italy’s boot

Roseto Capo Spulico is a small town in Italy’s deep south in the heart of Calabria, numbering just 2,000 inhabitants and boasting a castle overlooking the sea.

Back in the days of Magna Graecia, flower petals from the ancient rose garden from which the town takes its name were collected to fill the pillows of the princesses in the nearby town of Sibari, 38 kilometers (17 miles) away. Today the distance between these two towns will complete a road connecting the three seas that bathe the coasts of Italy: the Tyrrhenian, the Ionian and the Adriatic.

Thirty-eight kilometers that is part of the SS 106 Jonica, the state-owned highway (the maximum speed will be 110 km/h, or 68 mp/h) seen as one of the major infrastructures that will contribute to the modernisation of Southern Italy.

The section will complete the link between Reggio Calabria, in the toe of Italy’s “boot” in Calabria, and Taranto, in Puglia, thus making it possible to cut horizontally across Italy to Bari and from there climb northwards along the freeway that runs along the Adriatic coast.

The watchwords of Megalot 3 (the section of highway construction awarded by Italy’s state-owned ANAS to the Sirjo Consortium including WeBuild) are safety, sustainability and speed. Once completed, it will take only 20 minutes to cover the route between Sibari and Capo Spulico as opposed to the 36 minutes required today, making this infrastructure into a major arterial road. According to forecasts, in the tenth year of operation, 12.5 million vehicles will cross the SS 106 Jonica every day, destined to become 19 million by the 20th year.

At work on SS 106 Jonica, the superhighway of the three seas

On one side the sea, on the other the Apennines. The new SS 106 Jonica runs for its entire route at a distance varying between 150 metres (492 feet) and 4 kilometres (4.5 miles) from the sea. The Ionian Sea is just a stone’s throw from the highway. The 27 construction sites open in Megalot 3 have completed 25% of the total amount planned by the project. The delivery date is set for August 9, 2026. To meet this deadline, the Webuild Group has put its best professional skills to work. Not only engineers, but also local technicians and workers. Currently there are about 1,000 people working in the sites, which will rise to 1,500 in 2024, when the peak workload is expected.

“The staff has been selected mainly from areas close to the sites, and Calabria is a region that offers many miners, essential for the excavation of the tunnels. In general, we can say that, between our suppliers and workers, about 60% of the total number of employees comes from Calabria,” says engineer Salvatore Lieto, CEO and engineer at the Sirjo Consortium.

The first 18 kilometers of the route runs along the Sibari plain, while the remaining 20 must traverse the Apennines and requires the excavation of 11 kilometres (6.8 miles) of tunnels including natural and man-made, as well as the construction of 6 kilometres (3.7 miles) of viaducts with piers over 40 metres (131 feet) high and spans up to 120 metres (393 feet) long. At the end of December work began on the Trebisacce tunnel, while work continues on the Roseto tunnel, which will be 1.1 km long and where 250 people are already at work. 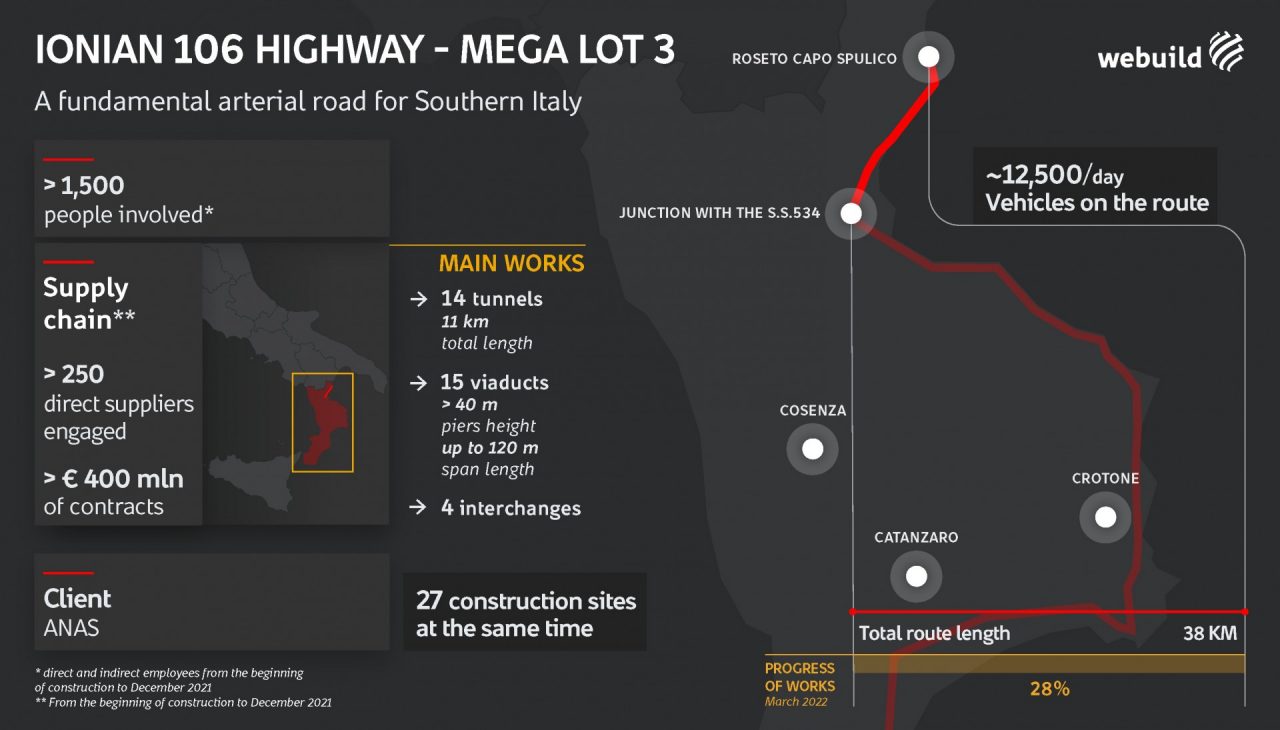 A sustainable work for southern Italy

The new SS 106 Jonica has been designed with safety and sustainability in mind. Safety because the new highway has two separate carriageways with a pavement width of 9.75 metres (31.9 feet) each; sustainability because many of the works are designed to have a minimum impact on the environment.

Excavation materials are being almost completely reused in the construction sites themselves. According to calculations, the total amount of excavated earth for the construction of the tunnels will reach 1.3 million cubic metres. Of this amount, 250,000 cubic metres will be stored in an ad hoc deposit; the rest will be used for other works, from road embankments to aggregates for making concrete.

In the same way, in order to reduce the work on site and the movement of concrete mixers as much as possible, many of the components have been built elsewhere and transported here already completed. This is the case, for example, of the artificial tunnel caps.

“On the one hand, we have guaranteed a break-even in terms of raw materials,” explains engineer Salvatore Lieto. “On the other hand, we are making extensive use of prefabricated items, aimed at safeguarding the landscape both in the construction and in the final phase.”

From the SS 106 Jonica to the Naples-Bari high-speed railway, up to the high-capacity railway (the first in the history of Sicily) that will connect Catania with Palermo, Webuild is working on many projects that will contribute to modernising Italy’s underdeveloped south.

The push to relaunch the south has also come from the Italian government and funds provided by the National Recovery and Resilience Plan, (NRRP) which allocates over 40% of the total resources to the south. The plan calls for €33.8 billion ($37.1 billion) to be invested in infrastructure in the south, 56% of the total infrastructure spending.

As Infrastructure and Sustainable Mobility Minister Enrico Giovannini said in a recent interview: “These are unprecedented measures. The high-speed rail ways Naples-Bari, Salerno-Reggio Calabria and Palermo-Catania confirm the government’s willingness to respond to the needs of areas that have been historically penalized by a lack of investment, and to promote social development and economic competitiveness, as well as to reduce inequalities and accelerate the ecological transition.”

These essential infrastructure projects will help southern Italy attain a long-awaited level of development, in the name of safety and sustainable mobility.