Work has started on the Jonica highway, one of southern Italy’s strategic traffic arteries

It’s a strategic traffic artery that connects the toe of Italy’s “boot” to its heel. Built in 1928, the SS Jonica 106 has long been beleaguered by a short, obsolete stretch at the half-way point that causes bottlenecks and is plagued by unsafe traffic conditions.

That is about to change. The road joining Reggio Calabria and Taranto celebrated a new milestone in its history on Tuesday May 19, when the first stone of a new section called Megalotto 3 was laid in Francavilla Marittima near the city of Cosenza. The SS 106 is getting a facelift worth about €800 million, commissioned by Italy’s state highways operator ANAS as part of a total investment of €1.3 billion.

This improvement to the SS 106 is being built by the Sjrio Consortium, formed by the Webuild Group as part of the Progetto Italia merger project that will strengthen and relaunch Italy’s infrastructure sector.

“Jonica” highway: an important project for the South

The project is scheduled to last seven years and employs 1,500 people not including indirect jobs. Megalotto 3 calls for improving a 38-kilometre (24-mile) section that was so unsafe that locals call it “Death Road.” The new section will run from Sibari to Roseto Capo Spulico, about 1 kilometre (0.6 miles) away from the current route, thus connecting the coasts of Calabria, Basilicata and Puglia and creating a strategic hub for interregional transport and tourism thanks also to its link with the main A3 north-south motorway.

The existing road was dotted with unsafe crossings. The new SS Jonica 106 will be totally different: a modern and complex infrastructure that passes through a hilly landscape thanks to 11 kilometres (6.8 miles) of twin-tube tunnels and 6 kilometres (3.7 miles) of viaducts. At the same time, it will have a low visual impact on the landscape, since it passes through the historic part of Italy known in antiquity as “Magna Grecia.” The project calls for a redevelopment of the Archaeological Park of Sybaris, an important heritage site in a region rich in history and beauty.

Infrastructure to spark the South’s economy

The construction of the new SS 106 is part of TEN-T (Trans European Transport Network), the European Union investment programme that will connect the farthest corners of the continent by building an efficient and modern transport network.

The Webuild Group, which has built 80,291 kilometres (49,800 miles) of roads and motorways around the world over its 110-year history, is working on some of the most significant construction sites in southern Italy.

In addition to the Jonica highway, work is underway on the high-speed railway line that will connect the cities of Naples and Bari, linking them in turn to the high-speed line to Rome and Milan, and the north of the country.

WeBuild is handling the construction of the 18-kilometre (11.1-mile) long Apice-Hirpinia section of the Naples-Bari line, and for the Naples-Cancello section (15.9 kilometres, or 9.8 miles), also part of the TEN-T project.

WeBuild is also involved in another railway upgrade in the south. In Sicily, the group is doubling the Bicocca-Catenanuova section of a line connecting Catania to Palermo, cutting journey time to two hours.

Work started on 25 March, employing 1,000 people. This project is also part of the TEN-T corridors selected by the European Union. 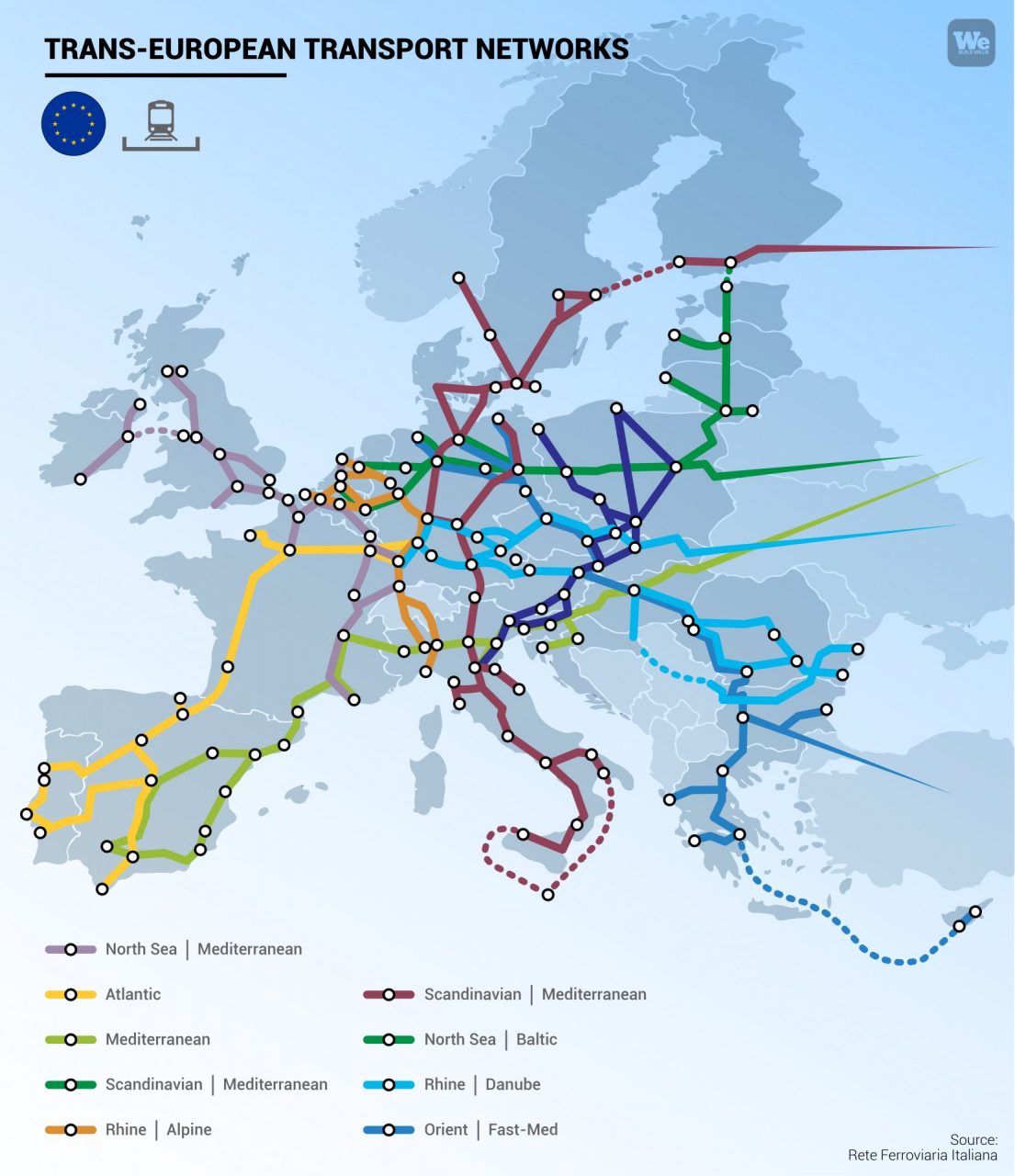 From the southern tip of Italy to Austria, France and beyond, the TEN-T road and rail corridors will link most EU member states in the coming years, promoting the goal exchange of people and goods.

There are nine corridors picked by the EU, and four of them directly affect Italy. One connects the Baltic Sea with the Adriatic Sea; one that connects the Russian-Finnish border with the Mediterranean; one stretches from the Netherlands to Genoa, and the last one travels from Northern Europe to Sicily. Italy is therefore a central junction of European infrastructural planning, not only along the country’s north-south route (from Milan to Naples and in the future up to Bari), but also in an east-west extension.

“The challenge in Italy is not planning new infrastructures — with the risk of waiting years before the first stone is ever laid – but implementing them quickly by simplifying processes and guaranteeing liquidity for companies,” explained Webuild CEO Pietro Salini during the ceremony marking the start of works on the SS 106. “Many projects are already ready on paper and the funding is there for them to start immediately, from hospitals to road maintenance, from new subways.”

Genoa Bridge: the finish line is in sight

Favazzina: the viaduct suspended in mid-air