Women: Blazing a trail in infrastructure

Women make up 47% of London’s workforce, but only 21% in the city’s infrastructure sector. This huge gap has become the focus of a committee set up by Mayor Sadiq Khan, who has also commissioned a report that analyses diversity and inclusion in London’s infrastructure sector. The mayor believes that diversity is important for London’s ability to grow in the future, and to maintain its status as one of the most vital and modern European capitals.

Mayor Khan has used the study to raise a political issue, making the theme of gender inclusion one of the drivers of London’s infrastructure development plan, underlining the importance of equal gender opportunities in such a strategic sector for the city.
«As Mayor of one of the most diverse cities in the world, I want one of London’s biggest sectors to reflect the diversity of experience and thought this city has to offer», he wrote in the introduction to the report.
It is no coincidence, then, that the mayor has set up a new Infrastructure Advisory Panel (IAP), an advisory body for strategic infrastructures, in which 70% of the members are women.

«London’s infrastructure serves millions in their day-to-day lives – meeting their transport, digital, water and energy needs», writes Khan. «The infrastructure sector employs a significant proportion of London’s workforce to keep the city running smoothly and to enable it to grow. It’s important that it represents the Londoners it serves. But some groups remain underrepresented in its workforce».

The report on diversity in infrastructure

The issue of diversity and inclusion in the sector has come under scrutiny because infrastructure is a critical area for the city’s future, capable of attracting and training talent which in turn must reflect the community in which they live.
The consultancy Britainthinks published in February the report, entitled «Supporting Diversity and Inclusion in the Infrastructure Sector», after conducting interviews with senior stakeholders to collect all available data on diversity and inclusion, and identify policies to promote greater integration in the sector. 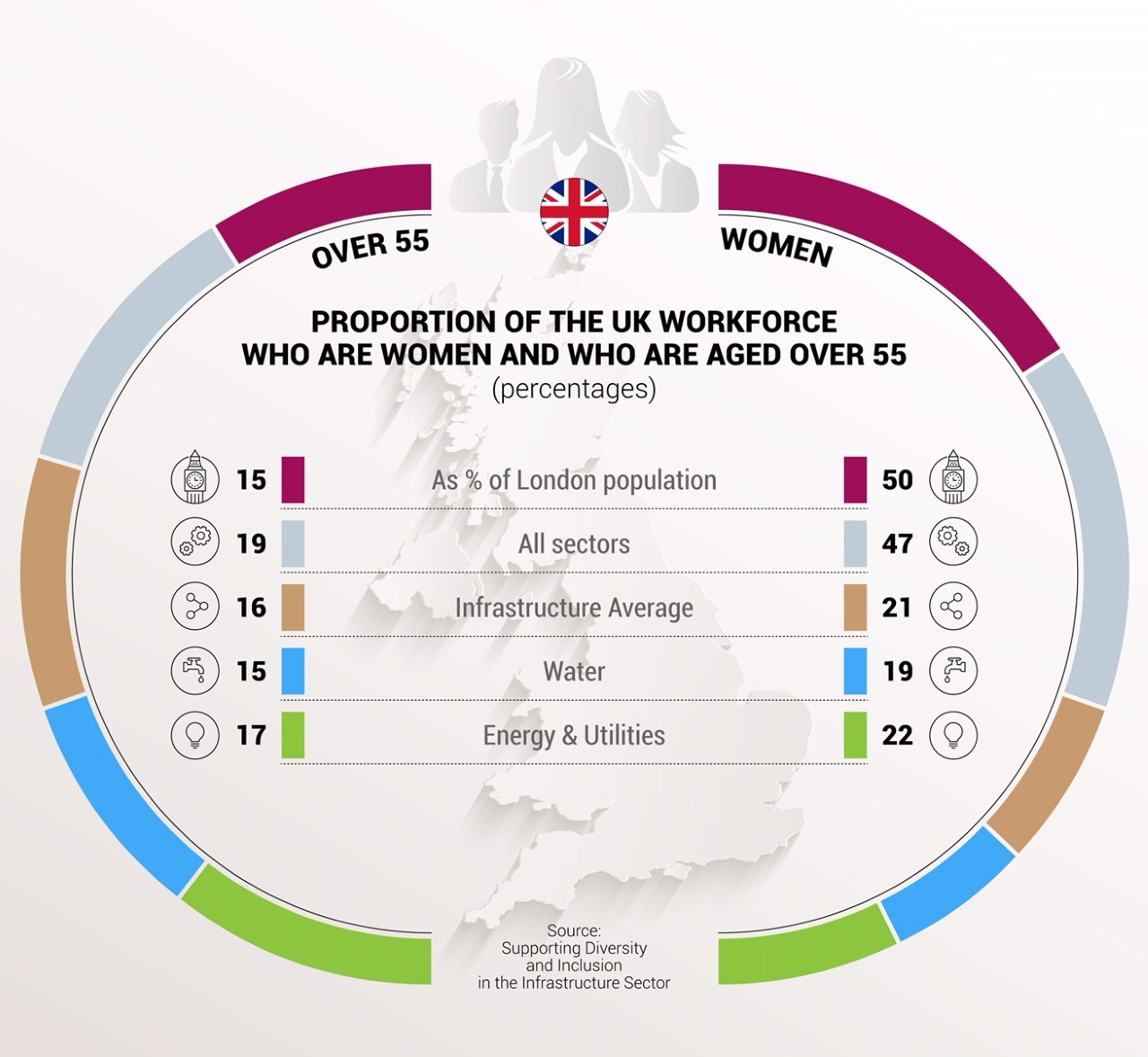 Lagging behind, the study shows

The infrastructure sector in London lags behind in diversity, especially regarding women.
In general, only one in five workers in the sector is a woman (21% of the total), with some small differences from segment to segment. In water infrastructure, only 19% of employees are women, while 22% of workers in the energy sector are female.

Although statistics show that more work can be done on inclusion, some progress has been made in recent years. In water, some important groups such as Northumbrian Water, Severn Trent, NI Water and Affinity Water are represented by women CEOs.
In engineering, for example, the Women’s Engineering Society reports that the number of women in engineering roles rose from 9% in 2015 to 11% in 2017, with the best figure achieved in the transport sector, where new female engineer trainees accounted for 15% of the total intake.

There are even fewer women when it comes to operational tasks, especially workers, and in management roles. Men account for 95% of blue-collar workers. Among managers, 77% are men — higher than the 65% of male managers elsewhere across all sectors.

The need for new professional skills

To attract people, some London utilities have launched innovative programmes. Network Rail, the company that manages the city’s railways, has launched the 20by20 project, which calls for women to make up 20% of its total workforce this year, up from 16% in 2016 and 18% last year.
In recent months, the company has published recruitment announcements, advertising and other measures aimed at attracting the interest of female professionals.
This is a sign of the change now underway in London as the city responds to the need for more inclusion.

Coronavirus: investments and health protection to overcome the emergency