Tokyo, infrastructure at the service of the Olympic Games

Stunning new architecture, but also repurposed and renovated structures for the 42 venues of the Tokyo Games

Japan runs on a train that floats

Fifty-six years have passed since the last Tokyo Summer Olympics in 1964. The Tokyo 2020 Olympic Games have been transformed by anti-Covid-19 measures into what some say risk being “the saddest Olympics in history” because they are taking place without a live audience.

Sad or not, the Japan Olympics are the most expensiveThe price tag of new facilities among the 42 venues, the costly delay due to Covid-19, and a cumbersome organisational apparatus because of pandemic safety measures have combined to push estimates through the roof.

According to Japanese government auditors’ estimates, the total cost of this edition will be as much as $25 billion.. Of the 42 venues, 8 are new and permanent; 24 already existed; and 10 are temporary.

From the $1.4 billion Olympic Stadium to the smaller buildings, the organisers decided to distribute the venues across the vast city, hoping to duplicate the same sort of redevelopment that London experienced during its Olympic Games in 2012.

And so 26 structures were built in the central Heritage and Tokyo Bay areas, while neighbouring districts were chosen for the remaining 16. These works of architecture large and small are scattered throughout the metropolis, and over the next few years will become the visual legacy of these Olympics and at the same time valuable tools for urban redevelopment. 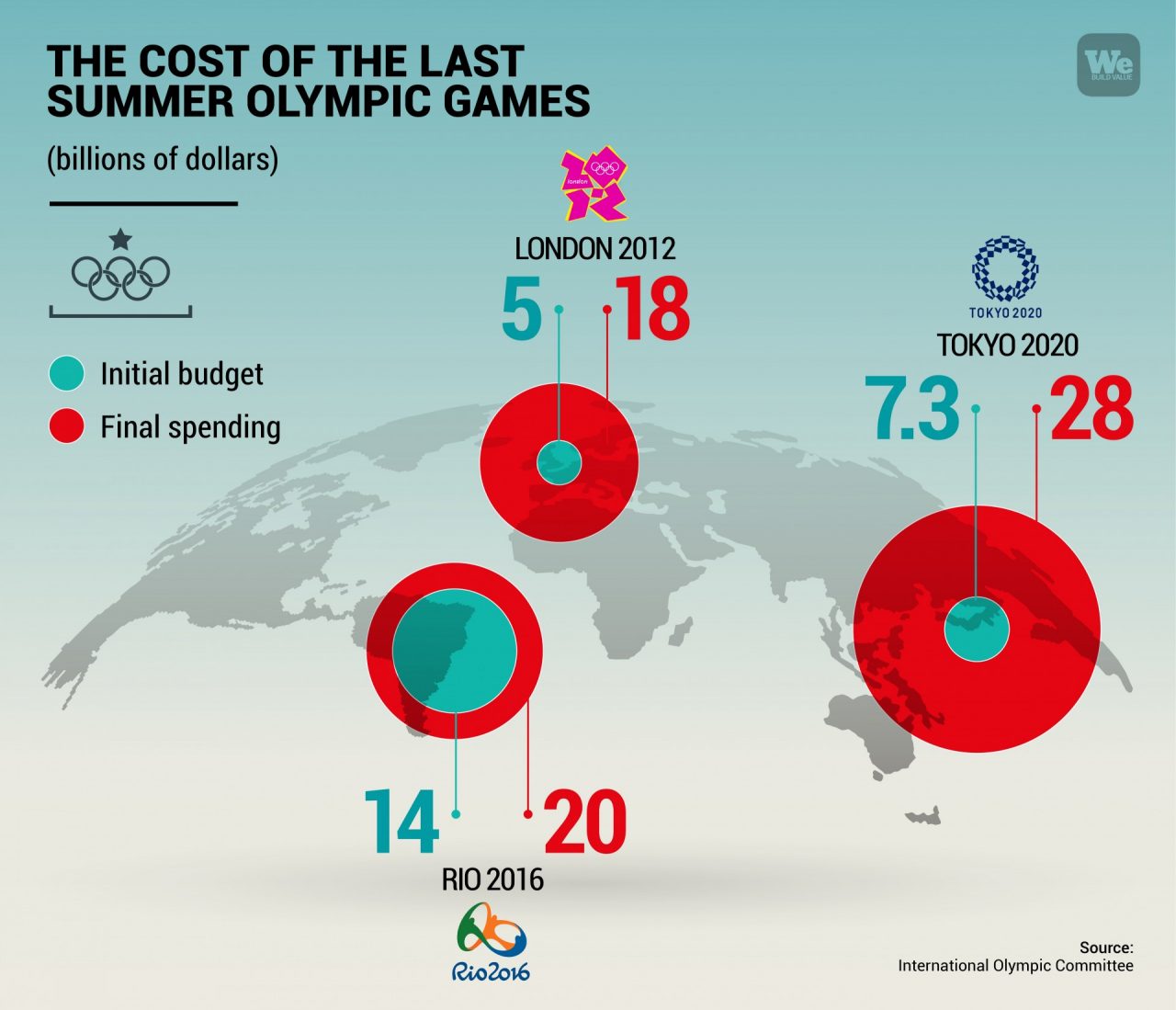 From the 1964 Games to today, the Olympics have always been a great showcase for the best names in world architecture. From this point of view, Tokyo Olimpics 1964 will be remembered for the Yoyogi National Gymnasium designed by Japanese architect Kenzo Tange, who was able to inaugurate a new trend of “Olympic architecture.” In the following years, many followed in his footsteps: in 1972 in Munich, the architect Frei Otto created a stadium in the shape of a tent; Beijing in 2008 saw the “bird’s nest” stadium; in London in 2012 Zaha Hadid designed her spectacular Aquatics Center. The 2020 Tokyo Olympics (moved to 2021 because of Covid-19) only partially celebrated this tradition. The most innovative buildings, that have redesigned Tokyo’s skyline, are the Olympic Village, resembling huge blocks and built just like a village with a central square designed to become a meeting place for athletes.

Apart from the Olympic Village, the most significant and striking construction is certainly the new   Japan National Stadium by Kengo Kuma, chosen over a competing project by Zaha Hadid Architects for its lower costs. Even still, the National Stadium, capable of seating 68,000 people, cost $1.4 billion. For its construction, one of the most-used materials was wood, while the structure is surrounded by horizontal elements that evoke the overhanging eaves of traditional Japanese buildings.

Renovate and reuse: the future of construction starts from the Olympics

One of the pioneering choices made by the organisers of the Tokyo 2020 Olympics concerned buildings. For the first time in the history of the Games, organisers opted to reuse old structures with a view to redevelopment, protection of the existing heritage and reduction of waste. This choice was not made for economic reasons, but were motivated by sustainability in the construction industry.

In fact, 34 of the 42 structures that hosted the event were old buildings that were renovated and reused. The International Olympic Committee has suggested that venues be reused in the future, and Paris is taking this advice for the 2024 Games. The organisers of the Paris Olympics have announced that 95% of the facilities will be either existing or temporary sites, and added that “polluting gas emissions for Paris 2024 will be in line or even lower than those recorded in the two previous editions of the Games.”

Sustainability is a key issue for the Olympics, and must now include the symbols of this most prestigious event in sports: the buildings that host the competitions. Stadiums, arenas, meeting places, and villages for athletes are all evolving from expressions of architectural genius towards becoming examples of sustainable buildings, designed to remain even after the competitions are over, and help to redevelop the urban spaces that host them.