From the Sky Tree to Toranomon Hills, here are the giants that have redesigned Tokyo’s skyline

At first glance, Tokyo is striking for its vastness: the suburbs populated by low, identical houses, the broad shopping avenues of the center, the crosswalks invaded by thousands of people.

The Tokyo of skyscrapers (one of the cities with the highest density of skyscrapers in the world) is a recent phenomenon that only began to take shape after the 1963 law that abolished the 31-meter (101-foot) height limits for buildings, and took off with the economic boom and the 1964 Olympics. It continued during the real estate bubble of the 1990s and now Japan’s megalopolis, the most populated of the country’s 47 prefectures, is dotted with skyscrapers.

Today the city has 53 structures that exceed 185 meters (606 feet), all “daughters” of the Kasumigaseki Building, considered the first skyscraper in the city, completed in 1968 with a height of 156 meters (512 feet) divided into 36 floors.

Since then, modern architecture has exploded in Tokyo, concentrated mainly in the 23 special districts that make up the inner urban area of the city, and in particular in the Shinjuku district, where in 1971 the Keio Plaza Hotel was built and where today 13 of the 53 tallest buildings in Tokyo are located.

The race to build more steel and glass giants has not stopped in recent years either. Since 2015, 10 buildings exceeding 185 meters have been completed, while 11 new skyscrapers have started construction since May 2020.

Though a late starter, Tokyo’s race shows no signs of stopping, and lives on in the testimony of the five tallest skyscrapers in the metropolis.

The Tokyo Sky Tree is the tallest tower in Japan. This telecommunications and observation tower (the tallest of its kind in the world) reaches a height of 634 meters (2,080 feet).

Tokyo residents consider it as the heir to the Tokyo Tower, 333 meters (1,092 feet) high and very similar in shape to the Eiffel Tower in Paris. However, because the Tokyo Tower’s signal was unable to reach the entire city, a group of six terrestrial broadcasters led by the Japanese public broadcaster plus a railways group financed the construction of this new structure, which was opened to the public on May 22, 2012 after about four years of work.

Designers envisioned two viewing points: the first at 350 meters (1,150 feet), with a capacity of up to 2,000 people; the second at 450 meters (1,480 feet), with a capacity of 900 people. The tower is an example of engineering and architectural excellence because, despite its size, it is entirely earthquake-proof, thanks to a central core in reinforced concrete made with a supporting pillar attached to the external structure. The same pillar is connected to the tower through a hydraulic system that works as a shock absorber in case of earthquakes. 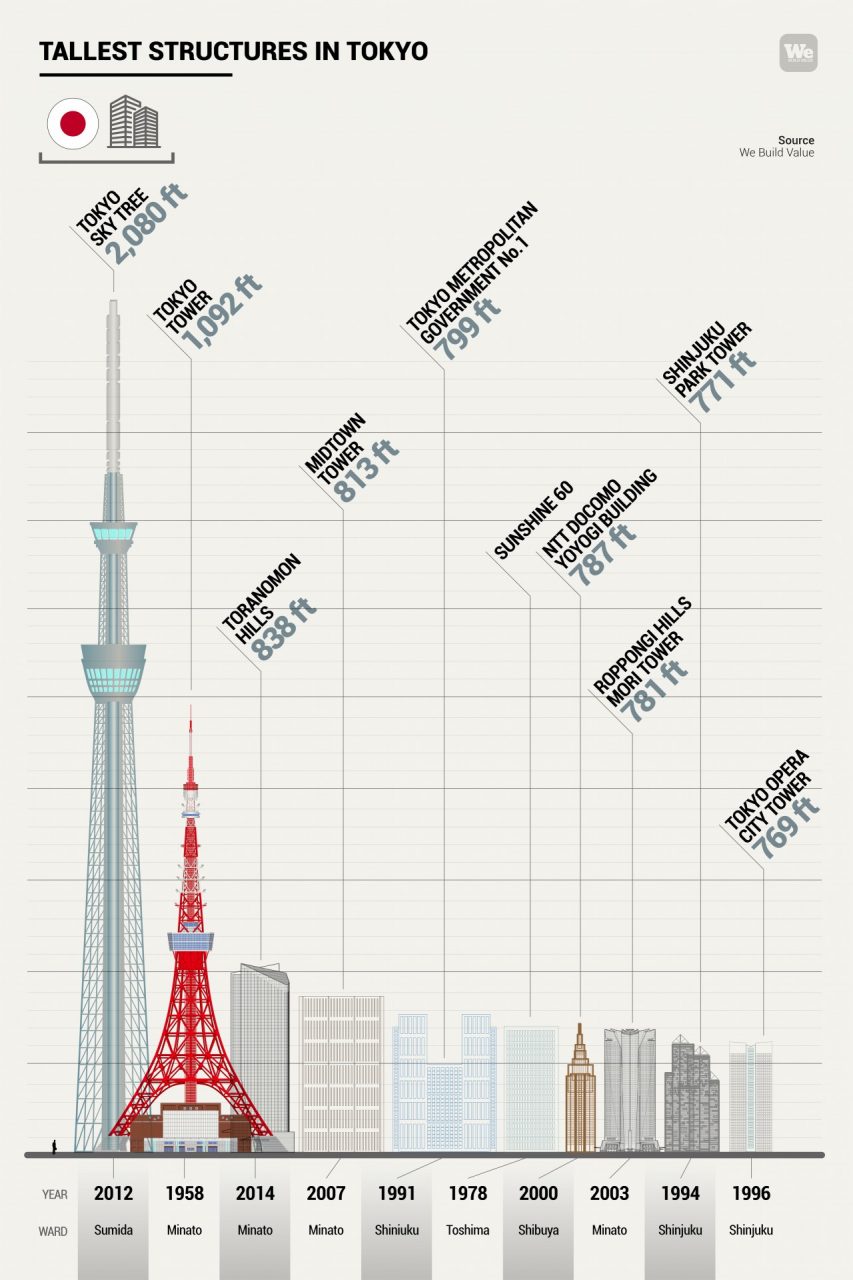 In addition to being the “mother” of the Tokyo Sky Tree, the Tokyo Tower is also the second tallest structure in the city. Built in 1958, the 333-metre-high (1,092-foot) tower was built specifically for television broadcasting and is still used today to transmit signals for Japan’s major television stations (and as a tourist attraction).

Its structure, completed in 1961, resembles the Eiffel Tower in Paris and was initially conceived to surpass the Empire State Building’s height of 381 metres (1,250 feet). In reality, that project was scrapped and Tachu Naito, one of Japan’s most important skyscraper architects, was called in to design the tower. He laid out the tower’s characteristics based on the requests of the television stations that financed the project.

More than 400 people were engaged every day to complete the work that soon became a symbol of environmental protection. One third of the steel used was recycled from the scrap of American tanks used in the Korean War.

Apart from the two towers, the tallest building in Tokyo is the Toranomon Hills. The skyscraper was built by Mori Building, one of Japan’s largest companies in the sector, in the Toranomon district.

Standing 255.5 metres (838 feet) tall, the skyscraper rises around Loop Road No. 2, a recently constructed freeway in the city to connect the central districts of Shinbashi and Toranomon.

The tallest skyscraper has been incorporated into a residential hub of innovative buildings, completed between 2014 and 2020, and partly still under construction. The Toranomon (errore dattilo!) Hills Residential Tower, the last of the center’s towers, is expected to be completed in 2021.

When fully completed, the “Toranomon (errore dattilo!) Hills” complex will have an area of 7.5 hectares (800,000 square metres), with offices, private residences, stores and shopping centers. This massive work is integrated with an efficient transport infrastructure, in particular the Tokyo subway and train.

The goal of Mori Building is to create a business center that will surpass the impact of Mori’s own world-renowned Rappongi Hills complex.

Although completed in 2007, the Midtown Tower is still one of the highest buildings in Tokyo. At 248 metres (813 feet), it is the tallest of the six buildings that make up the Tokyo Midtown real estate complex and was the city’s tallest skyscraper until 2014.

The structure was designed by the U.S. firm Skidmore, Owings and Merrill and opened on March 31, 2007. Within the building’s 54 floors, in addition to residential apartments, there are conference rooms, stores, art exhibitions, medical centers, and the Ritz-Carlton Hotel, one of the most luxurious hotels in the world.

Tokyo’s third-highest building belongs to the public sector. The Tokyo Metropolitan Government Building is the seat of the city’s government, which has jurisdiction not only over the 23 city districts, but also over the cities, towns and villages that together make up Greater Tokyo, one of the most populous mega-cities on the planet.

The building consists of a complex of three structures, where the tallest is Number 1, a 48-story tower that houses the city government.

Construction of the skyscraper ended in 1991 and the building held was the city’s highest until 2006, when it was surpassed by the Midtown Tower. A $1 billion investment was required to complete it, and even today the structure is considered a symbol of the city’s power and wealth.

The “city in a city” that brought Valencia into the future