European infrastructure is not safe from climate change either. At first glance the Old World seems less affected by extreme events such as the droughts that have plagued California for years or the hurricanes that cause flooding from Asia to South America. But actually, it is at the centre of profound changes in weather conditions that are causing significant damaging to infrastructure network, particularly transport.

The alarm was sounded a few days ago by a United Nations study that focused on the continent’s transport network. The report, entitled “Climate Change Impacts and Adaptation for International Transport Networks and Nodes” is the result of four years of analysis conducted by a group of experts from the UNECE (the United Nations Economic Commission for Europe).

A recent assessment of how much extreme weather cost European transport systems between 1998 and 2010 amounted to €2.5 billion per year.

It concludes that European infrastructures are at a high risk of damage from climate change, and that European countries should invest hundreds of millions of euros in the short term to modernise the infrastructure network and protect it from this risk.

This is no exaggeration. From rising average temperatures to flooding, from increased rainfall to coastal erosion, climate change is putting a strain on Europe’s infrastructure. Bridges are deteriorating, railways are being deformed by excessive heat, coastal roads are being damaged: all this has a very high cost, first in terms of people’s safety, and then for the economies of the states.

The study calculates that the European Union would have to spend between €38.5 and €135 million every year between 2040-2070 just to renew its road network.

“The adaptation to climate change of transport infrastructure has received very little attention so far and this is precisely what we want to change with this study,” explained UNECE spokesman Jean Rodriguez to Reuters.

“The bulk of the transport infrastructure in the region and in most countries worldwide has been built for the climate of the 20th century and not the extreme weather events that are now scheduled,” said Rodriguez. 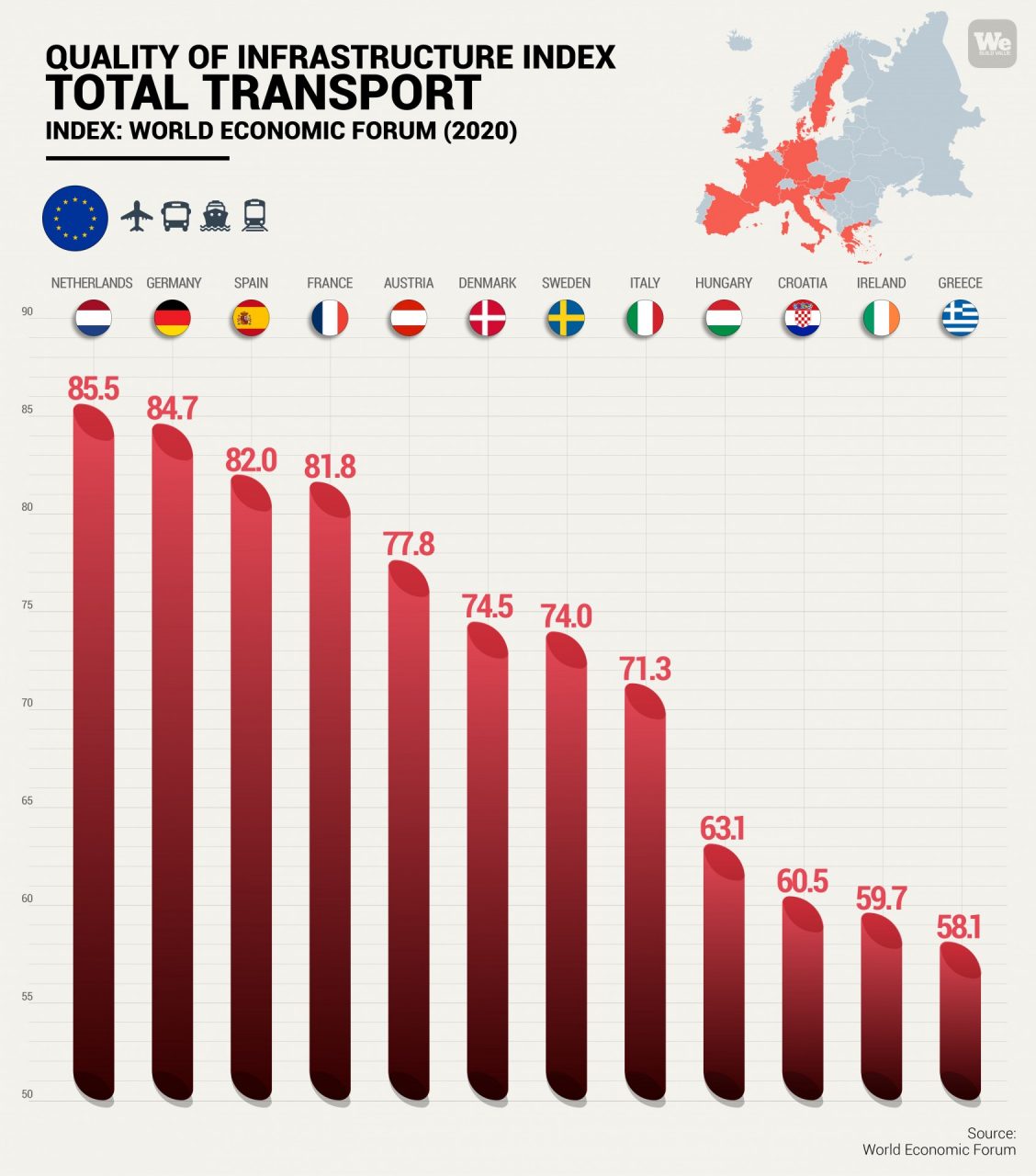 Transportation infrastructure and climate change: the areas most at risk

The United Nations study identifies two types of infrastructure for Europe that are more at risk because they are present in geographical areas most exposed. The first are the ports on the North Sea; the second are the roads and railway lines running near the Mediterranean. In both cases, these are where the more extreme weather situations are located: on the one hand, great cold, the risk of heavy rainfall and flooding; on the other, heat, drought, reduced rainfall and everything that comes with it.

These weather phenomena have an impact on Europe’s infrastructures. If no action is taken, 60% of Europe’s ports risk flooding by 2100, according to a study quoted in the UNECE report.

But if it is true that the more extreme regions of the continent (North and South) are vulnerable to the greatest risk, it is also true that nowhere else is completely sheltered. The study looks at the example of the Rhine River in Germany, near the city of Oberwese. According to scientists’ analysis, by 2030 flooding on that stretch of the river will impact neighbouring roads and railways, with a dramatic effect on transport of people and goods. The daily additional cost to the community of shifting freight from the river to rail would be an estimated €2.5 million.

The UN warning is only the latest in a series of calls for urgent investment to prevent climate change from having a significant impact on the continent’s infrastructure network. The study published by Elsevier’s review “Global Environmental Change“ said that European countries have spent a total of $3.4 billion in recent years on infrastructure interventions. This figure must increase in the future, rising to $9.3 billion this year, $19.6 billion in 2050 and $37 billion in 2080.

Without this financial effort, weather will leave its mark on Europe’s main infrastructure, endangering the well-being and security of millions of people.