Water and roads for Florida, the Sunshine State calls for investments

“On the afternoon of Wednesday, Sept. 28, Hurricane Ian will hit South Florida as hard as it has in a hundred years. The time to prepare is now! Barricade your home, and leave. Evacuate the city.” From the television screens of Channel 8, meteorologist Jeff Berardelli, like his colleagues at other local channels, is mincing no words four days before impact. The warning comes after Florida’s Governor Ron DeSantis declared a state of emergency in 24 counties, more than a third of the total, issuing a map of the most at-risk areas, city by city, starting with Tampa, which appears to be the landfall. Level A and B evacuate immediately, C voluntarily, D and E stay alert for any updates. Of course, A and B are those directly facing the sea on the southern Gulf Coast.

Infrastructure, houses, stores, everything is monitored and classified. Shelters, and refuges, are being set up. Along the roads, it is time to pay attention to Evacuation Route signs, which are always there. But only in these cases do motorists notice them. 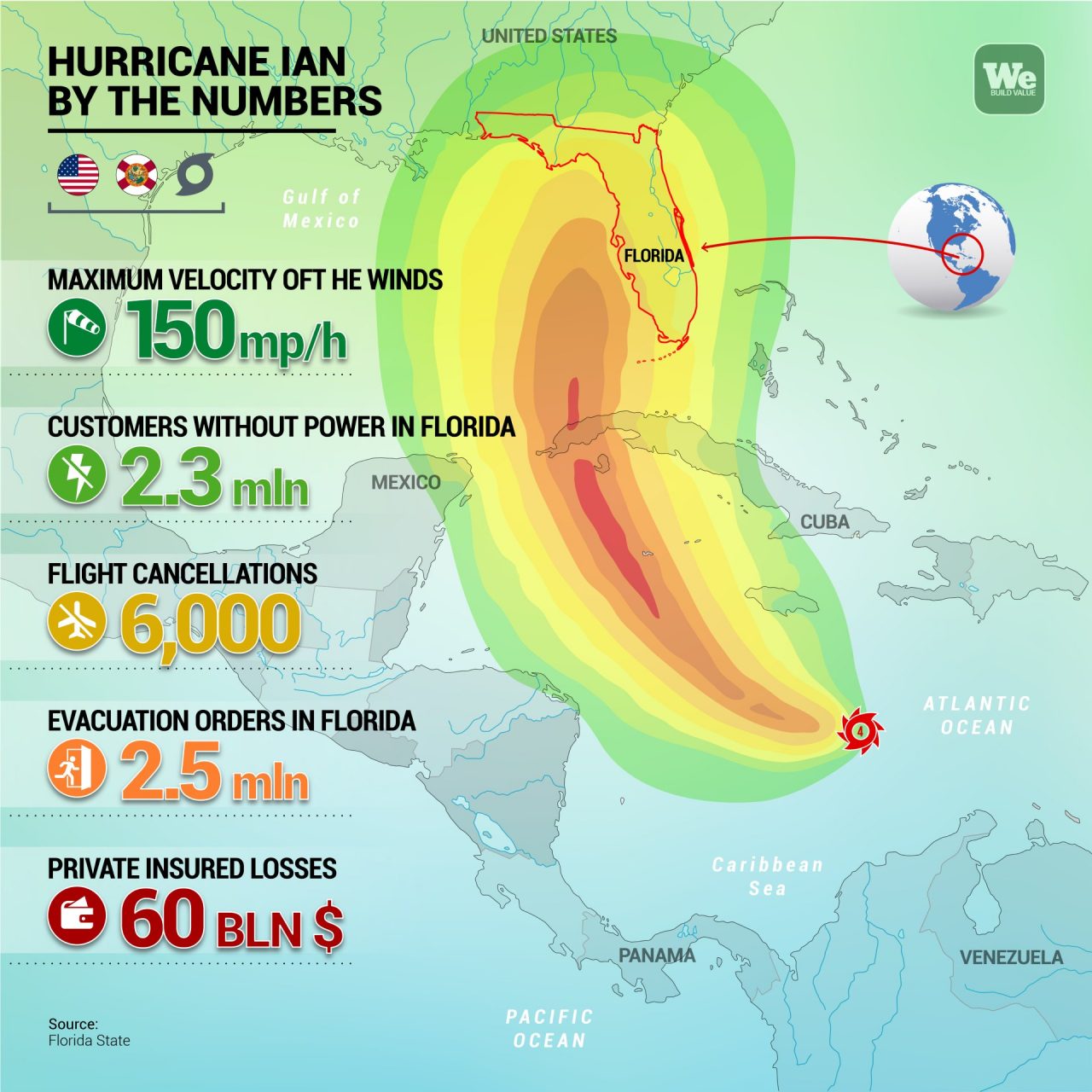 Storms and hurricanes, the stormy September in the Gulf of Mexico.

Atlantic storms typically arrive toward the end of summer. They affect Florida as well as the East Coast, sometimes all the way up to New York; and throughout the Gulf Coast area, from Florida up to Alabama, Louisiana, and Texas. The last hurricane to hit the southern United States hard was Irma in 2017. It too was supposed to make landfall in Tampa, but a final detour deflated it from Hurricane to Tropical Storm, moving it farther south between Marco Island and the Florida Keys. Despite the final loss of power, Irma left behind devastation in the Caribbean islands and Florida totaling $77 billion (€77 billion).

One has to go back to October 20, 1921, one hundred and one years ago, to find a hurricane in Tampa Bay.

While families rush to protect windows, doors, and roofs, the authorities are busy securing utilities and infrastructure. There are worksites to protect, electrical poles to check, stormwater drains to clear of debris, and a thousand other tasks, all critical to reducing damage, protecting residents, and ensuring services. Just outside that Home Depot store, trucks from the power company are busy on the I-75 overpass near Lakewood Ranch.  They are arriving by the hundreds from other states, particularly super-experienced teams from Kentucky, to bolster relief efforts in hurricane areas, because power outages are inevitable and delays in restoring service are high on the list of fears of people and businesses, along with the street closures due to road flooding, falling trees, and wind damage.

The Florida Department of Transportation (FDOT) points out that contractors on all active projects, including the various road construction sites in the Tampa area where Lane (Webuild) operates, “have been securing construction sites, suspending all traffic control devices that are not being actively used to direct traffic, and monitoring drainage systems.” To facilitate evacuation, tolls are suspended, along with weight restrictions on commercial vehicles carrying fuel, emergency equipment, and agricultural and citrus products.

Law enforcement and maintenance crews, having inspected roads and bridges, are ready to monitor the post-hurricane situation. Meanwhile, the Coast Guard has been monitoring the anchoring of movable bridges, the tightness of boats and storage facilities.

The Florida Department of Environmental Protection (DEP) is working to expedite the necessary repair, replacement and restoration of surface water management systems, works and other infrastructure threatened by Ian. Each department is preparing for the emergency with detailed plans. Schools are closing, at least until Friday, September 30. The telecommunications division is in close contact with telecom management companies. The emergency department has five search and rescue teams standing ready for possible flood victims, and has 360 trailers ready with over two million meals and over a million gallons of water. Hospitals can count on another 300 ambulances that have arrived from non-hurricane-prone areas.

On the morning of Tuesday, Sept. 27, DeSantis reads the bulletin, broadcast on all television and social media channels, from Twitter to Facebook. The hurricane is about 50 miles wide, twice as wide as Charlie, which devastated this part of Florida in 2004. But it is moving southward from Tampa toward the Fort Myers area. It’s a Category 4, increasing to 5, with winds of 150-155 miles per hour (over 240 mph). All bridges across the sea are being closed. Even the iconic Sunshine Skyway Bridge is closed. “This is a solid infrastructure, built well. We have checked them all. We don’t fear for the infrastructure itself, but the wind is too strong to ensure that the vehicles are sealed,” the governor announced. The hurricane is a source of gusts, tornadoes and unpredictable eddies. “We can control everything, and we are, but we cannot stop Mother Nature,” DeSantis cautions, still urging people to take shelter. The administration has also made arrangements with insurance companies and federal agencies to provide compensation for damages, but “to safeguard people, we need everyone to do their part and avoid unnecessary risks,” the state government’s spokesman echoes.

At 5 p.m. Tuesday, Tampa Airport closes its airspace. “The airport is a critical infrastructure of the state, we have taken all necessary measures to protect it,” CEO Joe Lopano explains in a press conference. “In agreement with the airlines, we have moved the airplanes to safer areas, we have cleared the runways of any possible objects that could pose a danger due to wind and water, which is the biggest concern given the proximity of the runways to the sea.”

At 3:05 p.m. on Wednesday afternoon, Sept. 28, Ian slams into 155-mile-per-hour winds, just below Category 5, on Cayo Costa, a pearl among the Gulf islets in the reef opposite Fort Myers. Ian breaks in the exact same spot where Charlie had entered in August 2004. Throughout the rest of the afternoon and the following night, with the fury of the wind and the force of the water, tens of thousands of people prepare for the aftermath of Ian, when they will need to rescue people in distress, search for missing persons, tally casualties (as many as 100 as of October 5) restore basic services, and check infrastructure. Private donations start to pour in, and federal and state aid is activated.

As Ian’s fury moves to the coasts of South and North Carolina, as of Thursday, Sept. 29, bridges and airports in Florida reopen. Now is the time to draw conclusions about the resilience of infrastructure and the organisation of teams on the ground, including employees and volunteers. “The response of people and the resilience of infrastructure has been impressive in the face of the 500-year flood experience,” the governor says at a press conference.

Since 1953, the National Hurricane Center (NHC) has been naming Atlantic hurricanes and tropical storms according to a list approved by the World Meteorological Organization. The list, consisting of 21 names, is repeated every six years. “The only time there is a change in the list,” the NHC explains, “is if a storm has caused such damage and casualties that future use of its name would be inappropriate for sensitivity reasons. Ian, like Charlie or Irma, has already been delisted.

The London Underground in service to the Queen

From Genoa to Algeciras, breakwaters play a strategic role