Atlanta: a transportation plan to remain the USA’s main hub Light rail lines, bus lanes, highways and road connections, subways. The future of Atlanta seems to depend on mobility. Sustainable, first of all, but also efficient, and above all modern.

The capital of Georgia, the ninth-largest metropolitan area in the United States (with nearly 5.7 million inhabitants), is a national strategic hub for transport and its Hartsfield-Jackson International Airport is the world’s busiest airport in terms of passenger traffic, as well as the busiest in the United States.

The city’s role as a transport hub is so crucial that the Atlanta Regional Commission has updated its Regional Transport Plan 2020, expected to be approved in February 2020. According to the plan, the city will be at the center of a series of projects for a total value of $172.6 billion over the next 30 years. It aims to be ready for 2050, when 2.9 million more people are expected to live there than they do today.

The Atlanta Regional Transport Plan was designed specifically to modernise the city’s rail and road transport network. The plan already provides for federal, state and local investments for $33 billion to be spent over the next six years.
However, the main focus of the programme launched by the Atlanta Regional Commission is to maintain and modernise existing infrastructure. Out of the total $172.6 billion, almost 60% ($102 billion) will be spent on fixing existing infrastructures. The rest will be allocated for new construction projects, with particular attention on modern technologies inspired by the design of smart cities.

«Transportation has long been the engine driving metro Atlanta’s economy», writes Doug Hooker, Executive Director of the Atlanta Regional Commission, in the report. «We were founded as a railroad hub. And our extensive highway network, efficient heavy rail system, and world-class airport transformed metro Atlanta into one of the nation’s largest, most dynamic places».

The main projects in the pipeline

The goal of the thirty-year plan put together by the Atlanta Regional Commission is to reduce congestion in order to improve the quality of life for residents. The city’s forecasted population increase makes infrastructure investment even more urgent. In its list of priorities, the Atlanta Regional Commission has included the construction of light metro lines that will cross the city, in particular by connecting to Atlanta BeltLine and Clifton Corridor; the creation of new routes for rapid transit buses and the expansion of existing ones; the replacement of some road corridors; and many connections with the major highways that lead from the region to the city. In all, 215 road arteries will be expanded.

A portion of the funds ($10 billion) will be used to reduce congestion achieved through a radical change in the way people commute to work. The city will promote the use of bicycles, car sharing and teleworking, as well as investing in increasing the cultural, recreational and social services available in individual neighborhoods to push people to concentrate many of their ordinary activities nearer to their homes.
On the whole, therefore, the plan goes beyond building new roads to encompass a project to renew the city’s habits and culture, based on greater sustainability. 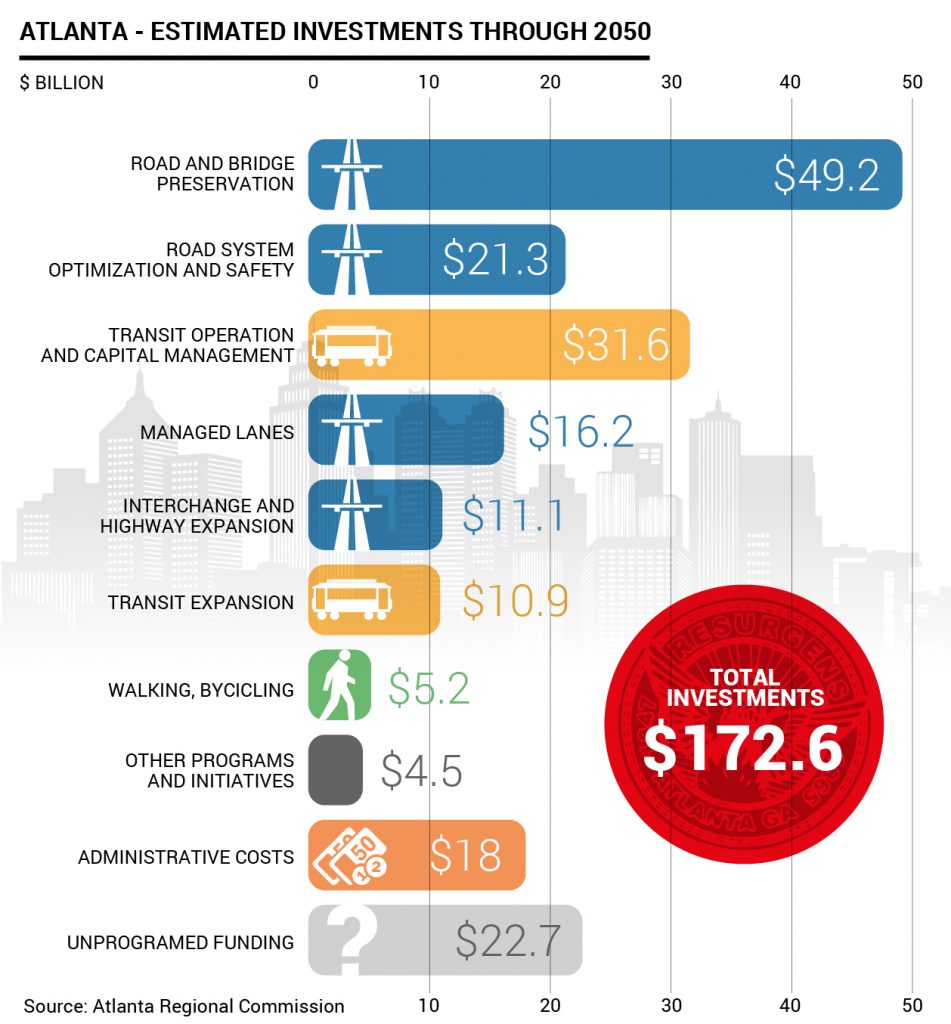 Atlanta’s infrastructure development plan not only aims to equip the metropolitan area with new infrastructure and habits. Above all, its goal is to support the process of economic growth and social development.
According to the Atlanta Regional Commission, the city’s growth will gather speed in the coming years. The area will add 1.2 million more jobs by 2050, for a total of 4.7 million employed, the Commission said in forecasts released in October. Construction will be the second-largest growing sector after health, adding some 131,000 jobs.

Furthermore, investment in transport infrastructure means supporting the economically most productive parts of the city. According to Executive Director Doug Hooker, Atlanta is one of the leading intermodal transportation centers in the United States. The Atlanta Regional Commission says that in 2018 the wealth produced by the freight-dependent sector reached $514.8 billion, of 38% of the regional total, and will reach $1.2 trillion by 2050.
Supporting transport, therefore, means not only improving the quality of life, but also adding new fuel to the engine of the city’s economy.

NYC: the secrets of its famous subway map