Across the major metropolitan areas of the United States, Covid-19 seems to yesterday’s topic of conversation. The massive U.S. vaccination campaign has already far surpassed its initial goal of 100 million shots administered, allowing the country and U.S. President Joe Biden’s administration to start looking ahead.

And it does through three strategic investment tools, designed with different aims and objectives, but all essential to restarting the country’s economy, in many cases supporting the development of infrastructures.

The first is the Build Back Better, a massive $4 trillion (€3.4 trillion) investment plan promised by Biden during his campaign and recently unveiled by the U.S. President in Pittsburgh. The plan includes an initial allocation of $2 trillion (€1.7 trillion) that will be doubled in the coming months. Such a large figure has never been seen before in American history, and according to the Biden Administration’s plans will be spent  over a ten-year time span.

The plan, also called the “American Jobs Plan,” aims to create new jobs and support economic recovery, and will be partly financed by an increase in taxes on businesses and higher incomes. This ambitious plan is not all that the new U.S. administration intends to do to put the Covid-19 crisis behind it once and for all. 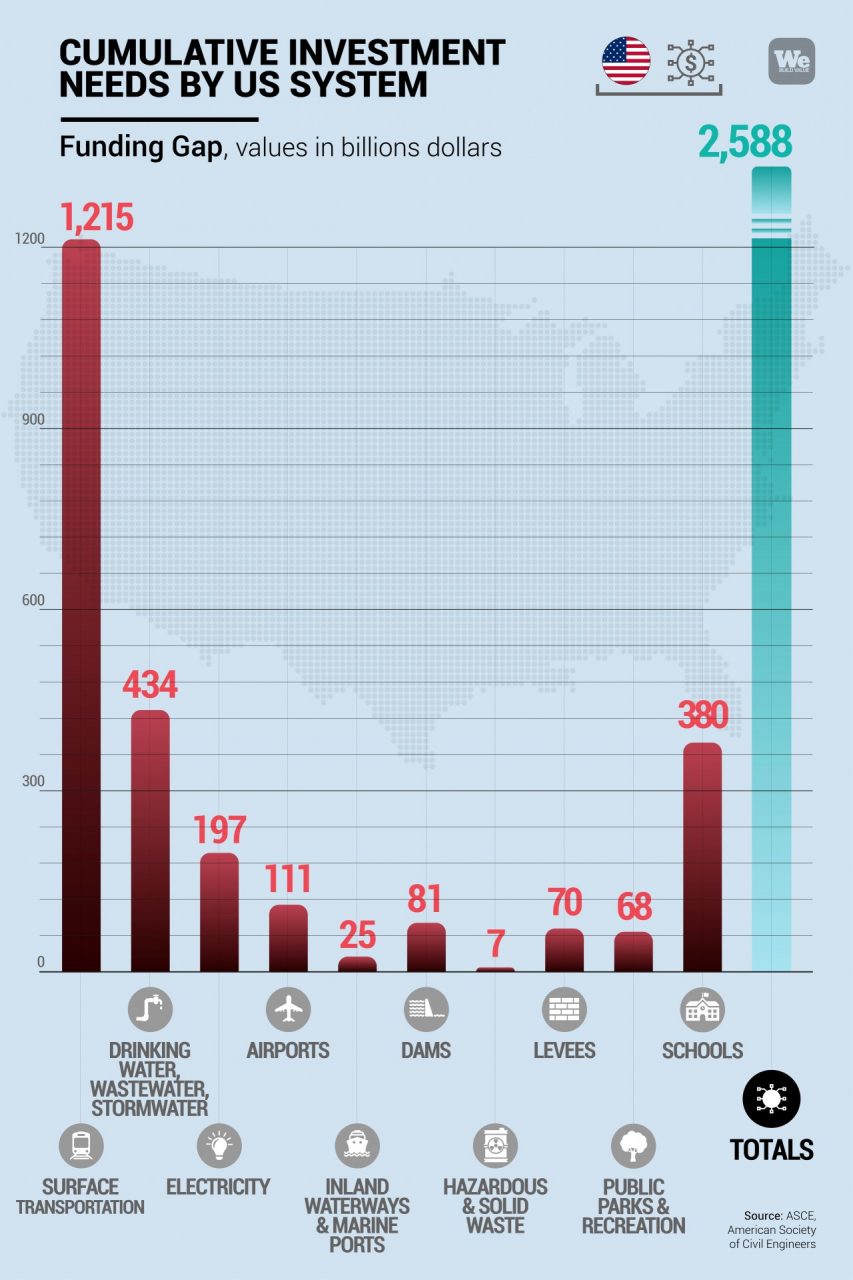 Protecting the weakest: the goal of the American Rescue Plan

Both in the short and long term, the future will be about protecting the population segments most affected by the pandemic and aiding in economic recovery. To that end, Biden also recently presented the direct $1.9 trillion (€1.6 trillion) stimulus contained in the American Rescue Plan Act to Congress, which paved the way for Build Back Better. The economic stimulus plan is multifaceted and will introduce measures for businesses, but it also takes aim at social issues, including income support and investments in health, education, and safety.

Funds will then be allocated state by state based on population, the percentage of population living in rural areas, and the number of people living below the poverty level. Those with the highest need will receive more.

Infrastructure and investment in large-scale works will play a key role in this comprehensive plan to restart the country. Looking to this sector will be strategically advantageous, both by creating new jobs and by reactivating the economy through modernizing America’s infrastructural network.

A substantial portion of the fund’s total endowment will be invested in infrastructure. Approximately $126 billion (€106 billion) will be allocated to elementary and secondary schools, including to their maintenance and construction; $30.5 billion (€25.8 billion) will go to transit agencies; and $8.5 billion (€7.2 billion) to rural hospitals and health care facilities.

America's expectations for the FAST Act

Along with the American Rescue Plan and Build Back Better, a third stimulus package is expected in September, when the new FAST Act (Fixing America’s Surface Transportation Act) is expected to be finalized and approved. This plan will refinance the large federal fund set up to modernize the nation’s surface transportation network.

The FAST Act is a funding and authorisation bill first introduced by former President Barack Obama, aiming to accelerate redevelopment of America’s transport infrastructure. The first act, which passed in both the House and the Senate on Dec. 3, 2015, called for a $305 billion (€258.8 billion) investment to be spent over five years in strategic areas. Chief among these were the highway network and sustainable mobility, both within major cities and in city-to-city and state-to-state connections.

On October 1, 2020, the Senate approved a one-year extension of the FAST Act, appropriating an additional $13.6 billion (€11.5 billion) for the Highway Trust Fund to be spent in fiscal year 2021. Now, however, America’s infrastructure sector is looking ahead to September, when the plan will be renewed and revamped for the next five years.

On March 1, the Congressional Research Service drew up a report focused on the refinancing of the FAST Act, reiterating the need to refinance the fund as soon as possible.

The updated FAST Act will be presented to Congress in September 2021, but technicians, led by the new Secretary of Transportation, Pete Buttigieg, are already at work.

ASCE (American Society of Civil Engineers) calculates that a lack of investment in the infrastructure sector would result in an unrealized potential of 3.9 million jobs by 2039, and a drop of $2.4 trillion (€2.04 trillion) in exports over the next twenty years.

This is the danger that today the US Administration is trying to avert, with three massive stimulus packages that will contribute to a massive renewal of the American infrastructure network.