From Washington D.C. to Los Angeles, public infrastructure worksites get up and running to take advantage of Covid-19 lockdown calm

While Covid-19 continues to make its impact on the U.S. economy felt, individual states are reacting by finding ways to exploit the US lockdown as an opportunity to move their projects forward and to push ahead with much-needed modernisation of aging infrastructure.

These states are continuing to spend on infrastructure while waiting for the U.S. Congress to give the green light for the promised infrastructure spending package of about $2 trillion.

As McKinsey & Company said in a recent report called “Reimagining infrastructure in the United States: How to build better,” this spending is a crucial considering the beneficial impact that investments in the sector have on the U.S. economy. In 2015, the Congressional Budget Office estimated that every dollar spent in the U.S. on transport infrastructure brings an economic benefit of up to $2.2. Similarly, the U.S. Council of Economic Advisers has calculated that an investment of $1 billion in transport infrastructure corresponds to the creation of 13,000 jobs.

The cost of old infrastructure

In addition to the positive impact that modern infrastructure has on both quality of life and the economy, it also reduces the high cost of outdated works.

McKinsey’s analysis points out the economic cost stemming from particularly old infrastructure in the U.S. For example, it cited calculations by the Regional Plan Association that damage to the railway tunnel that runs under the Hudson River in New York City (now 111 years old) could cost the economy $16 billion over four years, or the equivalent of 33,000 jobs. It is not surprising, then, that the American Society of Civil Engineers calculates the country’s infrastructure gap at $2.1 trillion.

All this can be easily explained by data from the federal government: in 2017 public spending on infrastructure reached its lowest level in history, equal to 2.3% of GDP.

Investing therefore is fundamental to modernise infrastructure, and also to support employment. McKinsey estimates that completely closing the infrastructure gap could translate into a 1.2% increase in U.S. jobs (qui ho tolto la cifra del 10 millioni, non è chiaro a che cosa si riferisce). No wonder that many states have begun to take advantage of this particular moment in history to anticipate infrastructure projects planned for 2021 without waiting for federal funds. 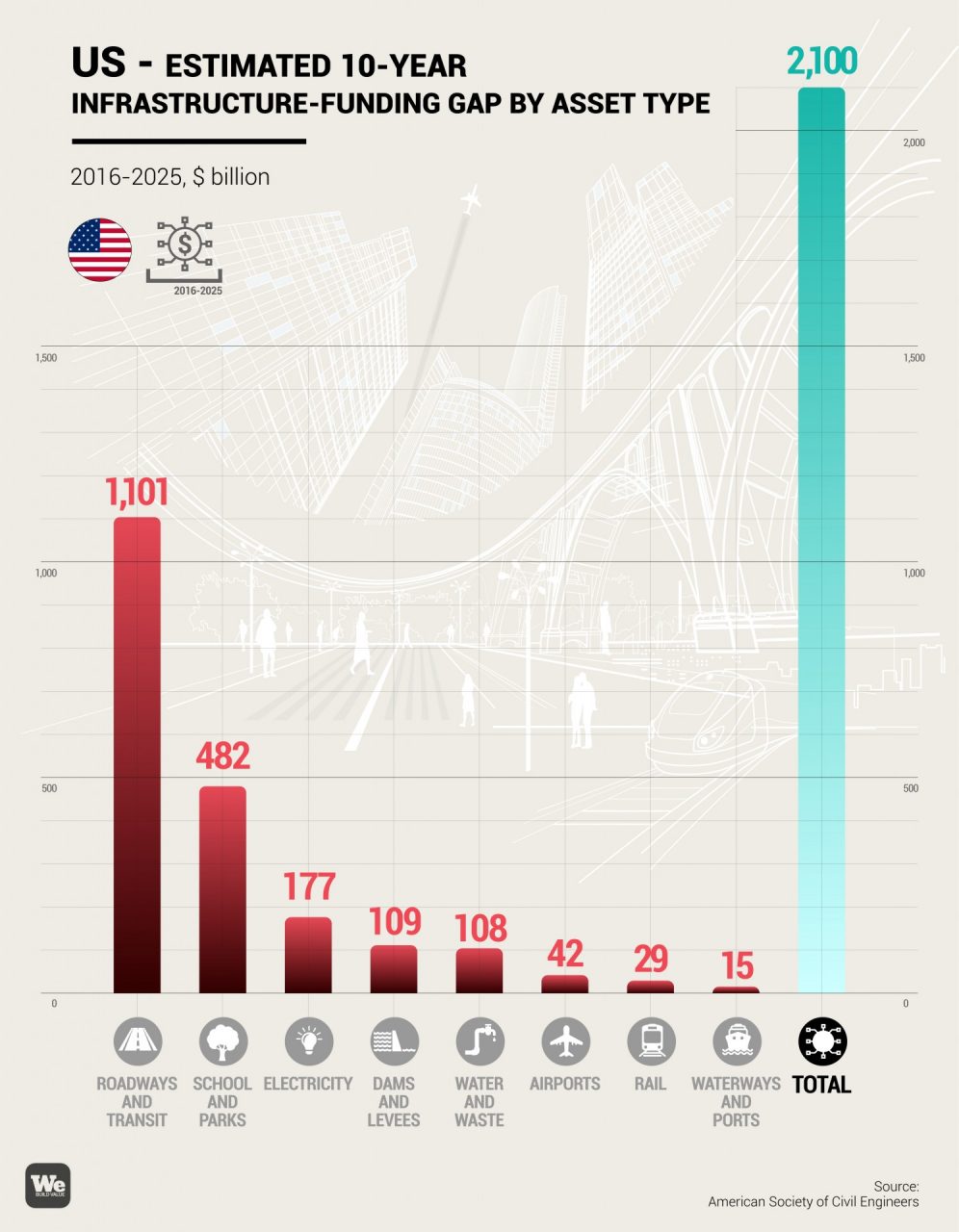 U.S. lockdown and impact on airports

McKinsey’s analysis highlights the impact that the Covid-19 crisis has had on air traffic, saying the number of passengers at U.S. airports in recent months compared to 2019 has fallen by 95% and is not expected to return to previous levels before 2021.

Currently, the government has allocated $10 billion to airports through the CARES Act, but it is still not enough to rethink the functionality and modernise some of the country’s oldest airports.

Paradoxically, precisely this period of reduced traffic would be perfect to invest in airport development projects. The Denver International Airport, for example, is taking advantage of reduced passenger traffic and in recent weeks has opened several construction sites for a long-planned renovation of its terminals.

Invest today to reap the return on the investment tomorrow. This is the necessary choice across all infrastructural sectors.

The mass transport sector has also seen a collapse of users. In major American cities, New York, San Francisco, Chicago, the number of people taking subways and buses fell by 90% compared to the same period last year. The impact of Covid-19 lockdown and social distancing has changed the needs and habits of millions of people in the United States.

To protect the public transport sector, the government’s CARES Act has allocated funds of $25 billion, which helps plug lost revenue hole in operating budgets, but does not meet the longterm spending gap needed to modernise networks, trains and buses to allow for increasingly sustainable mobility.

As in the case of airports, this historic moment could also be used to renew city transport networks. The Washington Metropolitan Area Transportation Authority, for example, has moved forward a series for works planned for 2021 to this summer. These include the modernisation of the city’s subway stations.

In Los Angeles, too, the Beverly Hills City Council took advantage of reduced traffic flows to close Wilshire Boulevard in order to speed up the expansion of the Metro Purple Line, one of the city’s strategic subway lines.

Roads and bridges: the US lockdown as an opportunity for renewal

The impact of Covid-19 on the coffers of the local Departments of transportation (DOTs), which are responsible for managing the country’s road and bridge network, will be mainly related to the reduction in revenue from fuel taxes and motorway tolls.

Despite the reduction in available funds, roads and bridges are one of the most critical areas due to the old age of both the motorway network and the many bridges spread throughout the country. Again, there are several examples of local governments accelerating their infrastructure spending plans by exploiting the Coronavirus lockdown in U.S.

In San Francisco, the California Department of Transportation (Caltrans) moved the procedures forward to replace the U.S. Highway 101 deck from July to April.

The pandemic has hit the economy, work and life habits hard, but those who have been able to get organised are managing to take advantage of an historic moment – to be ready to reap the benefits of economic recovery when it arrives.

Progetto Italia moves ahead: Webuild ready to invest in Astaldi