From the Sydney Harbour Bridge to the new subway, the city’s race to modernity

Few people are aware that the Australian flags fluttering atop the Sydney Harbour Bridge are replaced every four to six months. This is just one of the many routine maintenance tasks handled each day by a staff of 100 people. They are responsible for protecting both the beauty and operation of the famous bridge, which has become a symbol of Sydney and of Australia around the world.

Ever since its inauguration in 1932, this iconic arched bridge connecting the central business district with the North Shore has changed along with its city, the capital of New South Wales. Back when it opened, daily traffic on its six original lanes was 11,000 vehicles. Today that number has risen to 160,000. According to Guinness World Records, it is the world’s widest long-span bridge and it is tallest steel arch bridge.

The bridge has not only marked the history of the city; it established new aesthetic and functional parameters for the construction industry, and was deemed an International Historic Civil Engineering Landmark in 1988.

Since then Sydney has changed. It has become a modern capital thanks to the new and ambitious Sydney Metro project that is revolutionizing the city’s mobility. And its famous bridge has remained at the service of the city’s development.

Sydney Harbour Bridge: over one hundred years in the making

The first plans to build a bridge in Sydney Harbour date back as far as 1815. But for a variety of reasons, the final project for the construction of the bridge was not approved until the 20th century.

John Bradfield submitted a proposal for the bridge in 1912, and was appointed Chief Engineer of Sydney Harbour Bridge and Metropolitan Railway Construction in 1914, and a bill approving construction for a bridge of a different design was passed in 1916 by the New South Wales Legislative Assembly. But it was blocked by the state Legislative Council during World War I so that the country could focus its economic resources to support the war effort.

At the end of the war, Bradfield resumed work and in 1921 presented a new plan for an arched bridge. Both Bradfield and the NSW Department of Public Works used the Hell Gate Bridge in New York City as a basis for a reformulated Sydney Bridge design. On 24 March 1922 the construction contract was awarded to an English company, Dorman Long and Co Ltd, because it had already worked on such bridges in the past.

With the city’s first underground railway construction underway, the bridge was designed to accommodate rail traffic. The final version of the Sydney Harbour Bridge therefore had six lanes for road traffic, two for railway lines and one pedestrian footpath. 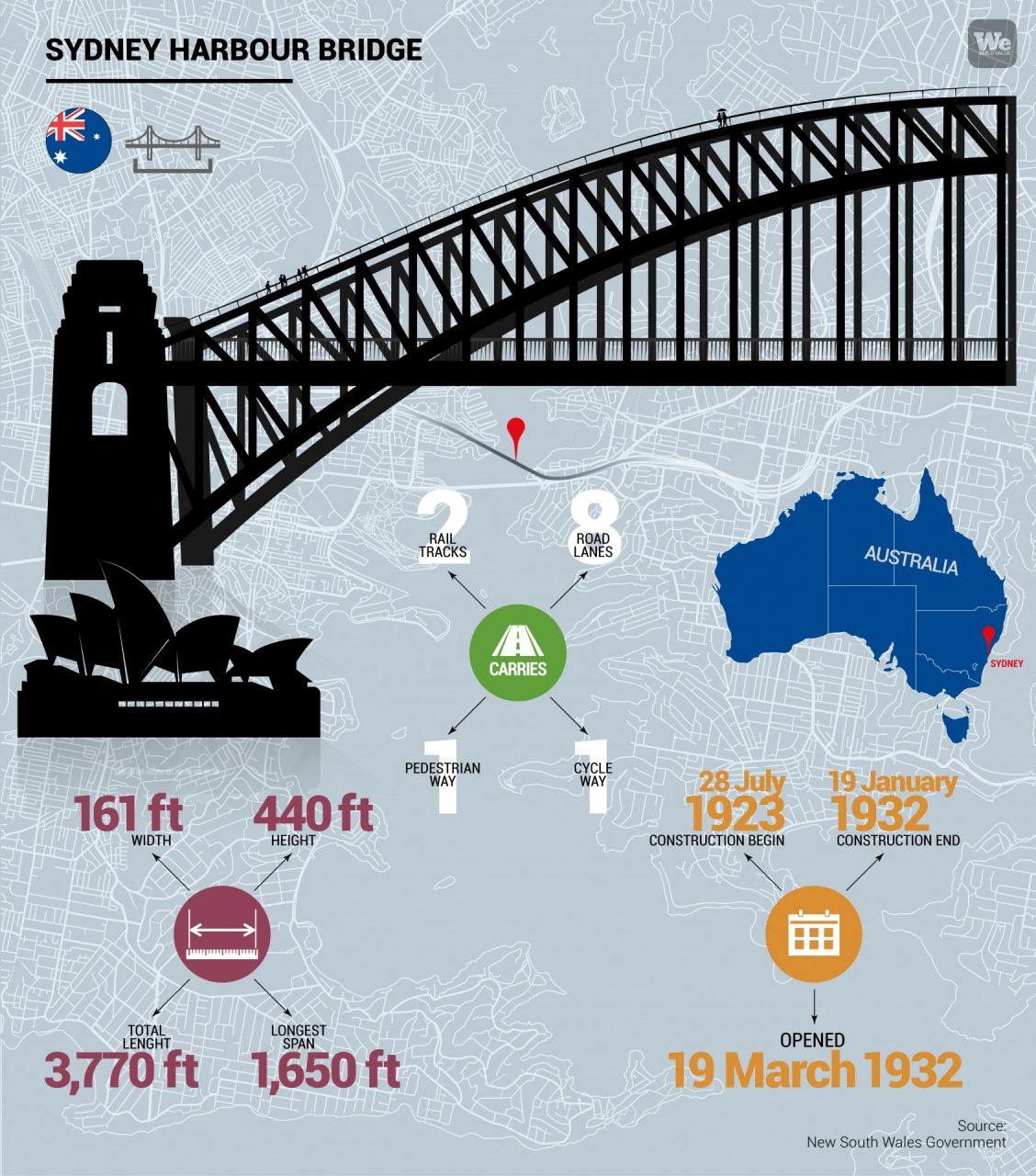 The construction of Sydney Harbour Bridge

Construction of the bridge kicked off with the laying of the first stone 28 July 1923, under the supervision of Bradfield who continued to oversee it until the end. First came the laying of the foundations, and work on the arch began on 26 October 1928. The construction of the arch started from either side, although the work on the southern side went slightly in advance to check for construction errors and not to repeat them on the other side.

The two sides of the bridge finally met on 19 August 1930, which was a day of celebration for the entire city. At that point the roadworks began: the span was completed in June 1931, when all the gas, power, water, and telephone lines were also set up. The first test was on 19 January 1932 and two months later, on 19 March, the bridge was opened to the public.

The Premier of New South Wales Jack Lang declared the bridge’s inauguration day a holiday. Hundreds of thousands of people flocked to admire the new bridge, making the celebration the largest public events in the city’s history.

The resulting infrastructure is an essential part of the city’s life, as well as being beautiful. It immediately became a symbol of Sydney around the world.

Bradfield, the subway, and the modern Skytrain

A continuous line connects the story of John Bradfield, Chief Engineer of Sydney Harbour Bridge and Metropolitan Railway Construction, with Sydney Metro and the city’s modern evolution — which got a huge boost from the Sydney Metro project still underway.

On the city’s streets, people still call Bradfield “the father of modern Sydney” today because along with the famous arched bridge, the engineer — born on 26 December 1867 in Sandgate, Queensland – also designed and supported the city’s first subway line.

After the bridge project was approved, the engineer set to work on a new urban transport system that could support the city’s demographic development. In 1915 he proposed an electric subway. The project was temporarily blocked during World War I, but was approved at the end of the war, and the first stations opened in 1926. The Sydney Metro has become one of the most modern and technologically-advanced subway networks in the world.

The Sydney Metro is the natural evolution of this vision. This ambitious design for a new metro network is partly already completed. The Webuild Group (Salini Impregilo) has been commissioned to build the so-called Skytrain Bridge on the Sydney Metro Northwest line, a viaduct 4 kilometres (2.8 miles) long and a curved, cable-stayed bridge measuring 270 metres (885 feet). The finished bridge has been awarded the “2018 Project of the Year” award by Engineering News-Record magazine, as well as being included by the Infrastructure Sustainability Council of Australia in the “World Class Best Practice” category in terms of sustainability.

The Sultan’s bridge that changed Istanbul