The Sultan’s bridge that changed Istanbul

The Fatih Sultan Mehmet Bridge was inaugurated in 1988, accelerating the modernisation of the Turkish capital

Genoa and hundreds of other bridges

Recycling Wastewater in Turkey: a plan to fight drought

Legend has it that the first person to cross the Bosphorus, the channel of water that creates a natural border between Europe and Asia, was Io, one of Zeus’ lovers, transformed into a heifer and forced to swim away from the wrath of Hera.

From the foundation of Constantinople in 330 B.C. to the present day, the Bosphorus Strait between the Black Sea and the Mediterranean has always been a strategic point for the exchange of men and goods. It became even more important as Istanbul developed into one of the world’s great capitals.

To meet this need, bridges were finally built in the last century to connect the shores of the two continents, uniting otherwise distant regions and accelerating the growth of the centuries-old trade routes between Europe and Asia.

The Fatih Sultan Mehmet Bridge, the second bridge across the Bosphorus (built by Salini Impregilo, WeBuild, between 1985 and 1988) is still an essential tool today in the Turkish capital’s economic modernization, as well as for the entire region. This infrastructure work was unique for its historical moment.

Looking out at dusk from the Galata Bridge, where fishermen and tourists flock to the Ortaköy district on the European side of the Bosphorus, Istanbul’s lights illuminate the Straight and the hustle and bustle of cars seems denser than ever.

Major bridges are not just tools to shorten travel times between two sides of a city; they are arteries that connect distant regions. The work carried out by Salini Impregilo (WeBuild) goes beyond the Fatih Sultan Mehmet Bridge, connecting to a 247 km (153-mile) long motorway that links the city of Kinali, in Europe, with that of Kazanci, in Asia.

This makes the project into a transformative infrastructure which, over the years, has helped to support the development of the Turkish capital.

In the 1970s Istanbul had 2 million inhabitants, while today it numbers over 13 million. Over the last 50 years the wealth produced in the city has increased by an annual average of 4.5% and the city’s economy accounts for 40% of the national GDP.

The second bridge over the Bosphorus has played a role in the city’s development, boosting trade between the European and Asian shores by 31.8% in the seven years after its opening.

Since then, the value and scope of this work has not changed. More than 30 years after its inauguration, the Fatih Sultan Mehmet Bridge is still considered one of the most beautiful and functional in the world. Its shape, its characteristics, and the magic of the place where it stands have done the rest, transforming an infrastructure work into a monument of human progress. 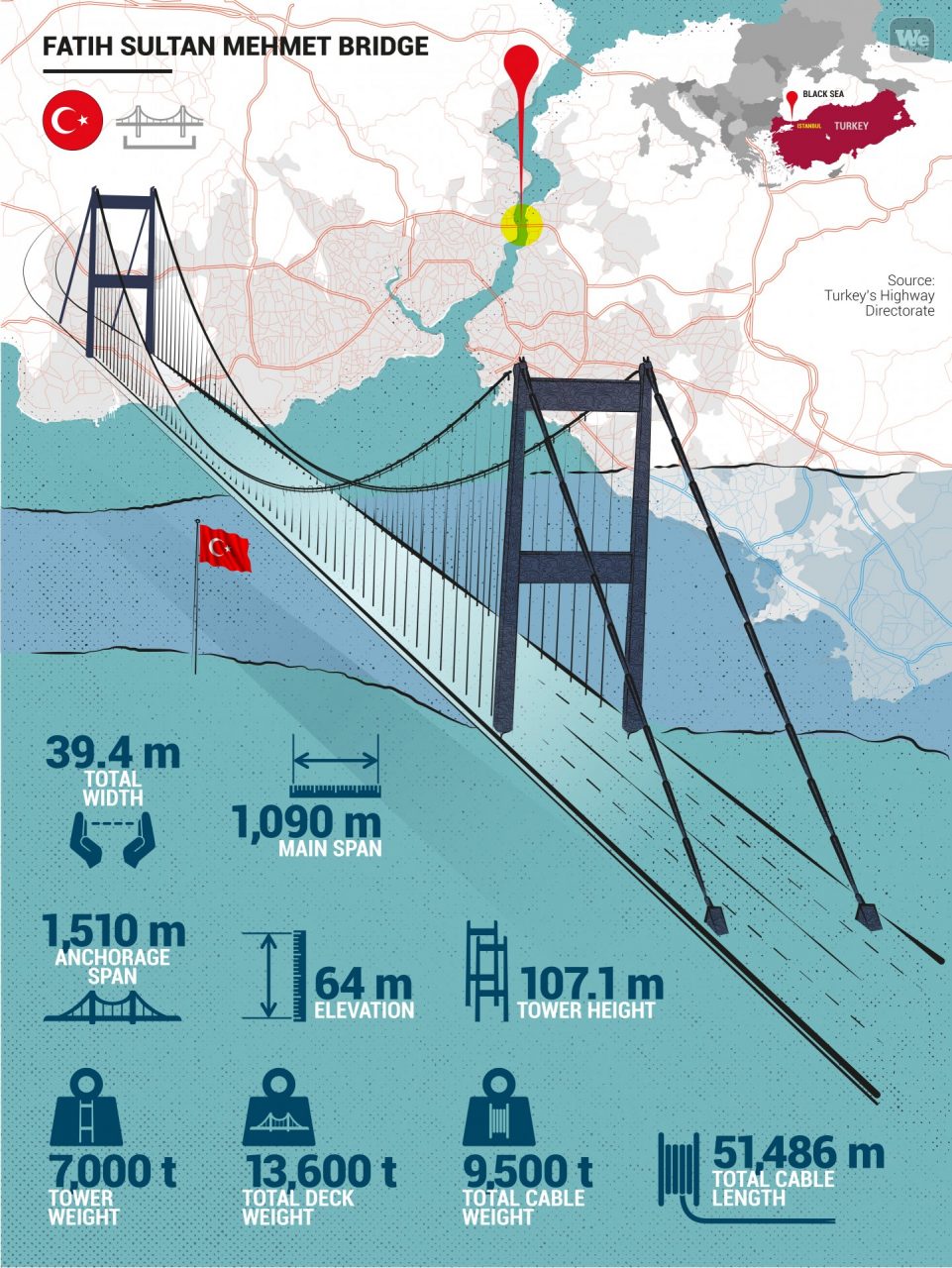 Innovation and grandeur: facts about the Fatih Sultan Mehmet Bridge

The Second Bosphorus Bridge was designed to meet an urgent need. In the 1980s, Istanbul was undergoing a profound transformation and the capacity of the first bridge, built in 1973, was no longer sufficient to meet the city’s transport demand.

Hence the decision to build a second bridge over the Bosphorus, one that for its size and capacity could speed up exchanges between the two sides of the Strait.

Like the first bridge over the Bosphorus, the Sultan’s Bridge was built to withstand the region’s frequent earthquakes. The span, 3 metres (9.8 feet) thick and 39.4 metres (129 feet) wide, is made of steel and built precisely so that it can be flexible in case of seismic stress.

All in all, a great engineering work, carried out in a very short period of time. Construction began on 4 December 1985, the first part of the bridge was completed on 17 September 1987, and work ended on 4 February 1988. It was finished 192 days ahead of schedule.

A major infrastructure for the development of Turkey

Every day around 200,000 vehicles cross the second bridge over the Bosphorus. This number is on par with the large bridges in New York City, and demonstrates the strategic importance of this infrastructure for the economic development of Istanbul.

According to data from Turkey’s Highways Directorate, the bridge has generated toll receipts of $1.8 billion since its inauguration in 1988, and a total of 847 million vehicles have crossed it.

The Fatih Sultan Mehmet Bridge has responded to the ancient need to join two banks of the Bosphorus, in an area which had been totally isolated before the bridge was built. The bridge connects the Hisarüstü District on the European side with the Kavacık District on the Asian side.

The bridge has remained a strategic infrastructure for Turkey, and maintenance work has continued so that its functionality was never compromised. A resurfacing of the bridge in 2019 was financed by the Turkish Ministry of Transport and Infrastructure, and was completed on 27 June when, at 6 p.m., its eight lanes were opened again to traffic. To complete the two four-lane carriageways, the workers toiled day and night, seven days a week, to finish an essential job for Istanbul and Turkey.