Investments in sustainable mobility for the capital of New South Wales

When in the future it is seen from the rooftop terrace of the just-unveiled design for the Pencil Tower Hotel – a “skinny” building that will be 110 metres (360 feet) high and just 6 metres (19 feet) wide — Sydney will be a metropolis in motion. The view will sweep along the southern edge of the Central business district and its subway lines and sparkling new roadways, which are the face of a city that focuses on sustainability and infrastructure as the key to its development.

In the capital of New South Wales, one of Australia’s most vibrant and iconic cities, Covid-19 has slowed growth and crimped the capacity for movement, but there is no stopping Sydney’s development projects or ambitions. In the northern part of the city, plans for a new skyscraper at 110 Walker Street were just announced. It calls for an investment worth AUD 500 million (USD380 million) and is designed to house the headquarters of several of the banks based in the city once the pandemic has passed.

But it’s not just skyscrapers and real estate redevelopment that will mark Sydney’s future. The city is focusing on sustainable mobility to reorganise its transport network: the city’s map is being redesigned around light rail, subways, and regional railways to improve the quality of life, attract private investment and support economic recovery.

This explains why the federal government together with the government of New South Wales are supporting the development of what has been called the largest transport plan ever created in Australian history. A total investment of AUD41.4 billion (USD31.4 billion) to be allocated for major projects over a period of four years to modernise the network in the name of sustainable mobility. On top of this are investments announced in recent months, with the aim of helping the city recover from Covid-19 and improve the capital of New South Wales with “productivity-enhancing infrastructure have helped make NSW the best-performing economy in Australia,” the state’s government says.

The Western quadrant of Sydney will soon be an open-air construction site. The Australian federal government together with the government of New South Wales are investing AUD4.1 billion (USD3.1 billion) to be spent over the next ten years on the Western Sydney Infrastructure Plan, an area where population growth is concentrated. The plan aims to upgrade existing road infrastructure to reduce congestion, thereby reduce travel times and emissions in the city center.

The government calculated that 4,000 new direct and indirect jobs will be created over the life of the plan, many of them in road works such as the construction of the Northern Road highway or the completely of the M12 Motorway.

The cherry on the cake will be the inauguration of Western Sydney International Airport in 2026. 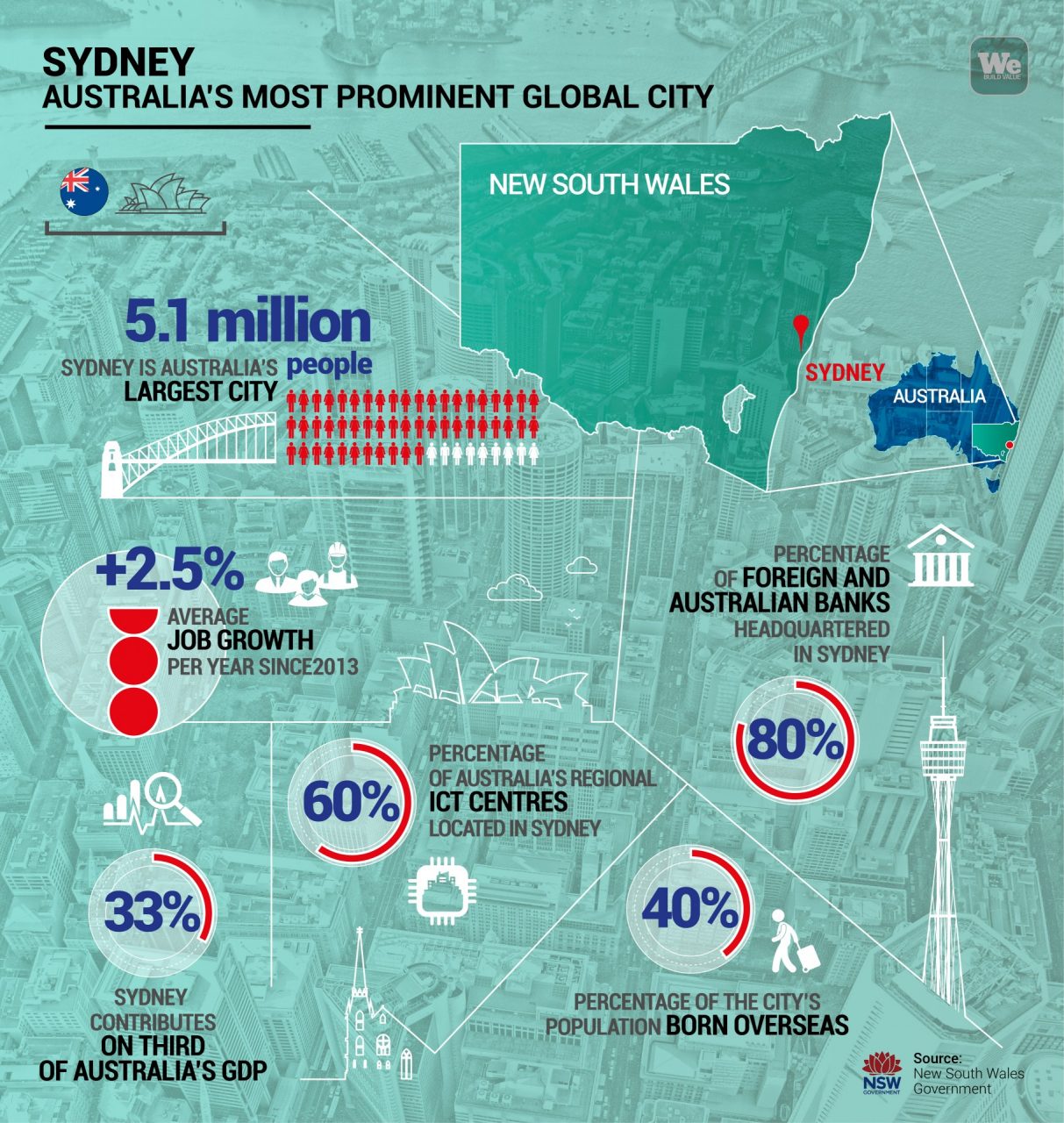 A massive push in light rail and Sydney Metro

The story of Sydney’s urban transportation is being re-written by six major projects, some already inaugurated and some still under construction. These projects look to rail transport as a means of sustainable mobility for a city that is witnessing gradual but steady population growth.

Light rail lines play a central role in this evolution of the city’s public transportation. The new CBD and South East Light Rail, a 12-kilometer-long (7.4 mile) line with 19 stops, will run from Circular Quay to Central Station. The Parramatta Light Rail, another 12 kilometers and 16 stops, should be completed in 2023 and will connect the areas of Westmead and Carlingford passing through the Parramatta Business District. The third light rail line, the Newcastle Light Rail, was opened in 2019 and has the task of connecting mainly the more central areas of the city.

In addition to these, Transport for New South Wales, the government agency in charge of planning and financing transport infrastructure, is also betting heavily on three new metro lines: the Sydney Metro Northwest, built in part by Webuild Group and inaugurated in May 2019; the Sydney Metro City & South West, a maxi-line 30 kilometers (18 miles) long that will connect the city from North to South passing through Sydney Harbour; and the Sydney Metro West, intended to connect instead the Central Business District of Parramatta with the city center.

In general, the Sydney Metro project is Australia’s biggest public transport project, and by 2024 Sydney Metro says it aims to provide the city with a system that is 66 kilometers (41 miles) long with 31 stations, “revolutionising the way to travel within the largest city in Australia.”

Reducing congestion is one of the imperatives of Sydney’s development plans. To do this, the government is investing in road maintenance and the construction of new urban thoroughfares as well as in the public transport network.

The Greater Sydney Project aims to develop the network of road links around Sydney and the Central Coast to streamline access to the city.

But perhaps the most significant project is the development of the Pacific Highway, the largest road project in New South Wales, which plans to connect Sydney with Brisbane through a better road infrastructure, thereby supporting the area’s economic development. According to the official Pacific Highway Upgrade website, the highway upgrade is expected to be completed in 2021 with a reduction in travel time between the two cities of 2.5 hours and a 70% reduction in fatal accidents.

It’s a race toward the future fueled by investment, but also by a long-term vision that looks to Sydney as one of Australia’s great laboratories for rethinking the cities of the future.