Water: the Covid-19 crisis and the future of “blue gold”

Colorado River’s water levels are at risk: what is the future of this source?

The border between Arizona and California, in the middle of a desert where temperatures can easily reach 40 degrees Celsius (100 degrees Fahrenheit), is dotted with small oases of green hosting small settlements and even cities. In a landscape like this, water creates wealth. The water of the Colorado River. The wealth it creates is not only natural, but also economic and financial. It feeds agricultural communities and cities through modern hydroelectric plants.  Cities like Los Angeles, Las Vegas (where Webuild has built the tunnel that brings it drinking water from Lake Mead), and Phoenix, where a sustainable use of this vital resource is essential to reduce pollution and meet the needs of residents.

Water has become so important that it rapresents one of the pillars of sustainability set out by United National Sustainable Development Goals, but at the same time is attracting the interest of large financial investors who are convinced that water rights are the gold of the future.

Investing in the Colorado River

The strategic role of water and, in particular, of the Colorado River for what it represents and will represent for millions of Americans, in on the radar screen of the financial world. The New York Times has published an investigation looking into the proliferation of private investors now buying up water rights tied to lands near the Colorado River.

The management of the river’s water rights is entrusted to the Colorado River Compact, in a 13-page contact signed in 1922 by the governors of seven states the river passes through on the way to Mexico. The agreement stipulates how the river’s waters are to be shared among the various states.

According to the New York Times, investors are lining up to put their money into Colorado water rights. Among these are financial institutions, groups of investors, even universities. Among them is Michael Burry, the visionary hedge fund manager who predicted the sub-prime crisis, played by actor Christian Bale in the successful film “The Big Short”.

According to the Times, Matthew Diserio, president and founder of the hedge fund Water Asset Management, called the water business as “the largest emerging market on earth, with business opportunities for a trillion dollars.”

Private investor interest, which is linked to financial market trends, is of course a litmus test of the valuable role that water and its management will increasingly play in the coming years for modern societies.

Managing the waters of the Colorado River efficiently, in addition to representing a business opportunity for large investors, is a strategic necessity to overcome the risk of water scarcity, which will be ever greater in the coming years. 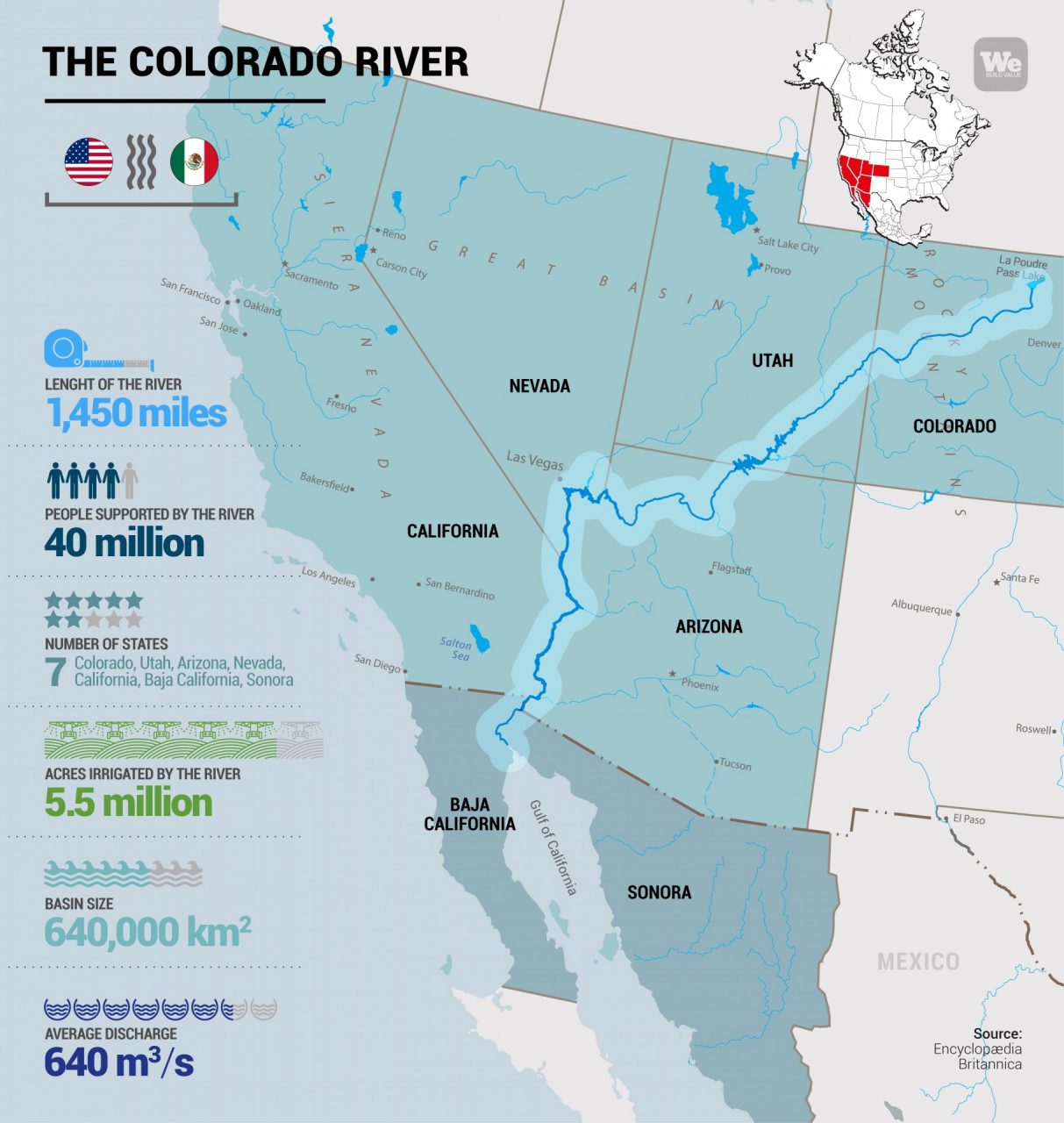 The Colorado River, a resource for America

Today, the Colorado, which runs for 1,450 miles (2,330 kilometres), provides water for 40 million people, irrigating 5.5 million acres of farmland, not only in Colorado, Wyoming, Utah, New Mexico, Arizona, Nevada and California, but in the Mexican states of Sonora and Baja California, as well as 29 Native American settlements.

The river’s water is used as much for the countryside as it is for cities, but also as an energy source. The Hoover Dam that rises on its waters generates an average of 4 billion kilowatt-hours annually (about 30 times the average annual consumption of a city like Rome).

The dam creates Lake Mead, the largest artificial lake in the U.S. that – thanks in part to the plant built by Webuild Group – supplies drinking water to the city of Las Vegas.

All in all, this is a precious resource for the West Coast of the United States. The region, however, is threatened by severe risks related to climate change.

The threat of drought

The future of the river and its economic potential now depends largely on the impact of drought in the coming years. Colorado’s traditional flows, which are essential for agriculture and cities, have fallen by 20% over the past 20 years.

Colorado River water levels have been dropping for years now because of both climate change and increasing demand, as certified by the Bureau of Reclamation, a federal agency and the largest wholesale water utility in the United States. According to an analysis by the Bureau, the flow of the river will continue to fall in the coming years, with an inevitable impact on energy production.

This is also because the annual demand and legal claim to the river’s water is 1.4 trillion gallons more than actually exist. In essence, a strategic plan is needed to reorganize Colorado’s water management, through new investments and more modern facilities.

That’s why from 2013 to 2017, James Ekland, the former president of Colorado Water, the entity that manages the river, worked together with a team of experts to develop a long-term plan that can counteract the negative effects of climate change.

He believes this long-term plan can be achieved through a market-based solution offering financial incentives to private investors and working with the public sector to deal with the threat of drought and guarantee Colorado’s future economy.