Gustave Eiffel, the engineer who designed the icon of Paris, made a risky bet

Storia della Tour Eiffel e segreti nascosti della sua costruzione
Aerial view of Paris with Tour Eiffel
Crowds gather and form a long queue to visit Tour Eiffel
Detail from the bottom of the Tour Eiffel
Gustave Eiffel wax figure in his office is located to the top of the Tour Eiffel
Montparnasse, Paris
Parisian cityscape with the view on Eiffel Tower at sunset
Tour Eiffel

From 285 meters (935 feet) above ground, the view of Paris is breathtaking. Sprawling out beneath you is the Champ de Mars, and off in the distance, Notre Dame, standing out clearly in the French capital’s unmistakable skyline.

This was the ideal location for the engineer who designed the Tower, Gustave Eiffel, to build his office, where he worked and welcomed guests. Today, visitors to the tower can peer into Eiffel’s studio from a designated platform: inside are wax statues of Eiffel and his daughter with Thomas Edison, who had a lengthy meeting with him there in 1889.

The studio is a living tribute to the man behind one of the most famous engineering feats in human history. Inaugurated on March 31, 1889, the Eiffel Tower officially opened on May 6 of the same year as a symbol of the Exposition Universelle, the world’s fair held in Paris. 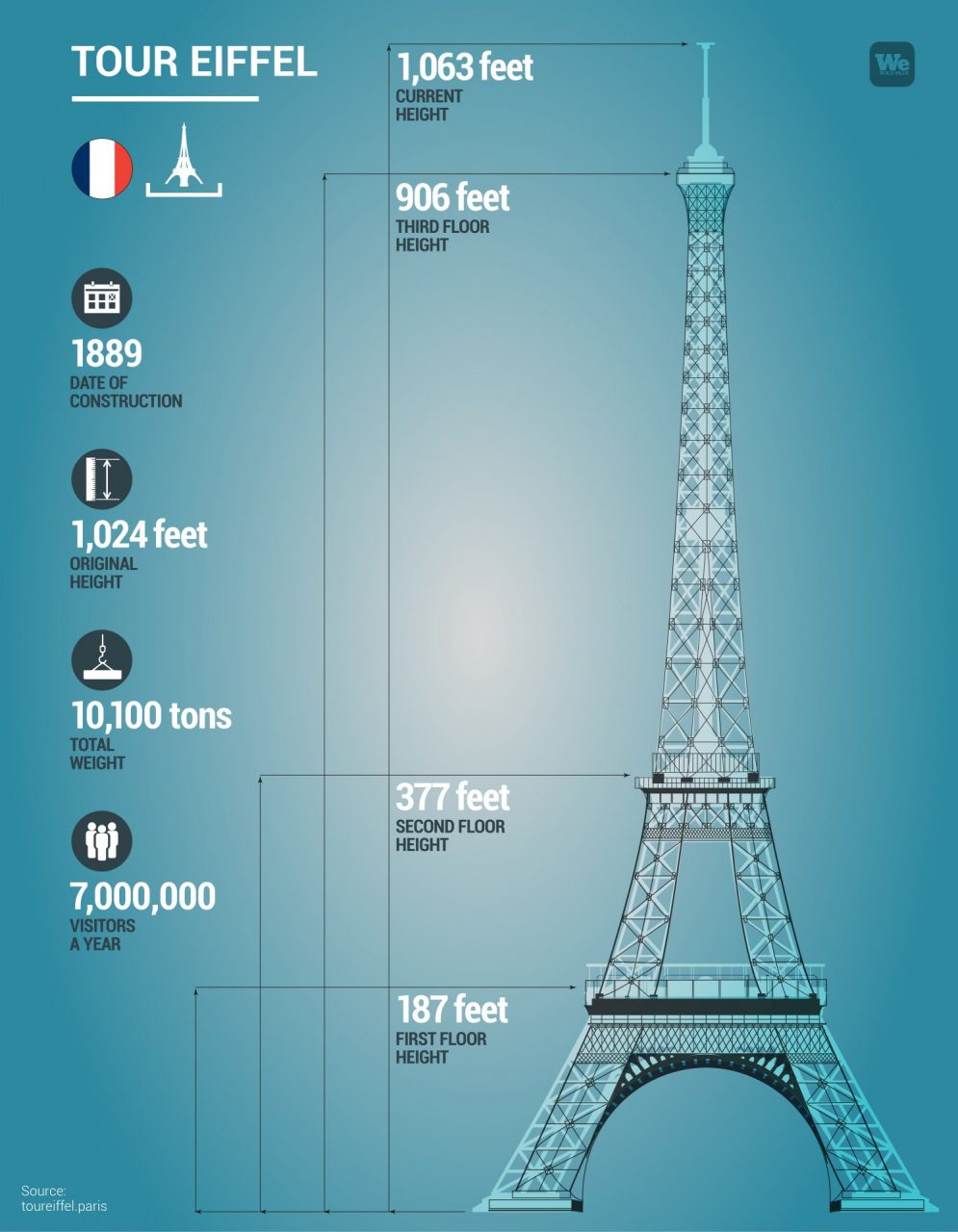 The Eiffel Tower: technical characteristics of a one-of-a-kind monument

It took impressively little time—just two years, two months and five days of work—to bring a monument of such complexity and grandiosity to fruition. Towering over Paris, it was the first structure to pave the way for the arrival of skyscrapers. Standing 312 metres (3,358 feet) high (or 324 metres today, factoring in TV antennas), the Eiffel Tower held the record for the world’s tallest building until 1930, when it was ousted from its slot by the Chrysler Building in New York City, and then surpassed again in 1931 by the Empire State Building.

But Paris’ signature structure never vied to be recognized for its height so much as for its engineering and aesthetic qualities, which were unequaled in the world. It is no coincidence that, from the more than 100 proposals submitted by the greatest international architects, the French government chose the one from Gustave Eiffel, the French engineer best known for his construction of metal bridges and for contributing to the design of the Statue of Liberty.

His proposal won for its originality and for its technical aspects. 18,038 iron parts and 2.5 million rivets were needed for its assembly, but despite the complexity and the high-altitude working conditions, only one of the approximately 300 workers employed in the operation lost his life, in an accident that occurred while the elevators were being installed.

It’s these same elevators that have been and remain an essential tool for the almost 300 million people who have climbed to the top of the Tower since its inauguration. The elevators have operated continuously all this time, save for a brief deactivation during Adolf Hitler’s 1940 visit, since some replacement parts had yet to arrive. These circumstances led the Führer to stay on the ground, avoiding the 1,665 steps required to climb to the top.

Despite the uniqueness of its engineering, the Eiffel Tower was underappreciated for many years. Shortly after its inauguration, certain members of the Parisian bourgeoisie attacked the tower, dubbing it “the iron asparagus” and deeming it an unsuitable match for the more harmonious architecture of the French capital. These grievances reached a boiling point in 1909 when the city toyed with the idea of a possible demolition.

In the end, the tower remained standing, in part because from the beginning, the monument had won the admiration of tourists, who’d arrive by the millions to explore its three lookout points offering unique views over the City of Light.

The Eiffel Tower: curious tidbits and legends of a grand monument

Beyond the controversy, the work involved, and the complexity of the structure, the story of the Eiffel Tower is steeped in legends and curiosities.

Chief among these is the variability of its height. Due to the thermal expansion of the metal that occurs during the summertime, the Tower grows an average of 15 centimetres (six inches) during the hottest months. The greatest growth on record occurred in 1976, when this heat-induced expansion added another 18 centimetres (seven inches) to the tower’s 324 metre height.

Another curious element regarding this beautiful monument is its repainting, a process that takes place, on average, every seven years. The tower has changed colors numerous times, moving from Venetian red, to ochre yellow, to chestnut brown, and finally to its current bronze, chosen as recently as 1968.

Painting the 250,000 square meters (2.6 million square feet) of the Tower’s surfaces requires an average of 60 tonnes of varnish, 1,500 paintbrushes, and 1,000 pairs of gloves. It usually takes about 18 months, throughout which the Tower stays open.

The intriguing facts and legends connected to the Eiffel Tower’s construction, paired with the impact that it had and continues to have on the city, have made this monument so much more than just a feat of modern engineering.

After defeating the early skepticism, the Eiffel Tower became a symbol of Paris and an ambassador of French values in the world.

Stonehenge, thousands of years to build a mysterious work