Innovation and technology characterize Japan's earthquake technology, to shelter metropolises from the risks of strong earthquakes.

In 2018, Osaka, Japan’s second largest city by population and economic value, was hit hard by a major earthquake, which once again demonstrated Japan’s earthquake technology excellence.

The final balance of 3 fatalities and over 200 injured looks quite contained given the quake magnitude of 6.1 on the Richter scale. In any other part of the world, this event would have caused a much greater tragedy.

This earthquake swarm with an epicentre near Osaka spread to other areas and arrived as far as Tokyo, shining a spotlight on Japan’s capital, which is already a world leader in modern anti-seismic technology.

A city where the battle against earthquakes is fought each and every day, with innovation and with technology. And the need to invest is growing each year — figures released by the Infrastructure Ministry show that annual spending to maintain, repair and manage water mains, ports, airports and other large infrastructure works across the country will reach $46.1 billion by 2023.

Despite the constant risk of being hit by a devastating earthquake, Tokyo was named the world’s safest city in 2017 by the Economist Intelligence Unit’s Safe Cities Index, followed by Singapore and, in third place, by Osaka.

Protecting people from earthquakes is essential for a city that’s continually on the move, a megalopolis of almost 14 million inhabitants that extends for over 2,000 square kilometres and is criss-crossed by an extensive transport network (13 subway lines and over 100 ground routes).

Tokyo is capable of meeting this challenge, as demonstrated by the Economist Intelligence Unit’s index that examines 60 cities around the globe based on various criteria, from digital security to physical safety. Safety of infrastructure is given top priority – and in Tokyo’s case, the quality level of infrastructure reaches extremely high standards.

Earthquake risk has been the biggest driver for both central and city governments to invest in ever-more modern and efficient anti earthquake building.

According to a study by Tokyo University, 87% of the city’s buildings have been constructed according to modern anti-seismic standards. A prime example is the Tokyo Skytree. Inaugurated in 2012, this 2,080-foot-high tower was designed by a team of 100 experts to be totally earthquake-proof building. The interior construction was inspired by China’s ancient pagodas.

Other skyscrapers were equipped with a special 300-tonne pendulum, capable of cushioning vibrations, which helps the building to sway in the event of earthquake. These so called “dampers” were patented by a Tokyo real estate company and sell for $51 million.

The city invests in new technology and innovative solutions that transform its face, on the surface but also under ground. Deep underneath Tokyo, between football pitches, parks and buildings, runs the Metropolitan Area Outer Underground Discharge Channel, a tunnel over 6 kilometres long. It was designed to deal with the flood from a possible future tsunami or a hurricane, by channeling the waters into the Edo River without trauma. The tunnel took 13 years to dig and cost $3 billion, but its contribution to the city’s safety is priceless. 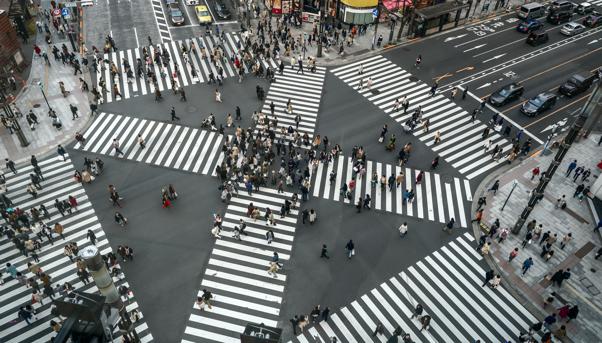 Japan experiences an average of 2,000 earthquakes each year, some of them with a very high potential for destruction. In 2011, when the country was hit by a 9.0-Richter scale quake, 27 Shinkansen high-speed trains were running. Thanks to the seismographs placed throughout the country that can detect the Earth’s tremors ahead of time, the bullet train conductors were able to activate the emergency brakes a few seconds before the most violent waves of the earthquake arrived. None of the passengers lost their lives or were even injured.

This outcome did not happen by chance. The Japanese government has spent $1 billion to build its world famous seismic alert system that can detect the peak of the quake 80 seconds before it arrives. This advantage – particularly in a city like Tokyo – is essential to give people the time necessary to take urgent steps like step away from windows and shut off gas mains to avoid the risk of explosion.

These are all important works that do not, however, mean that Japan can stop investing in anti earthquake building. The Infrastructure Ministry has calculated that by 2023, the cost to maintain, repair and manage water mains, ports, airports and other large infrastructure assets will reach $46.1 billion, or 40% more than 10 years ago.

This technology at the service of citizens’ safety is the result of a long research and development process that started at the end of World War II and was accompanied by very strict building codes. The first large post-war quake was in Fukui in 1948. Two years later, in 1950, the Building Standards Act was approved, a regulatory plan that forced infrastructure construction companies to respect new standards.  The Act was updated after the Tokachi earthquake in 1968, and again in 1981.

Ever since then, regulations have marched in lockstep with the development of new anti-seismic technology, with continual improvements and attaining extremely high safety levels.  The city administration in Kobe said that only 1% of buildings erected after 1981 were destroyed during the Hanshin earthquake of 1995. And in 2011, during the Great East Japan Earthquake, one of the most violent in Japan’s history, not a single building in the Sendai business district was damaged. Further proof of how innovation in infrastructure construction can result in protecting people’s lives.

Urban requalification is changing the Bronx

High speed rail links may become real for US passengers