With the Bridge Comes a Region

The construction of the Oresund Bridge created a new region between Sweden and Denmark, as well as new jobs.

5 interesting bridges of the world that benefit the economy

In Danish it is Øresundsforbindelsen. In Swedish, Öresundsförbindelsen. It is not a Nordic tongue-twister but one of the most important pieces of infrastructure in Europe. It is a highway and a railway line that runs on a bridge and inside a tunnel, uniting Denmark and Sweden. These two countries are similar in wealth and technological sophistication but are separated by the strong currents of the Öresund strait.

Inaugurated on July 1, 2000 in the presence of Danish and Swedish royalty, the €4 billion Öresund Bridge is 12 kilometres long: eight for the actual bridge from the Swedish coast to the artificial island of Peberholm, and another four along the Drogden Tunnel to the Danish coast before arriving in Copenhagen.

Some 70,000 people cross the bridge every day, or more than 25 million every year by vehicle or train. The island has fostered the creation of its own flora and fauna ecosystem without human interference, attracting interest from biologists the world over.

The bridge itself has become a subject of study, a tourist attraction, a catalyst for economic development and an example of cross-border integration. A study by the Organization of Economic Co-Operation and Development (OECD) said the bridge had helped the area develop its own brand and overcome problems usually associated with borders by fostering trade.

Inhabitants on either coast had dreamed of a connection since 1930s. In Malmö, a Swedish city of 316,000 residents and home to Scania, there is not one shop that does not sell magnets with the image of the bridge. Apart from the tourists who take photos on the beach of Ribersborg, the bridge has come to represent Scandinavia in its own way. It is not by chance that it became a virtual character in the Swedish-Danish television series known globally as “The Bridge” about a crime committed on it.

This engineering masterpiece has made possible in a few years a closer integration between the Hovedstaden and Selandia regions in Denmark or Greater Copenhagen and the Swedish county of Scania, best known for its industrial past. Traffic on the bridge has increased since its opening. In 2001, less than 3 million vehicles used it. But by 2016, the number had more than doubled to 7.4 million (20,284 a day. 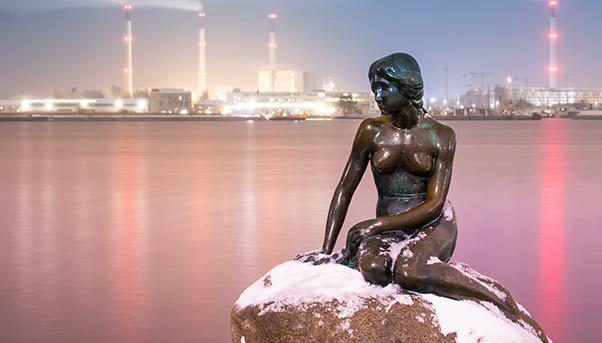 The bridge Denmark Sweden, a flywheel for employment

Thanks to this link between the two countries economists and sociologists have spoken of the creation of the Öresund region: a cross-border metropolitan area that focuses on biotechnology, green technology and similar industries. It represents 27% of the aggregate gross domestic product (GDP) of Sweden and Denmark and covers an area of 20,800 square kilometres. A report published out of Denmark a few years ago estimated that the bridge has helped generate more than €8 billion in wealth in 12 years compared with the €4 billion used to build it. One result has been more jobs. About 18,000 Swedes who had worked at Scania were later able to find work in Copenhagen.

Although the region is binational, Denmark is more present economically. Two-thirds of its nearly 4 million residents are Danes and Copenhagen has the highest pro capita GDP. Meanwhile, Scania is growing faster even though it has 20% less wealth. It is the second biggest destination for direct foreign investment in Sweden. All of this, of course, is due to the bridge, which is linked to a unique road network. Most of the area’s people and businesses are located near the imposing structure.

The region’s vitality is extraordinary. In 2009, 26% of new businesses opened in Denmark and Sweden did it there. The techno-scientific hub is world class. Some 5% of the local GDP is invested in research and development, a rate that exceeds the average in both Denmark and Sweden. And 73% of investments are private and not public.

The Oresund Bridge Region: a leading technology and industrial hub

The growing number of U.S. venture capitalists taking up residence in the region is sign of how it has become home to innovation. California might have Silicon Valley but Copenhagen and Scania have what is known as Medicon Valley: an industrial and technological district specialized in biomedicine and especially in the fight against diabetes, cancer, asthma and other ailments.

There are more than 350 businesses in the region that employ 40,000 people and can count on excellent universities in Copenhagen and Lund, Sweden, ranging from big pharmaceuticals to start-ups.

Another specialty is green technology. Denmark, for example, is the world leader in wind turbines. Scania has a long tradition in engineering. The county is a success story because it found a way to reinvent itself from construction to advanced manufacturing.

The region is also a hub for training. There are 15 universities that have a base there, attracting talent from the world over.

Other infrastructure also contribute. Copenhagen with one of the best airports in northern Europe at Kastrup, which is also headquarters for the Scandinavian airline. Other bridges include the 7-kilometre suspended Storebæltsforbindelsen bridge that connects Selandia and Fionia.

The 5,000 companies working to create a more sustainable Italy