From the City Loop to the Suburban Rail Loop, the Australian city addresses the challenges of a growing population

Melbourne: A rail link between city and airport

Melbourne’s success in planning for the future has helped it maintain its title as one of the world’s most liveable cities.

The high standard of living enjoyed by its residents is the result of the ability of Victoria state capital to anticipate their needs; no small feat given how these needs change as the population grows.

Some needs, however, never seem to change – especially when it comes to transport.

And as past and future infrastructure projects can attest, the Victoria state government tries to respond to the call to relieve the strain caused by the dynamism of the city. 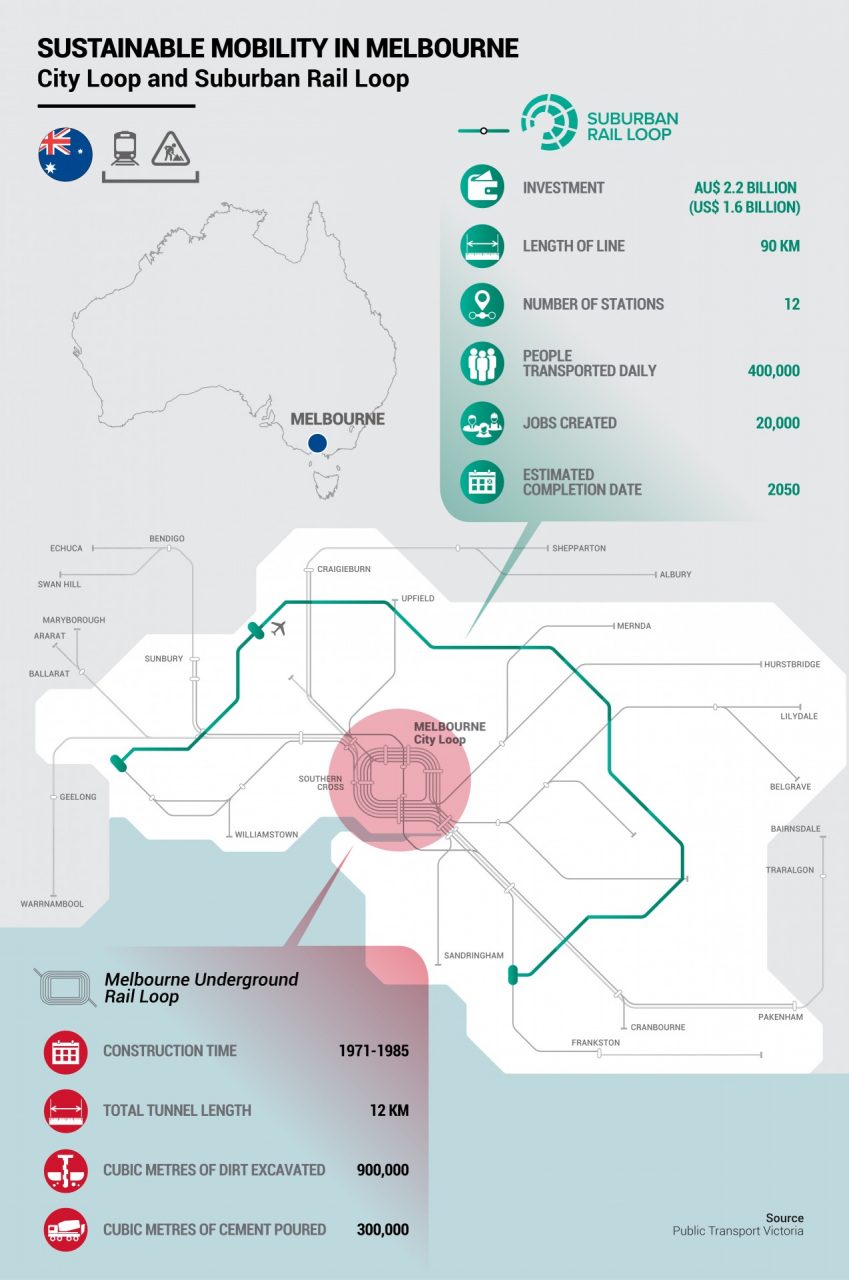 Metro Melbourne: the great challenge between past, present and future

Take the Melbourne City Loop, originally titled the Melbourne Underground Rail Loop (MURL): . Built 40 years ago, it was designed to address a challenge that is all too familiar to present-day Melburnians. In an old documentary film about the MURL’s construction, this challenge is described in the most succinct way: “It is a big city. Big in size. Big in population. But it has its problems. Moving people to and from work, and around the city every day is one of them. More and more people placing more and more strain on transport systems,” says the narrator.

The same challenge is faced by the Suburban Rail Loop, which stands to become one of the biggest infrastructure projects in the country. It is designed to make it easier for people to move among the city’s suburbs without having to pass through the Central Business District (CBD).

By connecting to rail stations and metro lines, it will reduce congestion and take pressure off the transport network, including the City Loop.

Similar projects can be found in other cities, such as the Grand Paris Express in Paris, or the Cityringen metro line built by the Webuild Group in Copenhagen.

A Transport Network for Generations to Come

In its latest budget, the Victoria government assigned AU$2.2 billion to the first stage of the Suburban Rail Loop, one of several initiatives to create thousands of jobs and revive a regional economy hit hard by the COVID-19 pandemic.

“The pandemic’s economic impact is likely to be the biggest in nearly a century,” the treasurer told state parliament. “Without decisive action, the impact could be devastating.”

Speaking to the Australian Financial Review newspaper, he was optimistic about the budget’s effectiveness. “You are going to see a substantial spring back”.

Transport Infrastructure Minister Jacinta Allan was quoted by the Herald Sun tabloid as saying: “we’re rebuilding our economy — getting thousands of Victorians back in work and preparing our transport network for generations to come”.

The Suburban Rail Loop will be 90 kilometres long and have 12 stations, facilitating the daily journey of 400,000 people.

There will be three transport super hubs at suburban centres, such as Clayton, Broadmeadows and Sunshine to connect it with regional services.

There will also be a stop at the airport.

By helping take an estimated 200,000 vehicles off the city’s streets every day by 2051, the project will reduce the emission of harmful gases.

With much of the Suburban Rail Loop to be underground, expect the digging under city streets to be just as impressive as what was shown in the film about the construction of the MURL – with albeit more modern machinery and safer working conditions.

“Beneath this sprawling city a drama is taking place,” says the narrator to images of drills, hard hats and trucks – and plenty of rattling noise. “A drama which will reshape the metropolitan transport system.

“In the darkness below… rotating pick machines with teeth harder than steel continue an unrelenting drive towards the day of completion,” he continues in the film produced by the then MURL Authority and posted on www.youtube.com by Public Transport Victoria, the state’s transport authority. “The staccato of pneumatic drills chatters the eeriness as man and his tools come to grips with the earth’s stolid toughness.

“Around the clock, the unremitting task goes on towards the reward and conclusion and completion …of an underworld artery which will carry Melbourne’s railway system into the 21st century.”

The MURL was the flagship project of Victoria Premier Henry Bolte’s vision of roads and railways. It gave commuters the convenience of five stations around the edges of the CBD.

Known by Melburnians as the City Loop, its construction lasted between 1975 and 1981. The Webuild Group’s predecessor, Cogefar, was instrumental in the construction of four major segments, totalling 11 (out of 13) kilometres of tunnels. It was also responsible for two underground stations – Flagstaff and Museum (now Melbourne Central) – and the laying of reinforced concrete sleepers and tracks throughout the Loop.

The Suburban Rail Loop is the flagship infrastructure megaproject of Victoria’s incumbent Andrews Government, addressing the challenges posed by the arrival of more than 100,000 residents a year, a rate that is to put Melbourne on track to become Australia’s most populous city by 2026, according to estimates made before the pandemic.

With the Bridge Comes a Region