PERTH: A new LRT to run under the city’s streets

Completion of the Forrestfield-Airport Link set for 2021

Perth’s Construction Projects: a big challenge for the city

With more than a quarter of the track already laid along the twin tunnels of the Forrestfield-Airport Link, work towards the completion next year of Perth’s biggest transport infrastructure project is progressing at a steady clip.

Workers are pouring concrete, laying track, installing cables and placing solar panels, among many other tasks along the 8.5-kilometre Airport Line under construction in Australia’s fourth biggest city.

On a recent visit to one of the work sites of the AU$1.86-billion ($1.38 billion) project, Western Australian Premier Mark McGowan spoke of the contribution that its construction was currently making to the region as well as the benefits it would impart after its completion in late 2021.

Activity at the work sites proceeded uninterrupted during the COVID-19 pandemic, and McGowan said this had helped guide the region out of the pandemic and build the economy back up. “The Forrestfield-Airport Link construction employs hundreds of local workers and provides opportunities for local businesses and subcontractors,” he said in a statement after the visit. 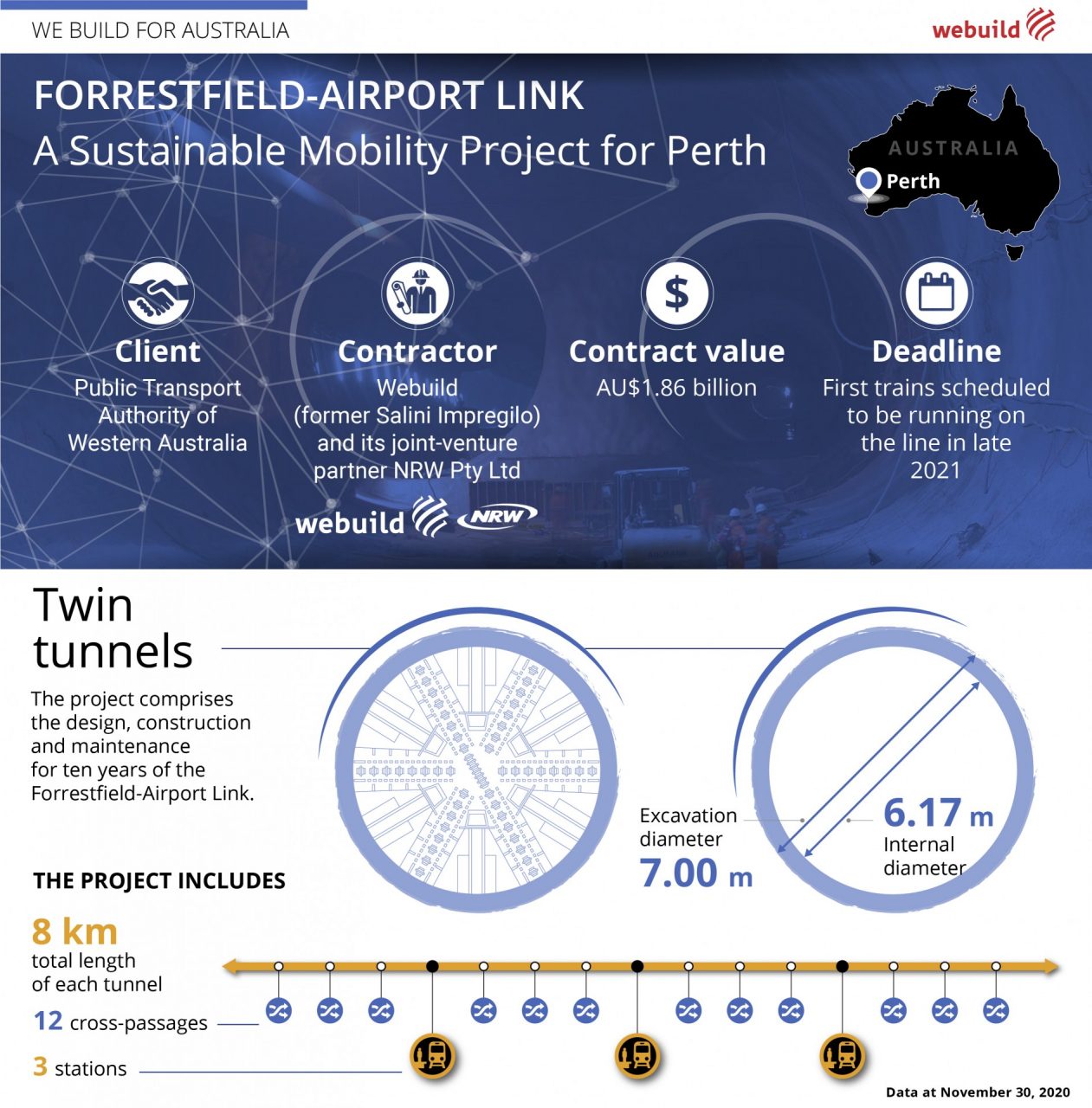 Forrestfield-Airport Link: the impact on labor

Nearly 90% of the 1,218 suppliers and service providers supporting the Webuild Group and its joint-venture partner in the construction of the line are Australian. And the value of the contracts they have earned is substantial: approximately AU$1 billion.

Some 3,000 direct and indirect employees have been inducted over the duration of the project.

The emphasis on inclusion and diversity has also been evident with the involvement of Aboriginal people, who have been responsible for 2.57% of the total amount of working hours registered for the project to date. In addition, there has been AU$15 million worth of procurement from Aboriginal businesses, from a total of AU$40 million worth of tender opportunities.

Western Australian Transport Minister Rita Saffioti, who joined Premier McGowan on the visit, said it was exciting to see what had been achieved so far.

Workers had laid nearly four kilometres of track at the time of the visit, across both tunnels. “We’ve reached several milestones this year with the completion of tunnelling and the start of track laying,” she said in a statement. 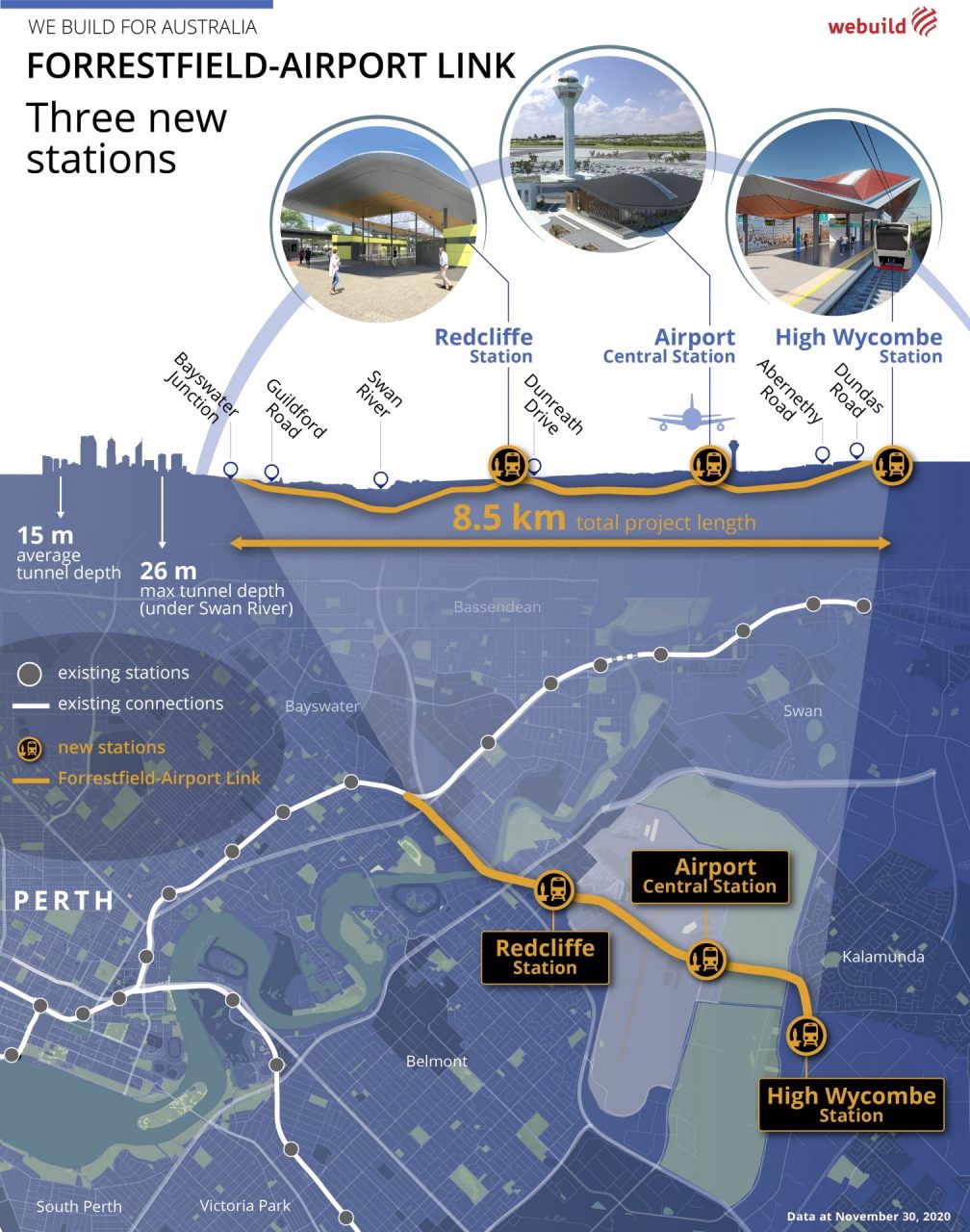 The Forrestfield-Airport Link will spur off the existing Midland Line near the suburb of Bayswater close to the city centre, pass through the suburb of Redcliffe, arrive at Perth Airport and then head towards High Wycombe to the east.

It will have three stations: Redcliffe, Airport Central and High Wycombe.

Located on the east end of the line, High Wycombe Station will have 626 solar panels, which will produce enough electricity to meet the average demand during summer daytime for all three stations.

The Line is expected to help the city keep its high standard of living as its population grows from about 2.0 million to 3.5 million in 2030.

High Wycombe residents to the east will be able to travel to the city centre in 20 minutes rather than the usual 45 minutes by car at peak hour.

Estimates forecast it removing 15,000 vehicles from the road every day by 2030, helping reduce traffic congestion and air pollution.

“This is about making our area more liveable,” said the Hon Ken Wyatt AM MP, Federal Member for Hasluck.

Brenner Base Tunnel: innovation and sustainability for a record-setting project