Genoa and Liguria: a look at PNRR projects

Genoa-Milan: the high-speed train route running below the mountains

Arriving at Genoa’s port from the sea, on a winter’s day with the sun high in the sky and the cold air blowing in from the Appennino, is first and foremost a visual experience. The first thing that strikes the eye is the construction cranes rising from behind the Old Port, the docks, the industrial warehouses and the old town partly hidden by the modern expressway. Dozens of cranes, many of them in motion. They seem to be staging a revolution, one being waged in worksites across the city, ambitious projects driven by the ambition to bring Genoa back to its past glories, when the Maritime Republic was a world center for the exchange of goods and people.

The city has been awarded €2.2 billion in public funds, divided among 27 projects, from the Terzo Valico dei Giovi-Genoa Node rail project, to the Foranea Dam, to increase in the city’s railway capacity, and redevelop the Hennebique silo and the new waterfront. This series of projects started well before the advent of Italy’s EU-funded covid stimulus, the National Recovery and Resilience Plan, and are central to the revitalisation of the port of Genoa through complex and sustainable infrastructure such as high-speed rail.

“Our plan to transform the port exceeds the €2.2 billion amount we have set aside in our provisional 2022 budget for it,” explained the President of the Port Authority Paolo Emilio Signorini in a press conference. “And this makes us one of the main contracting centres in the country. We have 27 projects planned, and we have opened 20 construction sites.”

The Prometeia research center has calculated the impact of this bristling next of cranes mean for the city of Genoa. According to Prometeia over the next four years 22,000 people will be directly involved in the construction sites (73% of whom will work in the construction sector), creating an added value of €1 billion.

Some of these people have already been working on site for years at the Terzo Valico dei Giovi crossing, the high-capacity railway that will connect Genoa with Milan, and in particular in the Genoa Node section. This is a truly revolutionary project, because it will extend the high-speed rail to cover the city’s last mile, transporting goods from the port to the heart of Europe. 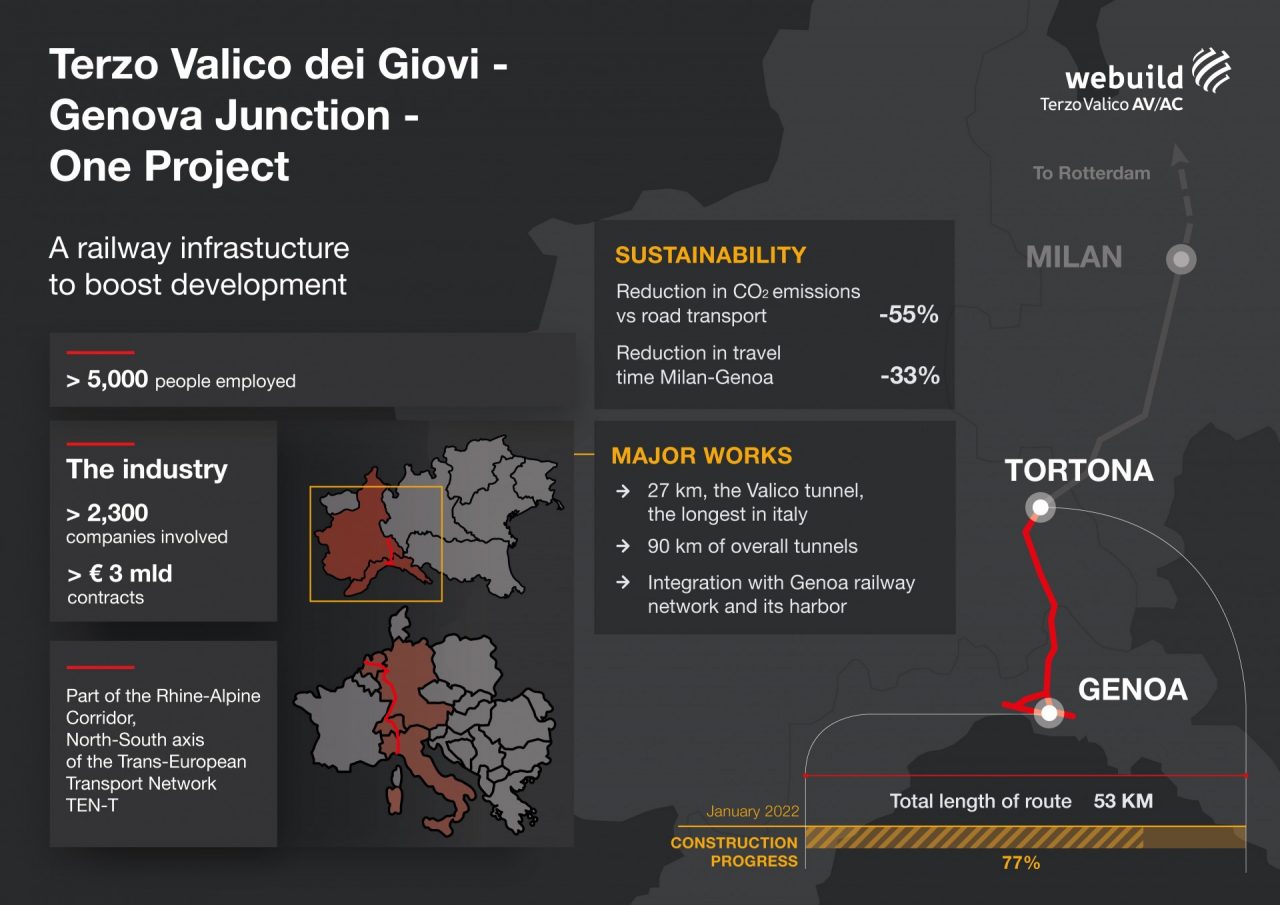 The last milestone of the Genoa Node

Work on the excavations that run beneath the surface of Genoa continues apace. And on December 21, the excavation of the San Tomaso tunnel, one of the three tunnels planned for the railway node, was completed, bringing the progress of the Node’s excavation to 83%. The new tunnel is about 1,500 metres (4921 feet) long and will have a single-track layout that will run as far as the existing section of the San Tomaso tunnel, at the Genoa Piazza Principe train station. In addition to this, the Node project envisages the construction of two other tunnels, the Nuova Colombo Tunnel and the Polcevera Tunnel, 1,409 and 2,167 metres (4622 and 7,019 feet) long respectively, which will make it possible to cover the last mile connecting the Terzo Valico dei Giovi crossing with Genoa’s industrial Prà Port‘, separating regional and metropolitan trains from long-distance trains.

This means that the high-capacity railway (the fast trains capable of transporting goods) will reach the heart of the city, thus creating a direct connection between the sea and the mainland. From there, goods, as well as people, will be able to travel on the Terzo Valico line, covering the distance between Genoa and Milan in less than an hour, with a 33% reduction in travel time and a 55% reduction in CO2 emissions compared to road transport.

A boost for the economy and transport

The underground infrastructure that will allow the separation of local transport from fast trains is a strategic accelerator for the city’s economic development. Goods and people travelling directly to Milan, Turin or central Europe will in fact be able to enjoy a dedicated “lane” covered by the high-capacity railway that leaves from the heart of Genoa.

The Node will also allow for better regional and metropolitan connections because it will quadruple the Genoa-Voltri-Porta Principe line, as well as providing for the construction of two new tracks between the city’s railway hubs of Porta Principe and Brignole. The work, carried out by the Covic Consortium led by the Webuild Group for Rete Ferroviaria Italiana (Fs italiane Group), was included by the government in the country’s list of strategic projects, and therefore is being overseen by the Government Special Commissioner Calogero Maugeri.

On the whole, these projects are a considerable driver for job creation and local entrepreneurship. More than 5,000 people are involved in the construction of the Third Valico dei Giovi-Genoa Node, supported by a supply chain of 2,300 companies representing the best of Italian technology and know-how. These people are the true added value of an ambitious plan that aims to relaunch Genoa starting from the very place where its history began: the sea.

Lima: the mega-city moves ahead on Line 2