The sustainable road to rebuilding the future

Growth in construction is outpacing global GDP in the post-Covid recovery. Large-scale construction projects have been a major driving force in the upturn, which has already been stronger than many expected it to be.

The data shows that while the world’s GDP will grow by between 5.6% and 6% in 2021, the added value produced by construction in advanced countries will be even higher, growing by 7.6% in Australia, 7.4% in Asia and 6.3% in the United States. The European figure is lower, with growth stopping at 4.1%, but only due to Germany’s less-than-stellar performance. Countries such as France, Italy and the UK will also see over 6% growth in the sector.

After 2020, when Covid-19 threw a wrench in projects the world over, halting cranes and construction sites, a newfound vitality is coming to the construction sector. It is being transformed by new, more expansive government policies, which see debt as an opportunity to invest to build wealth and employment opportunities. 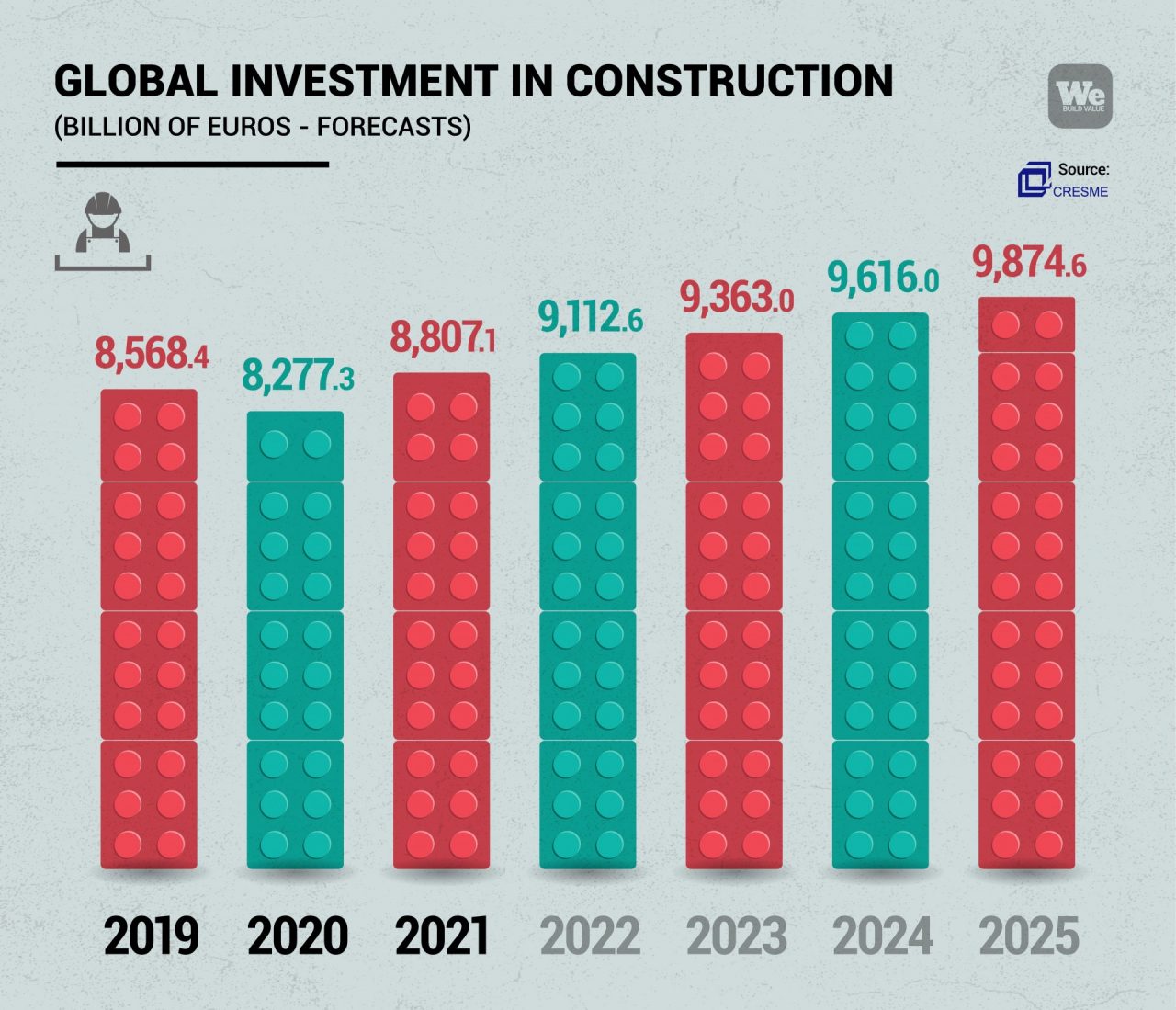 Investments in costruction market and national plans to revive economies

Rethinking lifestyles in major cities, supporting sustainable mobility to better protect the environment, and facilitating intelligent use of raw materials (like water) through more efficient infrastructure are the major issues currently lighting up the construction world and its revival.

According to Cresme calculations, direct impact measures are worth 25.5% of GDP in the United States; 16.2% in the United Kingdom; 8.5% in Italy and 7.6% in France. And a substantial part of these funds focuses on infrastructure. Of the $5.1 trillion (€4.2 trillion) announced by US President Joe Biden for various development initiatives, at least $600 billion (€502 billion) will go toward financing roads, bridges and railway lines.

In the UK, too, Boris Johnson’s Build Back Better plan aims to invest €100 billion ($119 billion) in the sector in 2021 and 2022 alone, which will increase to €600 billion (€716 billion) over the next five years. In Italy, through the combined provision of the Next Generation EU, the React EU fund, the European Complementary Fund and the government-approved budget deficit, the Ministry of Infrastructure and Sustainable Mobility will have €61 billion ($72 billion) to invest. €35 billion (€41 billion) of that total is earmarked for interventions to upgrade the rail network, focusing mainly on high-speed rail.

Italy and the construction-driven comeback

Despite its past of stagnant growth and lack of public investments, today Italy seems determined to make up for lost time, looking to large-scale works as an important driver for sustainable, lasting growth.

The road to recovery began in recent years, as can be seen in the propensity toward investment. Because of the additional support now guaranteed by European funds, this recovery is now accelerating significantly.

According to Cresme, in 2023 the country will receive a record €135 billion ($161 billion) in investment in the sector, a result achieved through the growth rates of recent months. Indeed, when comparing the first quarter of 2021 with the same period in 2020, investments in large-scale works increased by 14.7%. The year is expected to close with 15.5% growth.

Investments in public works alone are expected to see a 20% boom in the current year. 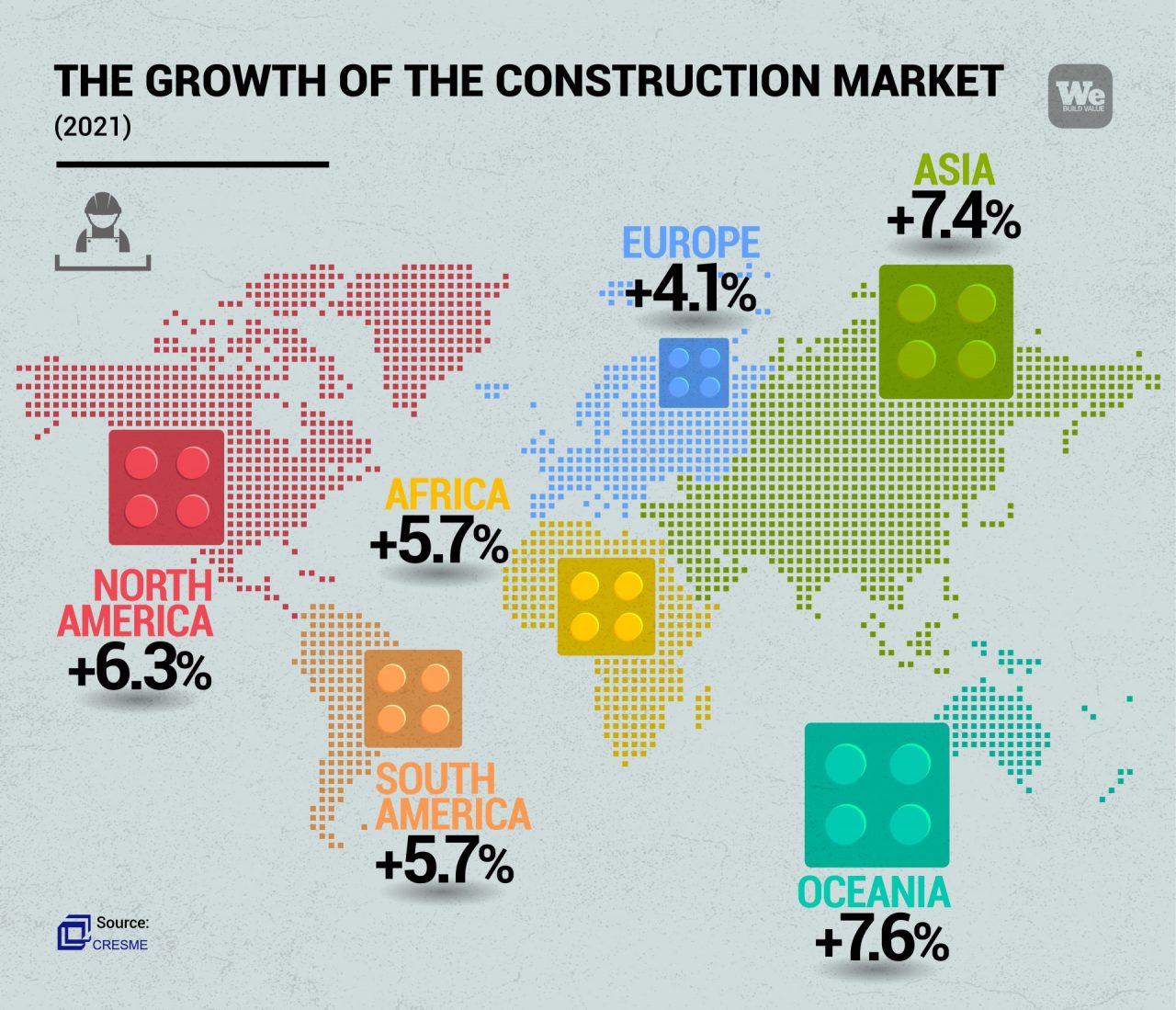 Sustainability and digitalization: drivers of development in the construction market

The future of the construction market looks bright, but the sector’s revival will only hold up long-term if investments are made in sustainability and digitalization. This is what the European Union is asking of Italy, and this is the trend also being embraced by large developed economies, with the United States and Australia in the lead.

Large-scale works will need to be sustainable in terms of both the materials and techniques used, as well as for the impact they have on people’s lives. They will be the real engines of the post-Covid revival, the final step of which is the defeat of the pandemic itself.

“If in autumn we can confirm that the pandemic has been defeated, there will be even greater euphoria,” Lorenzo Bellicini of Cresme continued. “Construction is the key ingredient of this phase, the subject of a strong demand built on two driving forces: sustainability and digitalization, the only forces that can put us on a better path toward innovation and development.”

Many investments will arrive in the short term, while others will be needed over the medium and long term. Next Generation EU funds, along with other European funds for infrastructure, can only cover a portion of Italy’s infrastructure needs, which are still considerable given that the country is lagging behind in several fields, particularly in the region of the underdeveloped South.

Today, Webuild Group is involved in construction of new high speed rail lines throughout the country, including the Terzo Valico dei Giovi that will connect Genoa to Milan, a new Naples-Bari line, and the high-capacity line in Sicily. In the South alone, these open construction sites will employ 15,000 people, but are not enough on their own to bridge the country’s infrastructure gap.

According to Cresme, when considering the strategic infrastructures that the government has indicated as priorities, the availability of funds for the coming years is €204 billion ($243 billion) – €100 billion ($119 billion) less than the country’s true need. The specific breakdown of what is needed is another €66 billion ($78 billion) on the rail network, €14 billion ($16 billion) for roads and highways, and €9 billion ($10.7 billion) for urban transport systems.

Bridging this gap will be the real challenge to transform this short-term recovery into ongoing, lasting development, driven by sustainability and innovation.