Progress continues on new Toronto Waterfront, one of the most ambitious projects in North America

Public transport in Canada: Ottawa leads the way with its project

One of the world’s largest and most ambitious urban waterfront renewal efforts is underway. Infrastructure projects to the tune of CAD1.25 billion (USD981 million) aim to transform Toronto’s waterfront into one of the city’s main attractions. Safety is a top concern: various strategic infrastructures, from the construction of new bridges to the development of a wastewater management project, are being prioritised.

Known locally as the Don Mouth Naturalisation Project, the overhaul is almost midway to completion after four years of work. The project is expected to wrap up in 2023.

Safeguarding the area and protecting it against flooding has entailed a series of new infrastructures: namely roads, bridges, and urban transportation lines, but also parks, entertainment centers and pedestrian-only boulevards. This is part of a broader effort of neighborhood redesign.

The project dates back to 2001, when it was first entrusted to the Waterfront Toronto agency. With support from national and regional government as well as from Toronto’s city administration, the goal is to transform these 800 hectares (a three-mile stretch) from brownfields into one of the most attractive urban areas on the American continent.

Flood-proofing the island by way of bridges

Last October, four prefabricated steel bridges, built with a CAD100 million (USD78.5 million) investment, were brought to the Toronto coast from their manufacturing location in Nova Scotia. Between the time of publication and fall 2021, these new structures will be installed in the Cherry Street area as part of the Port Lands Flood Protection Project. The Cherry Street North Bridge, the first in the series, arrived in October. It is only an initial step in a larger Waterfront Reconstruction Project aimed at creating safe connections and mitigating flood risk.

About 500 feet (152 metres) long and weighing 1,210 tons each, these bridges will safely and efficiently connect the mainland to Villiers Island while protecting travelers from Don River flooding. In recent years, flooding of the Don River has inundated portions of Port Lands, South Riverdale and Leslieville. The Port Lands Flood Protection Project will work along the river to more efficiently connect it with Lake Ontario.

Beyond enhanced transportation safety, the hope is for the new bridges to contribute to broader revitalisation efforts of Toronto’s waterfront, reflecting Toronto’s transition away from its industrial past to focus on building a reputation in tourism, finance, and advanced services. 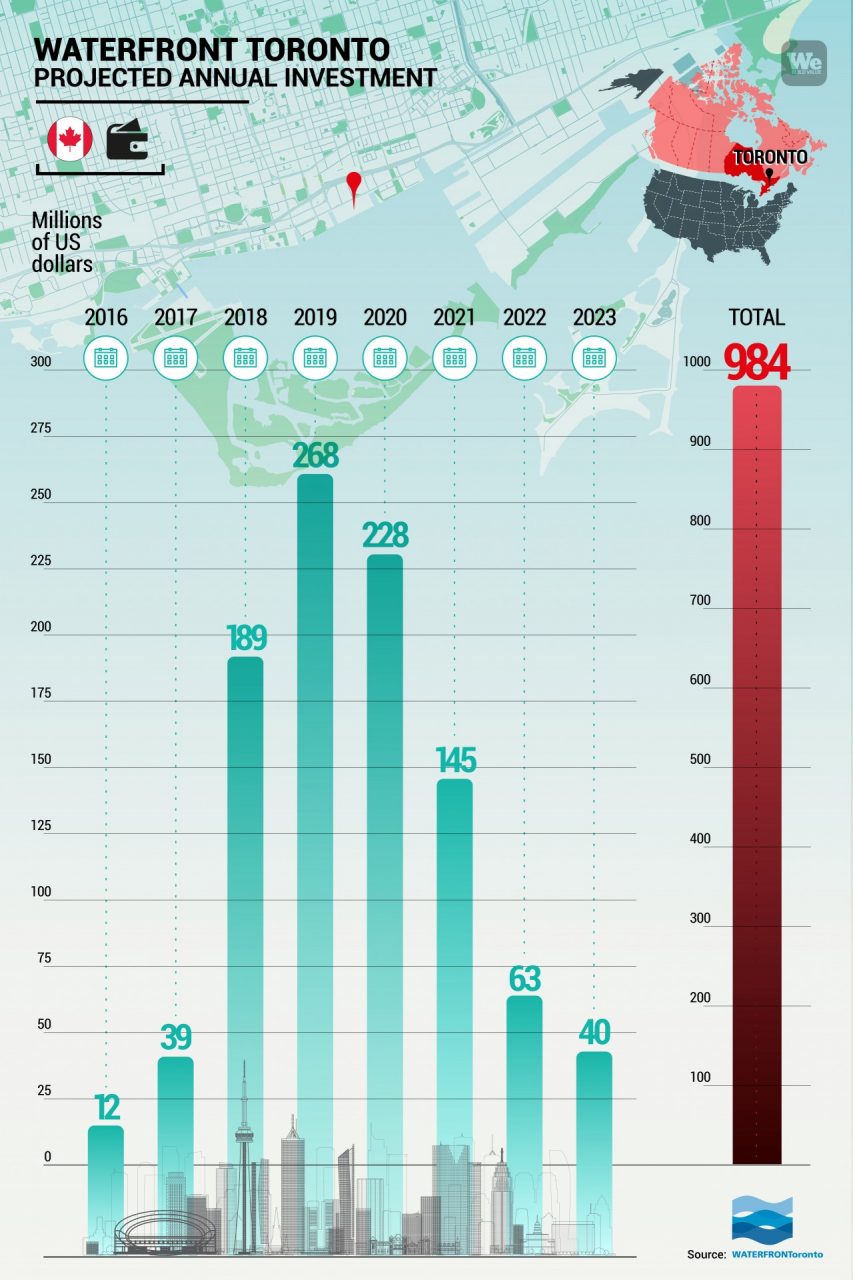 The Waterfront Redevelopment Project will also involve upgrades to three city streets—Cherry Street, Commissioners Street, and Don Roadway. Work on the three arterial roads is expected to be completed by 2024 and will bring Toronto a new road network built on sustainable mobility principles. Roads will be structured in a way that limits the scope of vehicle transit. According to the Waterfront Toronto website, some 71.9% of the physical space on the three routes will be reserved for other purposes. The new road setups will include a reserved lane for urban rail transit, trees, and spaces for pedestrians and cyclists. Some 480 trees will be planted across the three streets, for a total of 2.18 hectares (5.4 acres) of greenery. Notably, the trees can absorb 1,806 cubic meters (1,806,000 liters) of water from possible atmospheric precipitation.

These developments model a new approach to urban development, where even the most traditional of infrastructures—roads—can be reconceived as sustainable and contribute to a better quality of life.

In addition to environmental and infrastructural shifts, the Waterfront project and others like it promise to significantly impact Toronto’s urban development. The city is increasingly intent on becoming more of an international metropolis.

Waterfront Toronto has carried out a series of analyses on the economic impact and job creation of this project. Some 41,100 jobs will have been created once work is complete, and the economic return for Canada is expected to reach CAD4 billion (USD3.4 billion).

In recent years, some 13.5 billion in private investment in the area has supplemented public funding, helping facilitate housing for 3,500 people.

The direct changes that the project entails reflect an urban renaissance: renewed housing, shopping malls, and gathering spaces, all of which will help foster city development. This is Toronto looking to the future. The metropolis is also preparing for the completion of Pinnacle International, a 95-story skyscraper that has already snatched the record for Canada’s tallest residential tower ever. Covid-19 has had its impact, as it has in cities around the world, but Toronto’s top projects have not slowed down. Everything from Toronto’s real estate efforts to its urban reorganisation is aimed at one goal: creating a sustainable, vibrant, and modern metropolis for Canada and the world.

London: making a fresh start with the Elizabeth Line