London: making a fresh start with the Elizabeth Line

As British capital struggles through Covid-19, it looks ahead to 2022 when its massive new subway line will open its doors.

London: City on the Go

Pre-Covid and pre-Brexit. These two words describe where London wants to go right now. To get there, it is relying on two massive infrastructure projects that in terms of their economic impact will support the British capital’s ambition to remain a global centre of attraction for finance and business.

Even London, the city that in recent years has redesigned its skyline and revived entire neighborhoods, must now reckon with the effects of a pandemic that has hit Britain more violently than elsewhere. The city has been forced to postpone the opening of the new underground public transit line Crossrail — renamed Elizabeth Line in honor of Queen Elizabeth II – from the summer of 2021 to the first half of 2022 partly due to Covid-19.

Work on the project’s construction sites continues. But people will have to wait one more year before they can board the new line’s sparking new purple and white cars one what, along with the Gran Paris Express, is one of Europe’s most important sustainability mobility projects.

To date, Crossrail project remains London’s largest public investment. The project will cost up to an estimated €19 billion (€21.5 billion), developer Crossrail Ltd said in August. This massive sum matches a grandiose effort: 73 miles of new track (about 100 kilometers), of which 42 kilometers of tunnels that called for removal of 8 million tons of soil and its transport to the island of Wallasea in Essex to create a new nature reserve.

Excavation below the streets of London is still continuing for this new subway line that will be able to transport 200 million passengers every year alone, and that among other advantages will allow passengers to reach Heathrow airport from the center of the city in only 33 minutes.

Despite the slowdowns related to Covid-19, work is continuing and the first tests are scheduled in the coming months.

The finish line is now in sight for a race that began in 2012, when 8 Tunnel Boring Machines (TBM) started excavation work at a rate of 100 metres (328 feet) per day. Once completed, the new line will consist of 40 stations (10 of which newly built) and will cut across the city, joining Heathrow Airport with the commercial and entertainment areas in the West End and the City to the east, increasing the transport capacity of London’s internal rail system by 10%.

The London’s new underground Crossrail will shorten travel times within the city (the journey from Canary Wharf to Heathrow will drop from the current 55 minutes to 34 minutes), and bring the city’s central districts within a 45-minute commute time for 1.5 million residents who today are not well served by the city’s transport network.

The work was approved by the British government in 2007 with the Crossrail Act and funded by the Department of Transportation and Transport for London (TfL). It will have a significant impact on the economy. According to Crossrail, the added value produced by the work will be around £42 billion (€47 billion) in terms of jobs created and time saved, while 55,000 jobs will be created throughout the project and its supply chain. 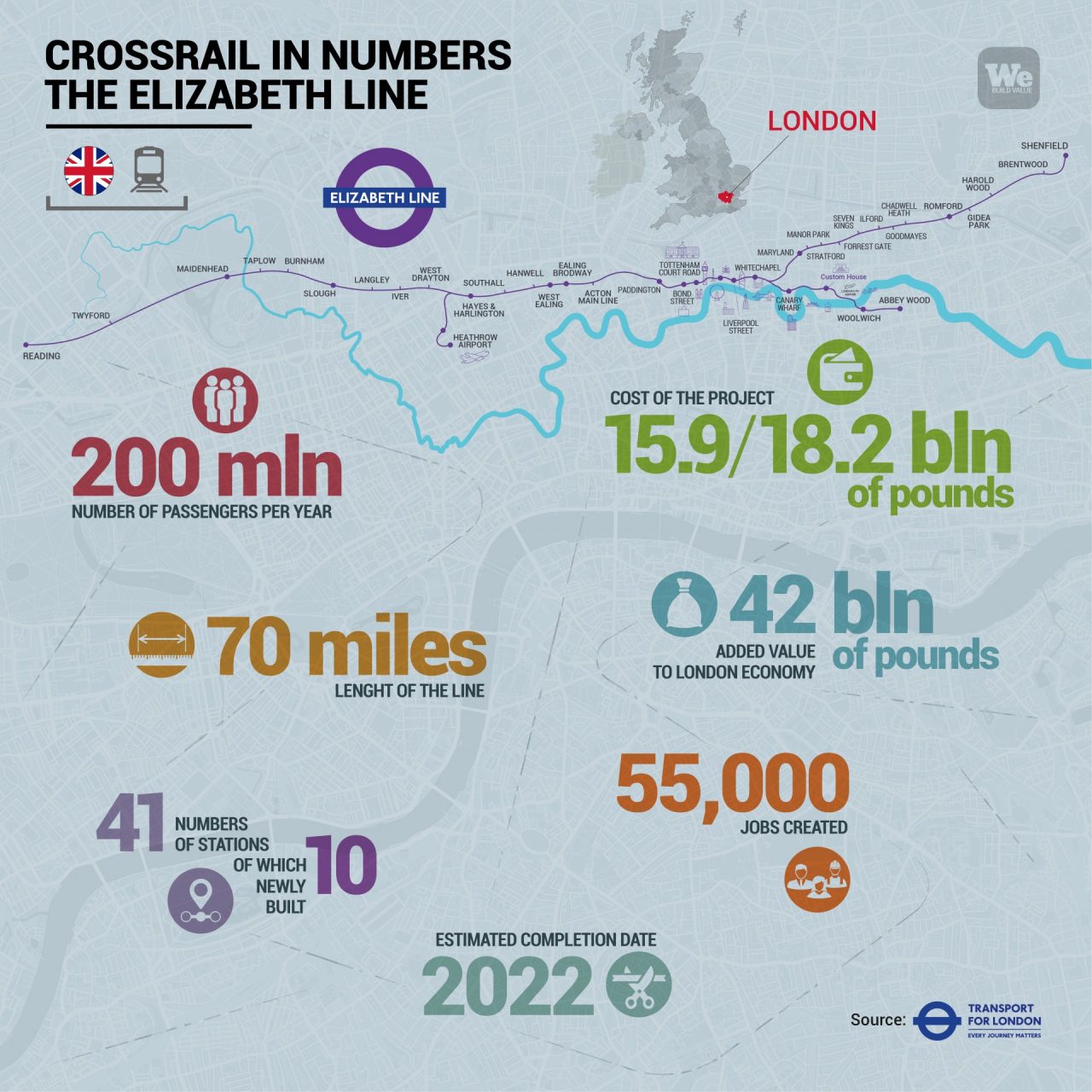 London’s new sustainable mobility projects don’t stop with the new Elizabeth Line. The Northern Line, which runs from Kennington to Battersea in South London, is being extended.  Work is underway on two new stations, one at Nine Elms and the other at Battersea Power Station, an area that is now undergoing a major urban redevelopment project. The administration’s plans call for the two new stations to open as early as next fall, despite the pandemic’s impact on the timetable.

The development of the new lines has now become an essential part of the city’s economic recovery from the damage caused by the pandemic lockdown. Until March of last year, London’s momentum seemed unstoppable. According to report by Oxford Economics, the city’s growth outperformed both Paris and Frankfurt, with an impressive boom in the real estate market, accompanied by an increase in the cost of living and, of course, a strong push on infrastructure.

Now London is looking ahead to 2041, when — according to the calculations of the London Plan drawn up by the city’s administration in 2019 — the metropolis will have nearly 2 million more inhabitants, adding 49,000 new jobs each year (for a total of 6.9 million) and over 5 million additional trips on its public transport networks than at present.

Responding to this change will be the challenge for the city’s transportation system, a challenge that will have to be met with all the restrictions and difficulties imposed by Covid-19.