American universities: worksites busy in the halls of knowledge

From campuses to laboratories to sports facilities, America’s universities are starting to invest again

Los Angeles stadiums: a look at the “zero impact” venues

The United States is reaching into its wallet to raise its academic profile. After years of relative inactivity, substantial public and private funds are flowing to the university sector to build new infrastructure for medicine, scientific research, life sciences, and sports. With more than 5,300 colleges, 1,626 of which are public, American higher education is among the best equipped systems in the world for offering courses and faculty in every corner of the country.

California alone has nearly 300 colleges. New York and Texas each have more than 200. These three states each serve more than one million undergraduate students. But the number of colleges located across the country has shrunk in recent years. Dozens of private colleges have closed in the wake of the Covid-19 pandemic due to declining enrollment, and obstacles for students to obtain financial aid for tuition, books, supplies and dormitories. Public colleges are funded by local and state governments, primarily through taxes, while private colleges rely on tuition and donations from alumni or supporters.

Several states and colleges have announced new projects. UChicago Medicine (University of Chicago Medical Center), a leading private school, has announced it will build a $633 million (€555 million) cancer hospital on its Hyde Park campus. The new complex will include 128 beds, medical facilities and laboratories with the intention of making it an Illinois hub for oncology research. The facility also addresses the need to redevelop an area, the South Side, where lack of health care access and economic and social inequalities are most pronounced.

Quinnipiac University in Hamden, Connecticut, just north of New Haven where Yale University is located, has launched a $244 million project to construct three new buildings on the Mount Carmel campus. It’s an unprecedented investment for the university, which was founded in 1929 and had a $545 million endowment in 2020, from private sources. The new complex will also house a 600- to 800-person auditorium and have an additional 417 beds.

Yale itself, one of eight super-ranked Ivy League schools, along with Brown, Columbia, Cornell, Dartmouth, Harvard, Princeton and the University of Pennsylvania, has just announced a $350 million project to build a zero-emissions building dedicated to engineering and quantum and materials sciences. The new facility, which will rise north of the Bass Center and east of the Class of 1954 Chemistry Research Building near the Wright Laboratory, will house departments of applied physics, chemical and environmental engineering, computer science, electrical engineering, mechanical engineering, materials science and physics. To make room for it, some buildings, including Wright Lab West and the Wright Lab Connector, will be demolished and integrated into the new facility.

Dakota State University, a public institution founded in 1881 in Madison, South Dakota, is investing $90 million in public and private funds to grow the cyber-research industry in South Dakota by creating a cyber-security research lab.

Wellesley College, founded in 1926, has recently opened its new Science Center, one of the most ambitious building projects of this institution, which excels in the arts and scientific research. It is one of the most prestigious private women’s colleges that with Barnard, Bryn Mawr, Mount Holyoke, Smith, Radcliffe and Vassar makes up the Seven Sisters consortium. The project has just been completed with 36 classrooms and 108 laboratories. 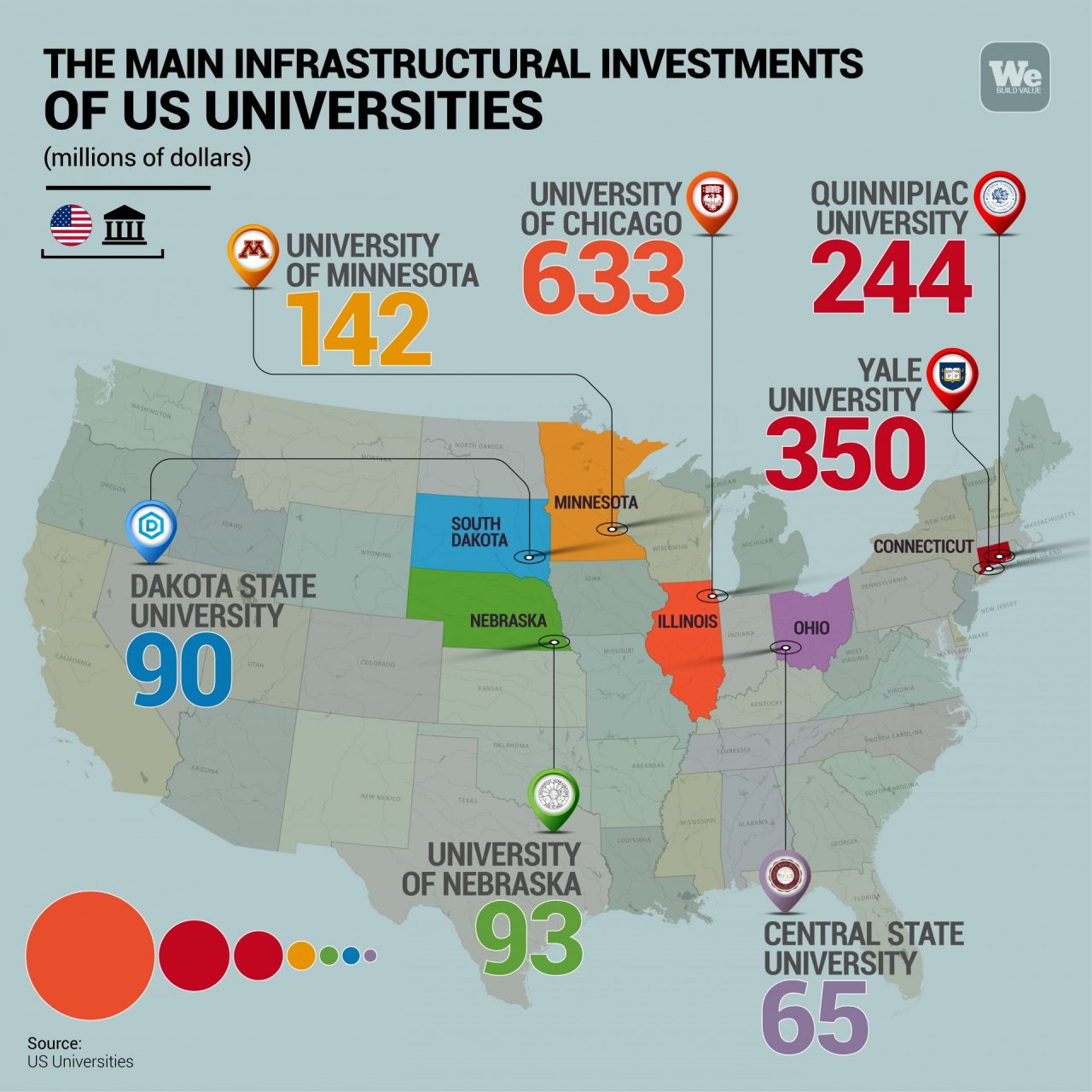 From Utah to Minnesota, investment in labs and athletic facilities

The University of Utah is moving forward with plans to build an indoor training facility for its football athletes. The $61.8 million project includes a new indoor practice field and sports medicine facilities. Tennessee State University, for its part, has announced access to $250 million in new state funds to be used for long-overdue infrastructure improvements.

The University of Minnesota also expects to receive a proposed $214 million in state appropriations to improve its facilities, including $142 million for the Higher Education Asset Preservation and Replacement (HEAPR) fund, which is funding approximately 240 projects, and the remaining $72 million for a new teaching laboratory on the Twin Cities campus.

Last but not least are Central State University in Ohio (a planned $65 million for the expansion of student residences) and the University of Nebraska ($93 million from the city of Omaha for new laboratories and the expansion of the medical campus). Investments in university infrastructure are . The agency Fitch Ratings over the past month rating on bonds issued by a dozen colleges from Miami to Philadelphia, from New York to Rhode Island, from Chicago to Denver.