From high-speed rail to new subway lines, a look at all the construction projects that will change how Italy gets around.

Reggio Emilia / Italy - 08/26/2018 : The A1 Autostrada del Sole motorway near the Reggio Emilia motorway exit, with the bridge designed by Santiago Calatrava in the backgroud
Bologna train station in the weekend the coronavirus spred, 24 February, 2020
Motorway with flowing traffic seen from above. Turin, Italy - April 2021

Observing Italy from a plane flying at low altitude, what stands out is the number of construction sites that now dot large areas of the country. Viaducts are popping up in the mountains of the Apennines where the new high-speed rail line will link Naples with Bari; new highways in the north will reduce traffic on the already congested arteries of Lombardy and Veneto; train tracks disappear under the mountains and are lost in miles and miles of tunnels where high-speed trains will connect Liguria with Lombardy and Trentino Alto Adige with Austria in a few years’ time.

Important infrastructure works are under construction, and more are planned for the future. A record amount calls for tenders and awards were made in the first ten months of 2022, according to Cresme, the most authoritative economic research centre in Italy’s construction world, as part of its XXXIII Rapporto Congiunturale (Economic Report).

The Cresme report highlights how Italy has started building again, taking advantage of the EU Covid-19 recovery fund, the National Recovery and Resilience Plan (NRRP), to create jobs, reactivate the economy, but above all modernise its incomplete infrastructure network. 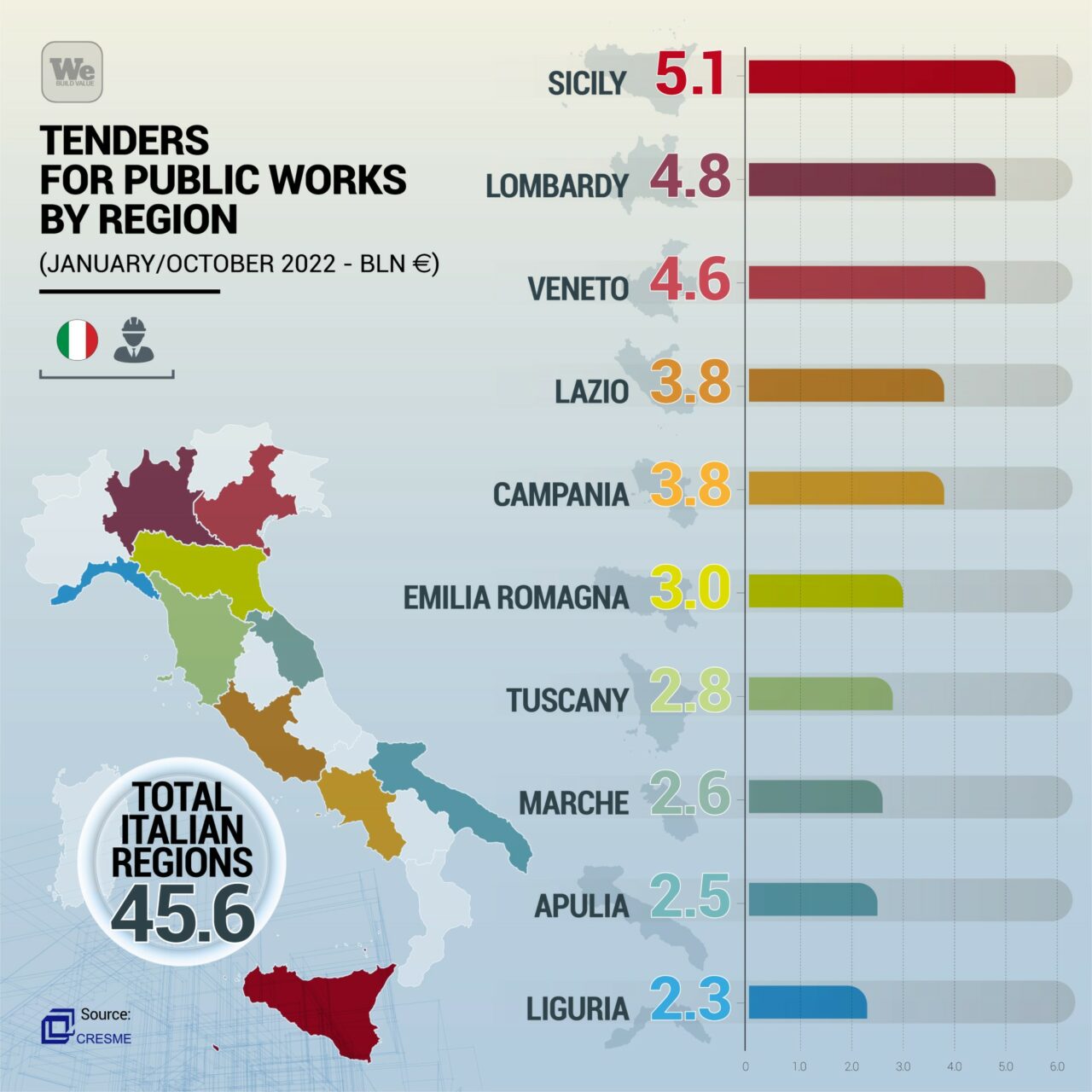 Construction sites open across the country

Even during the holiday season, work at Webuild’s Italian construction sites never stops. Engineers, technicians and workers are busy from Sicily to Piedmont completing the new infrastructure that Italy needs. In Rome and Milan, Italy’s two metropolises, two subway lines are under construction (the C and the M4, respectively, the first section of which was recently inaugurated). In the rest of the country, work is bustling at high-speed rail lines, new highway junctions, bridges, sustainable civil construction, and urban redevelopment projects.

Some of the projects are old ones that were already underway, while others have been funded by the NRRP, in a race to build the infrastructure that will improve Italian mobility with a more extensive and sustainable rail transport network. According to Cresme, the new calls linked to the NRRP and assigned as of last October 31 are crucial. These include the quadrupling of the Fortezza-Verona railway line, the new breakwater of the port of Genoa, and the new lots of the Palermo-Catania rail link.

The Palermo-Catania railway, on which Webuild is working, represents a revolution for Sicilian mobility because for the first time in the island’s history a high-capacity railway line is being built with trains that will be able to reach 200 km/h (124 mph).

Work on this line has been underway for some time, but Cresme pointed out that it has gathered speed in 2021 and continued to improve in 2022. According to the report, in 2021 investments in the expanded public sector grew by 19.9%; those in public administration construction by 23.7%, while local government payments increased by 14.2%. These figures confirm a return to growth, especially in the major works sector. Some regions are moving faster than others.

Construction sites in Italy: A stellar year for all regions

Italy’s regions – some more, some less – have all benefitted from the infrastructure revival. As many as 18 of Italy’s 20 regions were able to benefit from an increase in infrastructure investment amounts in 2021. Leading the ranking is Marche, which in one year saw its share of investments rise from €396 million ($396 million) to €2.6 billion ($2.6 billion), largely due to work on the Adriatic Link, or the new undersea power line that will connect the region with Abruzzo.

Aside from the year-on-year percentage increase, the largest share of investment for 2022 came from Sicily. The island has been allocated €5.1 billion ($5.1 billion), including €1.3 billion ($1.3 billion) just for the Palermo-Catania line. Other new projects include road works, as well as the deployment of ultra-wide broadband for schools and the public health service.

In terms of absolute values for the largest allocations in major works, after Sicily comes Lombardy, Veneto, Lazio, and Campania. Once again, it is sustainable mobility works that lead the infrastructure renaissance. From subway lines to high-speed trains, Italy has become an active worksite. Tomorrow, when the construction is completed, it will surely more modern and sustainable.