Milan’s Metro Line 4: the M4 will bring the city closer to the rest of Europe

Just two words sum up how Milan’s new M4 metro line will change the city: 15 minutes. That is how long it will take, once M4 is up and running, to reach the Linate airport from Milan’s city centre, reducing the amount of time it takes to reach the rest of Europe from the heart of Italy’s business capital.

Set to be 15 kilometres long, the line will have 21 stations, crossing the historic centre in just 30 minutes to connect areas on the eastern and western sides, from the Linate airport to the San Cristoforo station.

The M4 will be able to transport 86 million people a year, thanks to the frequency of its trains: every 90 seconds during peak hours.

The M4, funded by a public-private partnership with construction led by a consortium headed by Salini Impregilo, was designed from the very start to encourage residents to be involved. In 2018 alone, 10,000 people took part in the “open days” organised to let the curious visit the new stations. So anyone could have their say about the M4 project, giving feedback, presenting a proposal or raising criticism or concern, be it from a neighborhood committee, a business owner or an individual resident.

This led to certain decisions being taken to minimise the impact of the construction works on nearby residents, such as disposing the earth excavated in the tunnels by using underground conveyor belts instead of trucks; or working with the superintendent’s office to display the archaeological finds unearthed during the excavation at the Archaeological Museum of Milan.

These are just a few of the things that stand out in what is being called “the neighbourhood’s metro,” a project that aims to let local people have their say not only from the moment it opens its doors, but also while it was being built.

In January, excavations began on the central section of the route, which includes eight stops (Tricolore, San Babila, Sforza Policlinico, Santa Sofia, Vetra, De Amicis, Sant’Ambrogio, Parco Solari). For this section, larger TBMs are being used, measuring 9.15 metres across, so that passengers can disembark directly inside the tunnels, reducing the space occupied by the stations to a minimum.

The eastern part is already completed, while the west is 72.5% done. Milan’s Mobility Superintendent Marco Granelli said in December the goal was «to stick to our time table: in January 2021 we will open the first section from Linate to Forlanini, the section from Dateo to San Babila at the end of 2022 and then the whole line in July 2023». 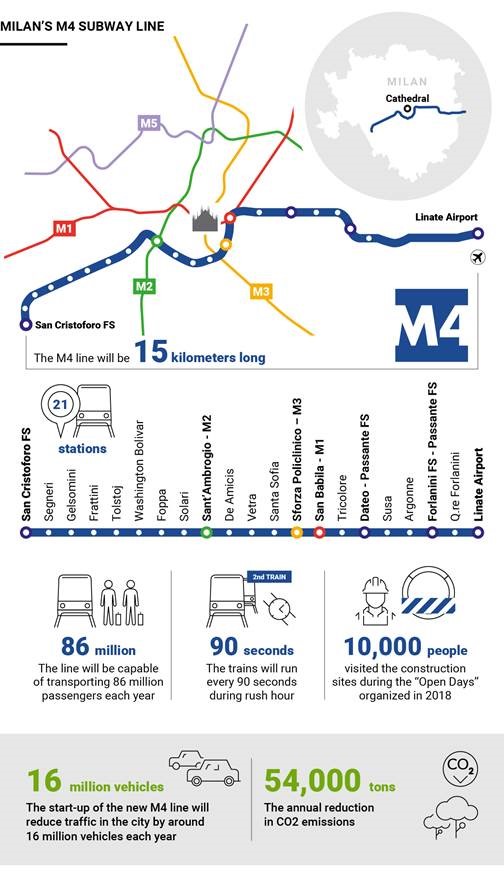 TBMs near the Navigli canals

Construction of the M4 enters a new phase as it approaches the Navigli network of canals. The tunnel-boring machines (TBM) are to keep digging until next spring. They are passing below the Waldensian Church on Via Francesco Sforza, the Basilica of Sant’Ambrogio, the Ca ‘Granda, the Columns of San Lorenzo, and the Torre Merlata building on the corner of Via San Vittore and Via Carducci. And this is just a part of the impressive historical and artistic heritage that workers and technicians are protecting as they build this strategic piece of infrastructure.

To protect Milan’s architectural and artistic heritage, the company responsible for the project (owned by the city and a group of companies led by Salini Impregilo and Astaldi) has adopted a technical protocol for underground work that combines preventive analysis with continuous monitoring. These procedures were tested by Salini Impregilo when it built Cityringen, Copenhagen’s new driverless metro inaugurated on September 29 by Queen Margrethe II. Before that, it had done them along the B1 Line in Rome.

Digging beneath a crowded urban centre entails an exceptional commitment to monitoring and analysis, both in the design and in the execution of the works. In the case of the M4, the tunnels are being dug at a greater depth than Cityringen or the B1. The technicians are adopting a procedure calling for archaeological assistance during the excavation of stations and relics, an activity that proceeds even after the superintendent’s office gives the go-ahead.

Technicians have collected every architectural and structural piece of information about the buildings that could be potentially affected by the excavations. This has allowed them to identify any critical issues which could require special measures. Inspections revealed that Casa Silvestri and Palazzo Serbelloni, among others, needed special care. For Villa Necchi Campiglio, which houses an important collection of valuable art and design objects, an agreement was signed guaranteeing insurance coverage for the museum and its collection. The agreement called for a detailed inventory of the entire collection, and some works judged to be at a higher risk for their age or materials received temporary packaging.

Priceless historic buildings and monuments received special care. Certain monuments were even moved out of the TBM’s path to avoid any risk of damage, such as the Column of Verziere in Largo Augusto; the statue of Cesare Correnti in Piazza della Resistenza Partigiana; the medieval wall in Via Francesco Sforza; and the Madonna della Rassegnazione. These monuments will be returned to their original locations after cleaning and restoration, as required by the culture ministry.
The excavations have uncovered numerous finds of historical and scientific value for archaeologists and the culture ministry, such as the ancient Roman cemetery near the Basilica of Sant’Ambrogio.

This safeguarding of the city’s heritage was made possible by Salini Impregilo’s experience gained over the years in the construction of underground projects. During the digging of Copenhagen’s Cityringen, the TBMs came within 1.5 metres of the foundations of some historic buildings. During work on Rome’s B1 Line, the underground areas needed to be frozen during an important discovery.
In Thessaloniki, Greece, an ancient Roman road was discovered during the construction of the city’s first metro line. It is in the process of being safeguarded.

The M4 will have a substantial impact on Milan’s mobility. When it starts operating, the city’s entire metro network will be 118 kilometres long, becoming Europe’s sixth largest.

It is estimated that the start-up of the new M4 line can reduce traffic in the city by around 16 million vehicles each year, with an annual reduction in CO2 emissions of up to 54 thousand tons.

But it will still take some time before the M4 is ready. To date, 56 construction sites are open across the city, where a combined total of 1,500 people work. Meanwhile the tunnel-boring machines (TBMs) are digging away underground to speed up the time necessary to complete the job.

Technology at the service of infrastructure

This high frequency will be thanks to one of the many innovative technologies being deployed on the project. There will be driverless trains equipped with a communications system that enables them to can talk to each other through a Wi-Fi network. They will know exactly how far away they are from those ahead and behind them. That means the trains will know whether they can approach the station without the risk of an accident. This will allow the line to carry 24,000 passengers per hour in each direction.

The stations will be equipped with automatic doors, which guarantee a high level of safety for passengers.

The ticket system, managed by Azienda Trasporti Milanesi (ATM), the public transport company, will be “contactless” just like those installed along the other lines as of June 28, 2018. ATM was the first in Italy and among the first 10 in the world to offer its customers the option of using contactless payment to pass through its turnstiles.

ATM has equipped all 113 subway stations with dedicated turnstiles using POS and the QR code, both inbound and outbound, which can be triggered by waving a smartphone on top of the POS sensor. To use the service, commuters need to register with their smartphone or smartwatch to which their payment card has been linked. In addition, the system calculates the journeys made by each commuter over the course of a day and charges the most advantageous rate should discounts be available.

This technology is used in other cities, including London, Moscow, Chicago, Singapore and Vancouver.

Progetto Italia and the M4

The M4 is being built by a consortium of companies led by Salini Impregilo and Astaldi. They are joining forces to become a single group under Progetto Italia, a plan by Salini Impregilo supported by an investment by state-backed lender Cassa Depositi e Prestiti. Milan’s M4 line is a first testing ground for this partnership between the two companies working on a complex project that will have a significant impact on the quality of life in Italy’s business capital.

Recycling Wastewater in Turkey: a plan to fight drought