From the National Recovery and Resilience Plan to the 2021 budget, here’s a look at the Italy’s resources for a new era of infrastructure spending

What sort of firepower is Italy deploying to revitalise its infrastructure network? The investment figures can be hard to decipher, because funding for projects being overseen or planned at the Ministry for Infrastructure and Sustainable Mobility (MIMS) comes from the European Union, the Next Generation EU-backed National Recovery and Resilience Plan (NRRP), Italy’s own budget, and other European funds.

Italy’s state-owned export credit agency SACE has done the math, and in a new report it calculates that the total investment for infrastructure comes to about €100 billion ($100 billion) over the next ten years. The report, “Yesterday, Today and Tomorrow: Infrastructure in Italy,” outlines a breakdown whereby the NRRP contributes €40.01 billion ($40.01 billion) that the ministry will allocate to infrastructure works. Added to this are €20.11 billion ($20.11 billion in complementary national funding earmarked for projects with a higher degree of complexity.

But that’s not all, because 2021 budget allocated additional funds of €36.1 billion ($36.1 billion) to the MIMS, which are to be invested in upgrading the country’s mobility systems with a view to sustainable development. Adding up the various items, the grand total comes close to €100 billion to be spent over the next ten years to modernise the country’s infrastructure network. At the center are major strategic works, such as the development of the high-speed rail network, the completion of the TEN-T corridors, the upgrading of nodes, railroads and regional networks, and the narrowing of the gap between industrialised north and the underdeveloped south. This infrastructure will modernise the country on the one hand and contribute to increasing its wealth and welfare on the other. 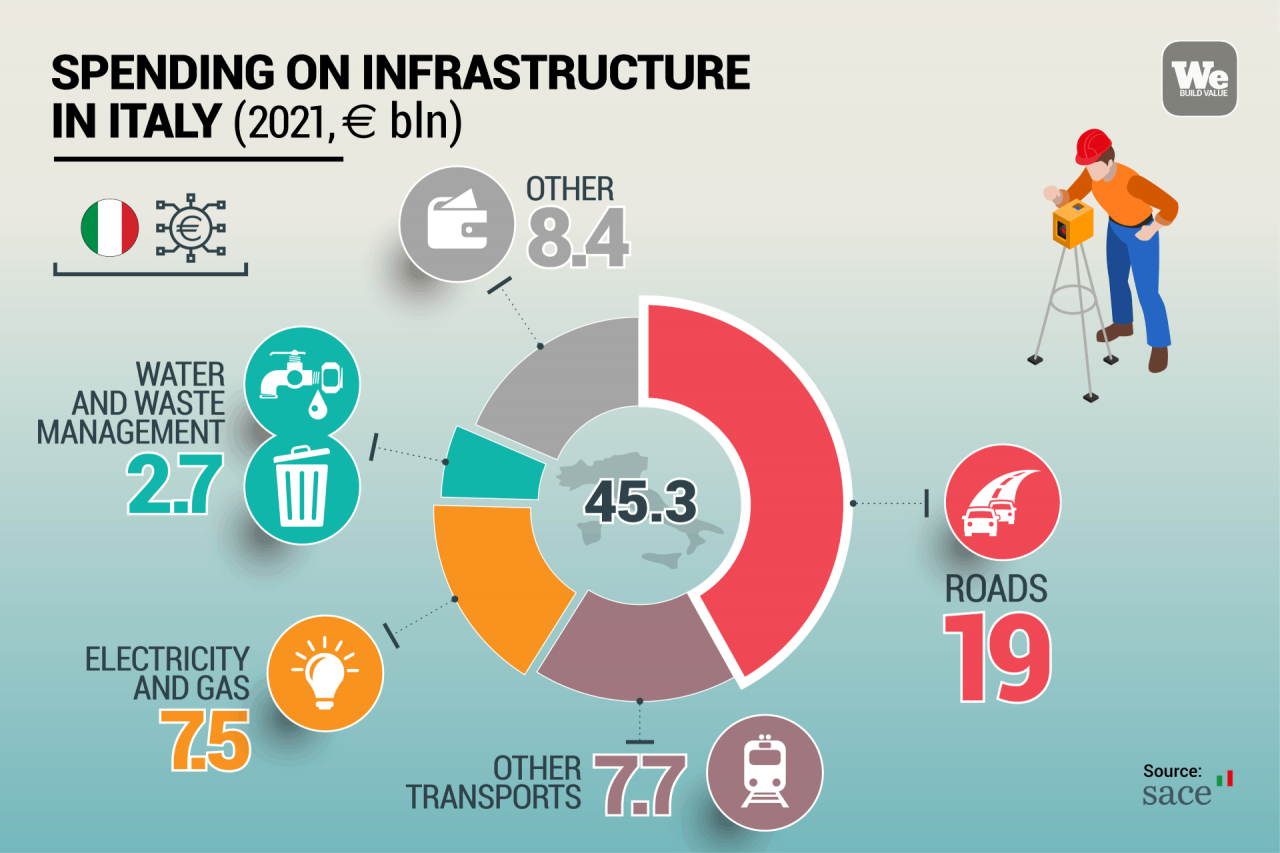 Investment, a knock-on effect of nearly €40 billion in wealth produced

More investment, more infrastructure, more wealth produced and distributed in Italy. SACE’s study was carried out by Oxford Economics, which focused on the impact of infrastructure in light of the NRRP investments.

The NRRP investments in construction will have an important impact on the country’s economy and welfare: spending on investment in infrastructure and mobility on projects carried out by the Ministry of Infrastructure and Sustainable Mobility will generate an added value of €37.8 billion in direct and indirect economic activity. This is extra wealth that will be distributed in the coming years in areas across Italy where the infrastructure projects are now under construction today. From Liguria to Veneto, from Marche to Campania, from Calabria to Sicily, almost all of Italy’s regions will benefit from the cascading effects produced by infrastructure investments. This spending will create tens of thousands of new hires at both contractors and their suppliers, and more generally improve the economies of the surrounding areas, ensuring constant and significant GDP growth in the coming years.

Railways, ports, airports: these are the main investment targets to be modernised, upgraded, or built from scratch with new construction. In first place is sustainable mobility, followed by intermodality, or the linking of air and ship transport.

The infrastructure investments are already visible on the ground, with worksites open in half of Italy, from the Naples-Bari high-speed rail link and the Palermo-Catania high-capacity rail link, to the major works planned in the area around Genoa: the Giovi mountain pass and the Foranea Dam. From north to south, the focus is on sustainable mobility. According to analysis by Oxford Economics for the next five years, investment in railways, ports and airports will grow by an average of 3.8% per year, followed by spending on infrastructure related to energy and gas (+3.2%).

Starting with rail routes such as the Verona-Brenner to the new Brescia airport hub, infrastructure developments will focus mainly on the energy transition and environmental sustainability of the works.

But in addition to the most vital sectors, the entire infrastructure sector is set to experience a decade of growth. NRRP funds, accompanied by other allocated and planned resources, will keep the country’s infrastructure growing by an average of 1.7% a year over the next decade, a rate higher than the eurozone average, which is stuck at +1.5%.

The five-year period from 2021-2026 will see spending increase at a rate of 2.6% per year, only to become less intense in the following five years. 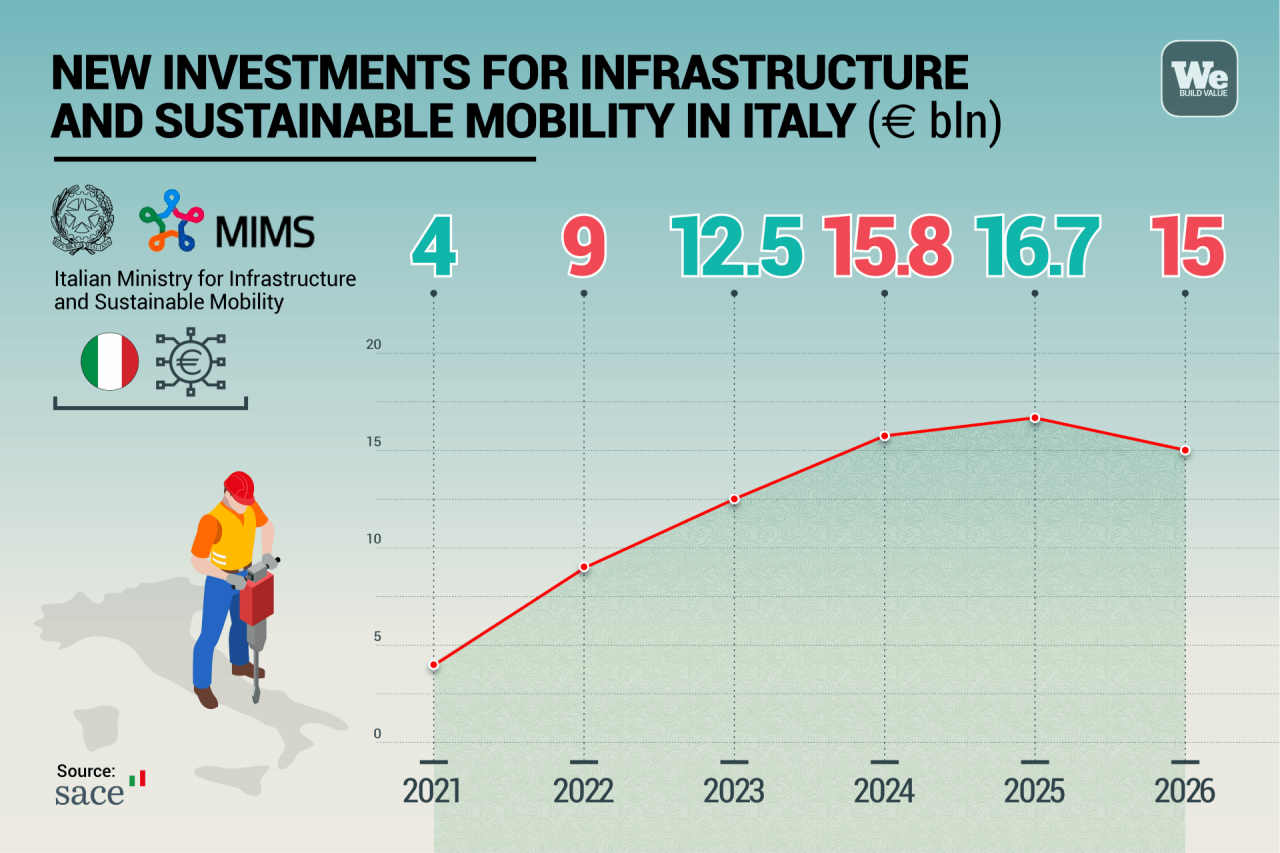 The global response to the crisis, an opportunity to grow abroad

Reading the NRRP as an Italy-only opportunity is surely a mistake. In fact, the Plan prepared by the government mirrors the many other maxi-investment projects that European partners, as well as the world’s most developed countries, have launched in recent months to respond to the crisis, first Covid-19 and now energy.

The funds made available by Europe but also by other governments, starting with the United States, offer a great opportunity for Italian companies beyond national borders. The proof once again comes from the numbers: in 2021, global construction turnover grew by 5.6% (exceeding $5 trillion), driven mainly by Asian demand, which now accounts for 42% of the world’s total. The trend is confirmed in the future as well: Oxford Economics forecasts global industry growth of 3.2% per year for the next ten years.

Hence the opportunity for large Italian companies that operate in international markets, from the United States to the Middle East, and are engaged in large projects around the world.