The record-setting bridge that will join Canada and the USA

It may be a coincidence, but the collapse a few days ago of an old road just a few steps away from the Gordie Howe International Bridge that will soon connect the United States and Canada is the perfect illustration of the two sides of the infrastructure story: old structures that immediate maintenance, and modern ones that are the result of cutting edge engineering excellence.

The Gordie Howe International Bridge belongs in the second category.  The six-lane bridge that will connect the U.S. city of Detroit with the Canadian city of Windsor will reach a length of 1.5 miles (2.5 km, one of the five longest bridges in North America), creating a new opportunity to make Canada and the United States even closer.

The work, expected to be completed in 2024, will cross the Detroit River with its 0.53-mile (853-meter) span, becoming the longest single-span bridge in North America. 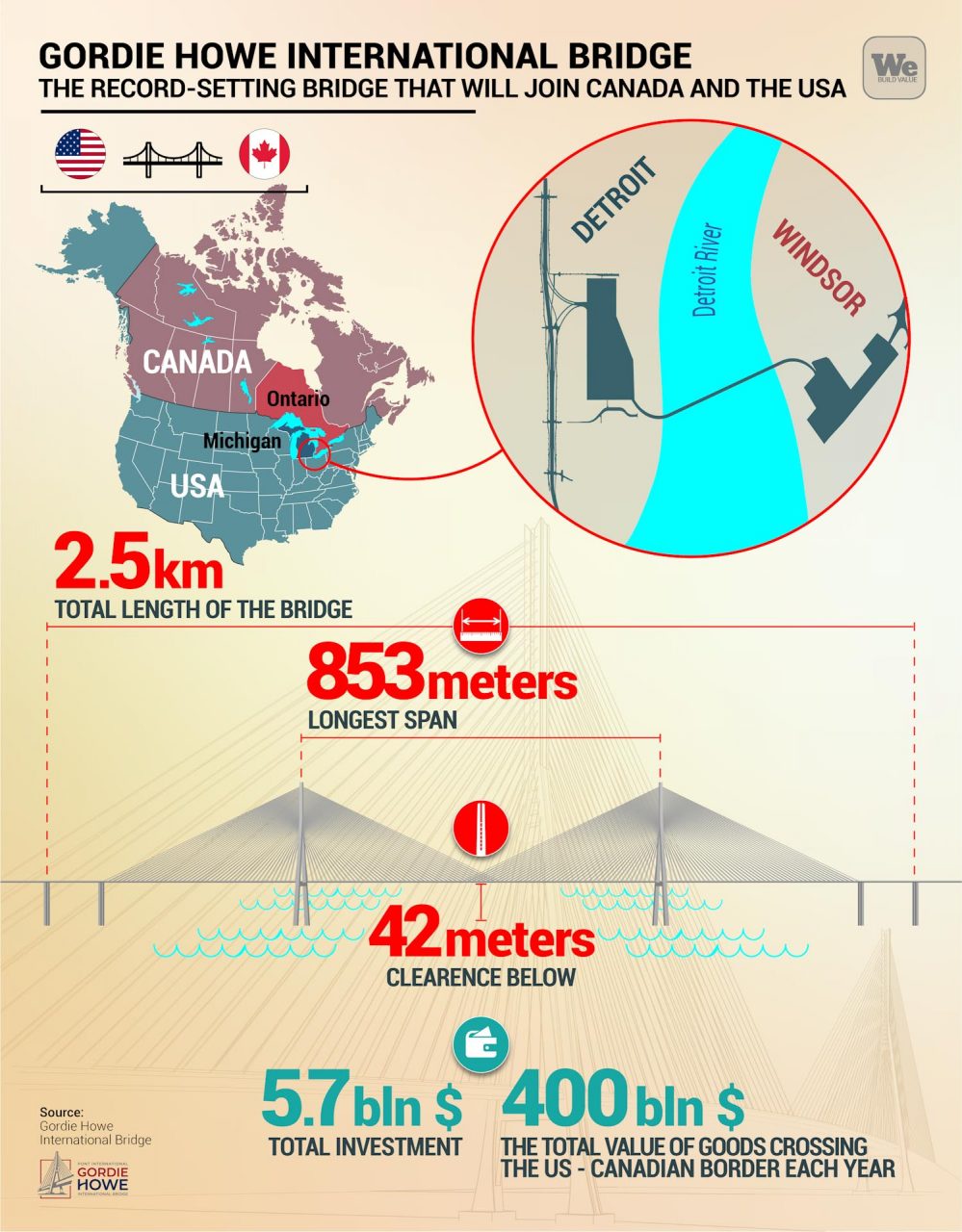 The Gordie Howe International Bridge, a bridge that has already made history

The bridge’s name sums up its history. Gordie Howe was a much-beloved Canadian ice hockey player who enabled the Detroit Red Wings to win the Stanley Cup, the sport’s most prestigious trophy, four times. Howe passed away in 2016 at the age of 88, and so the Canadian government — the main funder of the work — decided to dedicate it to the memory of the famous sportsman.

Actually, the story of the bridge begins much earlier and goes back as far as the early 2000s, when feasibility studies and environmental surveys were initiated on the area. The first approvals for the project came between 2009 and 2014, while preparatory activities for construction began the following year, in 2015.

Construction did not begin until 2018, contracted to the Windsor-Detroit Bridge Authority, and is scheduled to be completed in 2024.

Work continues apace and last April marked a major milestone with the completion of the two huge towers that will support the structure.

New ports on the Detroit River

The CA$5.7 billion (€4.1 billion)  project includes more than just the construction of the bridge. Ancillary works ranging from new highway outlets to the construction of two new ports for a major logistics hub, one on the Canadian side and the U.S. side. In the United States, the new hub will occupy an area of 167 hectares (412 acres), and 130 hectares (326 acres) on the Canadian side. The size of the two interports will make them among the largest in the United States, thus opening a direct channel for the transportation of goods from the sea, transiting along the river, and loaded onto trucks that will run on the bridge and reach either the United States or Canada.

Competition with the Ambassador Bridge

The Detroit-Windsor crossing is one of the crucial gateways for trade between the United States and Canada. Each year the total value of goods crossing the U.S.-Canadian border each way reaches $400 billion. This huge flow of goods is handled in part by the Ambassador Bridge, which has been in operation for 92 years and is controlled by the Mouroun family. A few years ago, the Mouroun family appealed to then-U.S. President Donald Trump to block the Gordie Howe project. And in fact to this day 27% of that $400 billion passes right over the Ambassador Bridge span. The resulting legal battle went all the way to the Michigan Supreme Court, which in 2021 rejected the Mouroun family’s appeal. The heated debate over the construction of the new bridge confirms the strategic value of infrastructure, once again is an opportunity for development and wealth.

Goodbye to the Gerald Desmond: Long Beach’s old bridge is being demolished