In the city that never sleeps, urgent urban transport projects must certainly not be caught napping. Covid-19 hit New York City hard, forcing a slowdown of work on the city’s major construction sites but without interrupting them completely.

So the most urgent projects have continued beneath the streets of Manhattan and the other boroughs, while routine maintenance has suffered delays or blockages.

Having survived the worst part of the emergency, the Metropolitan Transportation Authority (the public agency that manages the city and regional transport networks) now faces an uncertain financial future. The massive Capital Program 2020-2024 launched before the outbreak of the pandemic called for investments of $54.8 billion, of which $40 billion to improve New York City’s rail infrastructure, bus lanes, bridges, and commuter rail tunnels. This program has now been put on hold by the MTA, which says if it does not receive help from the federal government, it will have to forgo this massive new investment plan in New York public transport because of the high cost of Covid-19.

The MTA in search of new funds

A few weeks before the Covid-19 virus pandemic exploded, the Metropolitan Transportation Authority announced that it was ready to launch a massive infrastructure program that listed 50 projects, most of them for sustainable mobility.

Now that the emergency seems to be over, the Authority is trying to get the plan back on track, as works were slowed down by the epidemic and the economic crisis that followed. According to official numbers, the MTA now loses $800 million in revenue every month due to the New York public transport crisis linked to pandemic containment measures.

As a result, the MTA has put the Capital Program on hold, and has revised it to give top priority to the most urgent projects — which in reality have continued throughout the lockdown — and putting others on the back burner as the MTA searches for the necessary funds. With an annual loss estimated at $8.5 billion for 2020, Metropolitan Transit Authority has asked Congress to include $3.9 billion in funding for state mobility in the HEROES act.

The situation is in flux, and all eyes are focused on whether Congress will step in to guarantee these vital projects, especially for the modernisation of the New York City subway system – America’s busiest, moving 2 billion people each year. 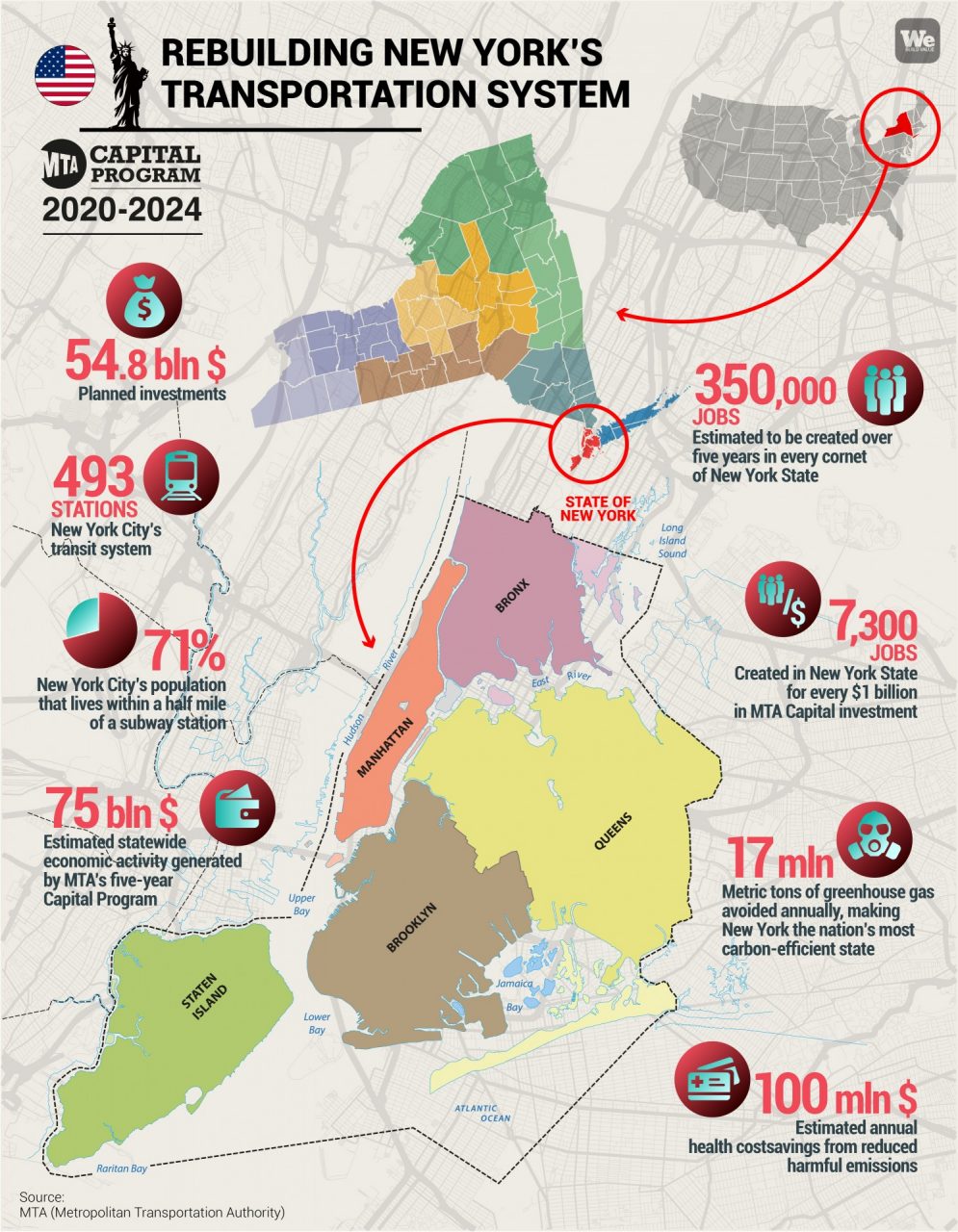 The priority today is to guarantee the economic endowment planned at the beginning of the year for infrastructure works in the Big Apple. Once the financial problem is solved, the list of works has already been approved on the basis of the network’s development needs.

Among the most important things on the “to do” list is the renovation of Penn Station in midtown Manhattan, and Phase 2 of the Second Avenue subway line, which will be extended to cover 8.5 miles (13.7 kilometers) and 16 stations, transporting 560,000 people every day.

Other projects considered as priorities include the Northeast Corridor Gateway, a railway line that calls for building a new tunnel under the Hudson River; the modernisation of all the signaling systems of the city’s subways; and East Side Access, the regional railway line transporting 162,000 people every day from Long Island and Queens to a new concourse at Grand Central Terminal.

Waiting to get started

The MTA’s timing was unfortunate. The setback due to Covid-19, in addition to the health and economic crisis, has slowed down the implementation of the plan called “Rebuilding New York’s Transportation System,” the most important infrastructure renewal project in the agency’s history. The program, which called for spending $54.8 billion between 2020 and 2024, was a 70% spending increase over 2015-2019. This figure alone shows how much effort had been made by the Metropolitan Transportation Authority of the state of New York.

The plan’s goal is to extend the vast transport network even further, modernise the old lines, and build new ones. For every $1 billion invested in network, 7,300 jobs are created in the state.

This is why, according to the MTA’s calculations based on an analysis by Ernst & Young, the $54.8 billion maxi plan would have created 350,000 jobs over its five years, generating $75 billion in wealth for the state of New York.

With numbers like these, it’s clear that the project can became one of the engines for the future economic revival of the Big Apple.