Tunnel Boring Machines are at the centre of some of the biggest infrastructure projects in the U.S.

Lake Mead: size, capacity and evolution of the artificial lake near Las Vegas

It is a gargantuan machine that can exceed 15 meters (49 feet) in diameter, equipped with concentric rows of steel teeth, and can easily reach 100 meters (328 feet) in length. The Tunnel Boring Machine (TBM) is still called a “mechanical mole” in the United States, almost as if to underplay this impressive technology rather than to accentuate the pioneering aspect of being able to unite two points through a large excavation underground, under the sea, or under a river.

America’s tunnels are part of its history. The Gold Rush left behind hundreds of tunnels, now abandoned or celebrated as historical landmarks, such as the Burro Schmidt Tunnel in California, half a mile of rock excavated by hand in 1900 by the miner William “Burro” (from the Spanish for “donkey”) Schmidt. Then came the automobile boom, and some of the first underground railroad tracks were abandoned or turned into bomb shelters. A network of underground tunnels below Dupont Circle in Washington DC that had served as a trolly stop from 1949 to 1962 has been used over the past twenty years as a “food court,” a cultural meeting place and, most recently, a permanent art exhibition.

The Tunnel Boring Machine has opened new horizons since the first experiments were made at the beginning of the last century and, as the years progressed and new solutions developed, these machines have become increasingly sophisticated in electronics, efficient in depth, gigantic in size and at the same time more manageable, comfortable and safe for the operators who drive the excavation from inside. They are able to drill rock with extreme precision to build railway, road and hydraulic tunnels. Their cost, which depends on the diameter and length, is several tens of millions of dollars, and their completed task is worth that figure many times over in terms of economic benefits for the areas and populations concerned. 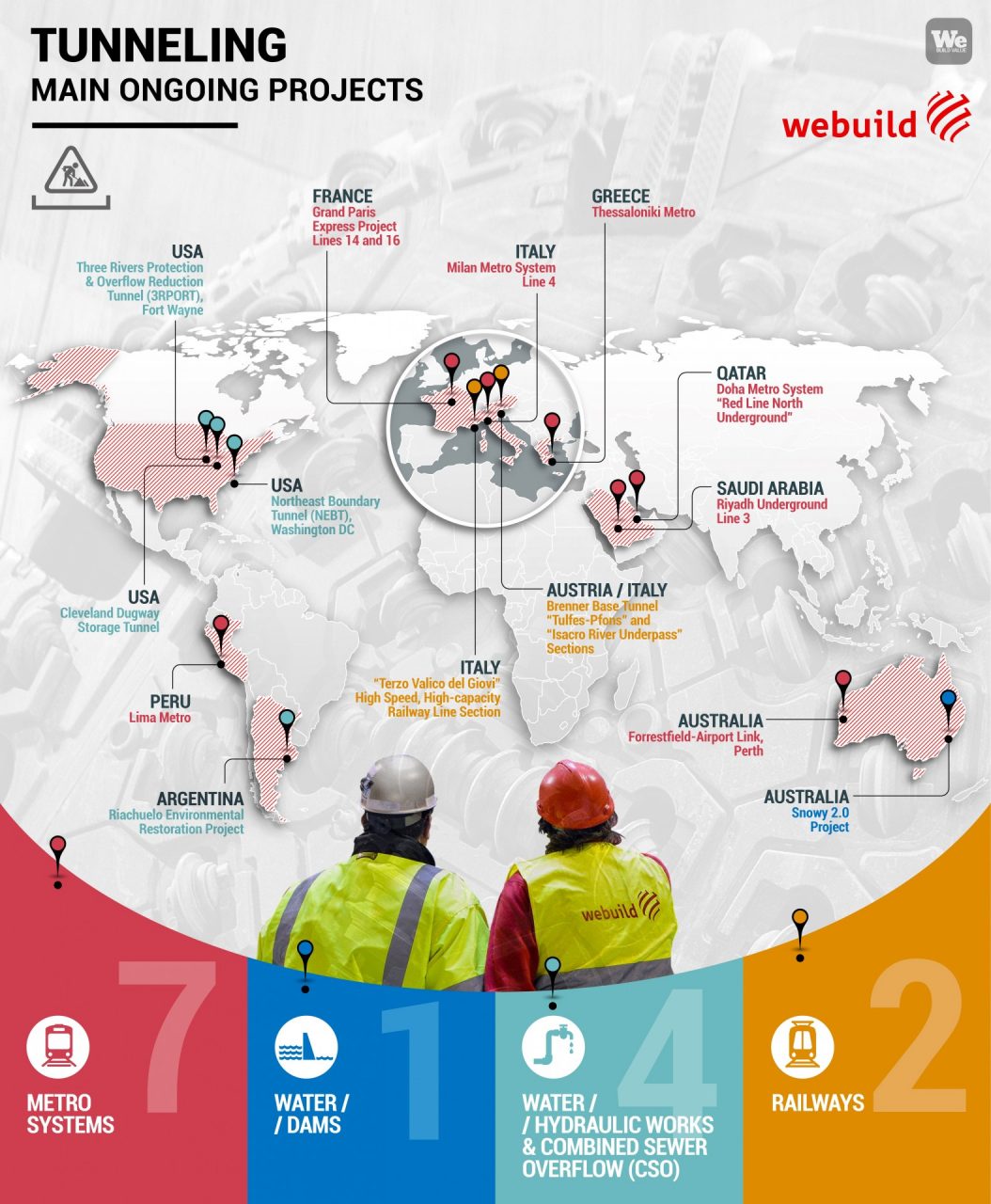 Large TBM excavations in the USA

One of the biggest projects of the last decade was took place in the heart of the United States, deep beneath Lake Mead just outside Las Vegas.

The Intake 3 project, designed to protect water supplies to the gambling metropolis during drought conditions lasting nearly a decade, was completed in 2015 by the Webuild Group with the construction of a hydraulic tunnel over four km (2.4 miles) long, dug 200 meters (656 feet) below the lake.

The TBM machine, subjected to a pressure of up to 15 bar, compared to an average of one to three bar, at the end of its excavation job joined up perfectly with the vertical pipe (straw) built to pump water to Las Vegas. This construction milestone — in particular for the Tunneling sector – made these heretofore unusual machines become well-known.

Among those who were paying attention was the founder of the Tesla car manufacturer, Elon Musk, who created the Boring Company a few months after the Lake Mead tunnel project was completed. After building a test tunnel in Hawthorne, California, where he showcased the technological future of his Tesla X car along with the achievements of the mechanical mole, Musk was awarded a contract to build an underground loop for the Las Vegas Convention Center and announced plans for transport links between Baltimore-Washington-New York.

In North America, the spread of COVID-19 has slowed operations but has not stopped activity at the sites where the TBMs are deployed. From California to Georgia, from Florida to British Columbia, at least 30 or so tunnel boring machines are at work for the construction of large engineering works between metropolitan tunnels, river crossings, road links and wastewater disposal tunnels.

The role of the Webuild Group

With 2,400 kilometres (1,491 miles) of tunnels built around the world, Webuild has assumed a primary role in these works of strategic importance for sustainable mobility, environmental protection, and the development of infrastructure capable of bringing well-being to the areas and communities concerned.

On the outskirts of Washington D.C., Webuild and its subsidiary Lane Construction have been called upon to solve the problem of pollution of the Anacostia River by sewage overflow during periods of intense rain. It built a 3.8 km (2.3-mile) hydraulic tunnel, dug at an average depth of 30 meters (98 feet). The project is part of one of four Clean Rivers Project tunnels launched by the District of Columbia’s Water and Sewer Authority, which is expected to result in a 96% reduction in wastewater in rivers by 2025.

During the crossing below the Anacostia, the Tunnel Boring Machine dug clays and sandy soils under a pressure of up to 3.5 bar. In November 2017 the project entrusted to Webuild received the Sustainability Initiative of the Year award, assigned by the International Tunneling and Underground Space Association (ITA-AITES) and in 2018 the Award of Merit for the Water/Waste Water sector assigned by ENR Global Best Project Award.

This important goal will be reached once the excavation of the North East Boundary Tunnel has been completed. This eight-kilometre-long (4.9 miles) tunnel with an eight meter (26-foot) diameter is currently at 65% thanks to the efforts of Webuild and Lane Construction.

Similar to the one in Washington DC, the city of Seattle has asked Lane Construction to excavate a four-kilometre (2.4 mile) hydraulic tunnel built to solve the pollution problem of Seattle’s Ship Canal. The Tunnel Boring Machine is being assembled in Germany and will begin excavating the 6-meter (19 foot) diameter tunnel in mid-2021.

Seattle is the most recent project acquired by the Webuild Group and Lane Construction in the United States. In addition to Seattle, Las Vegans and Washington DC, the group is working on the Three Rivers project in Fort Wayne City, where another six-meter (19-foot) diameter mole is at 50% of the total eight-kilometer tunnel to be excavated.

The group’s long list of underground works under construction includes tunnels completed in the cities of Cleveland, Portland and San Francisco.

Webuild-Lane TBMs are also at work in the Northeast Boundary Tunnel (NEBT), also part of the Clean Rivers Project in Washington, D.C.

America, despite having the longest freight rail network in the world with over 140,000 miles (225,308 kilometres), and one of the most interconnected road networks – although structurally in need of renovation — still has a lot to discover in the field of tunnel boring machines.

Big projects waiting for the elections

The Trump Administration and Congress have important infrastructure programs and funding plans, many of which are road and rail crossings that need to be designed or rebuilt. But with the presidential elections approaching on 3 November, opinions on programs and funding goals are diverging. Meanwhile, the Gateway Project to expand the railway known as the Northeast Corridor from the Bergen Palisades in New Jersey to Penn Station in New York has been suspended for years due to lack of agreement between government and legislator.

Presented in 2011 to double the capacity of train traffic, it required ten years of construction and a cost of $13.5 billion, to be financed with public funds and private investment. One year later, forecasts had risen to 15 years of construction and $14.5 billion in costs. The race to build the new tunnel soon stalled, and various works and repair projects began on the existing one.

The Gateway project, as originally proposed, involves the construction of a two-lane tunnel to replace the North River Tunnel under the Hudson River, through which about 450 trains pass every day carrying an average of 200,000 passengers. New estimates reported in the local press indicate that the project cost has risen to $30 billion. Secretary of Transport Elaine Chao, in a hearing at the House last February, said she favored repairing existing structures, which date back to 1910 and suffered damage from Hurricane Sandy in 2012, rather than wait for a new tunnel to be built.

Work is being completed on the Delaware Aqueduct Bypass Tunnel, a vital repair project for New York City’s water supply system, where a TBM dug a 2.5-mile (1.83 kilometer) deep hydraulic tunnel under the Hudson River. The Delaware Aqueduct, which measures 85 miles (137 kms), is considered the longest of its kind in the world and carries about half of New York City’s drinking water.

Here again, the Tunnel Boring Machine has proven to be a loyal ally, increasingly valuable in relaunching federal and state programs for American infrastructure. In spite being called “boring,” America is rediscovering the importance of environmentally-friendly buildings and the excitement of breakthrough, when the mole pops through on the other side of the rock, having left the surrounding environment intact and joined two hitherto remote points.

An underground highway to protect Stonehenge