From London to New York City, these are the subway lines that inaugurated the age of urban rail transport

The Growing Popularity of Driverless Metros

From London to Budapest, from Chicago to Paris, from Glasgow to New York City: even the subway has its pioneers. The first subway lines that kicked off urban rail transport date back as far as the mid-19th century, more than one hundred years before this form of mobility became widespread — and above all appreciated for its ability to reduce congestion and air pollution.

There are now 178 cities running subways (also called “underground” or “metro” systems) across the globe, together capable of transporting 168 million passengers every day.

This achievement was made possible thanks to those who first believed in the success of this means of transport, and with great foresight and dedication were the first to create what today are recognised as the oldest metro lines in the world.

At 402 kilometres (249 miles), the London Underground is the third-longest metro system in the world. It holds one record, however, that will never fade: it is the oldest metro line in history, first put into operation in 1863. The system became electric and connected to a wider network in 1890, and from there it began its journey, not only underground in London, but also across all sorts of technological innovations.

Today, London’s underground transport system is served by 540 trains, with 270 stations. Over the years there have been many modifications and considerable investments to grow and modernise the network, so much so that today only 45% of the system is actually underground. The remainder of trains run above ground, reaching the furthest outskirts of the sprawling capital.

Initially the London Underground was not publicly owned, and the lines were owned by several private companies. From 1933 things changed, the London Passenger Transport Board was introduced and a public authority began to purchase an infrastructure that became strategic for everyone. 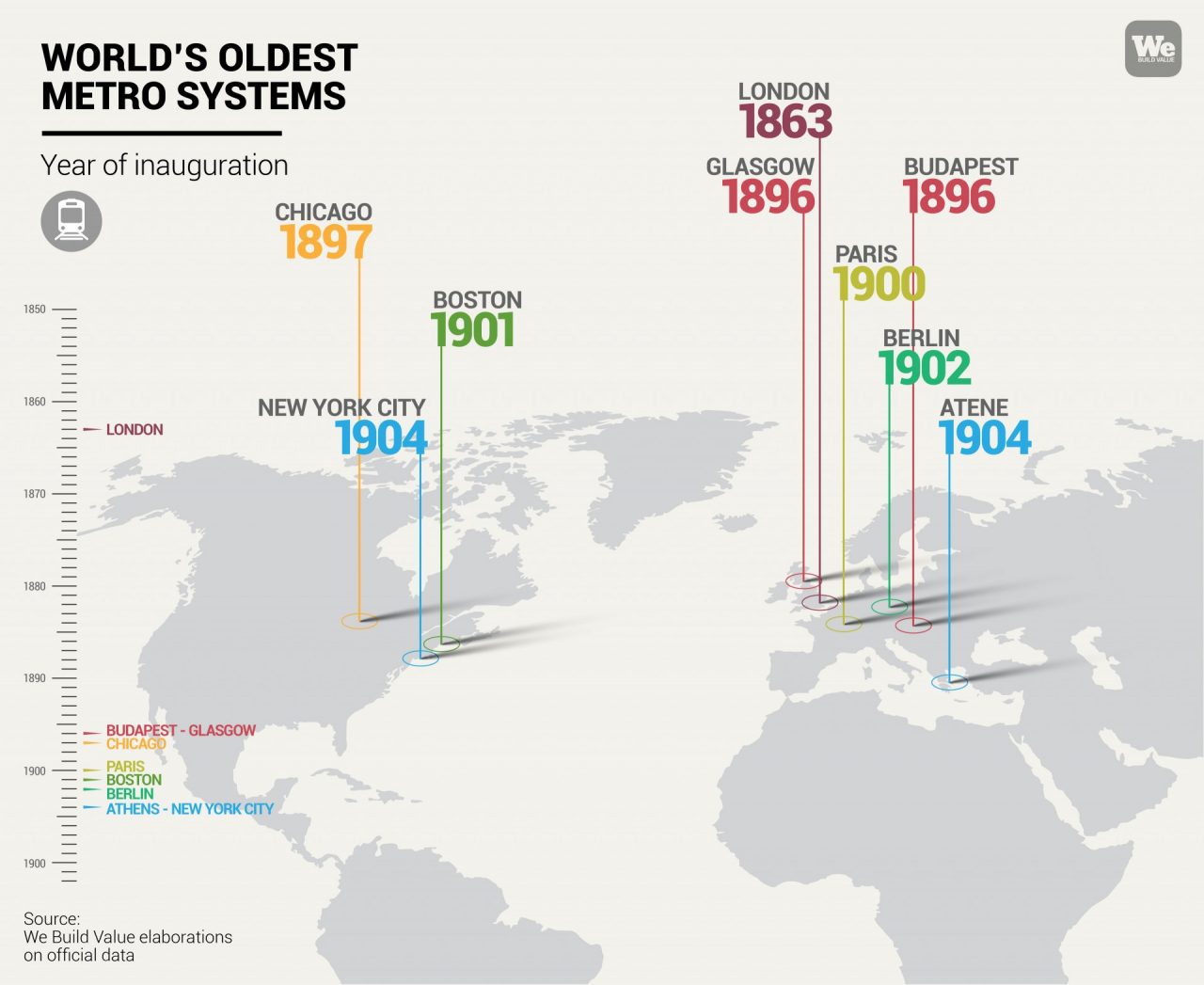 Budapest’s first metro line officially opened on 2 May 1896; an infrastructure transformed by time into something more — so much so that in 2002 it was recognized by UNESCO as a World Heritage Site.

Although it is the second oldest metro in the world, the city’s network has not expanded that much over the years and today it has four lines. A fifth, which is still being designed, should connect some peripheral areas. Both line 1 and line 2 were completed in 1973, reaching a respective length of 4.4 kilometers (2.7 miles) and 10.3 kilometres (6.4 miles). The M3, on the other hand, was opened in 1976.

In addition to being the oldest metro line in Continental Europe, Budapest also holds another record: the M4, the fourth city line opened in March 2014, was the first driverless metro in Eastern Europe. Its impact on the city’s well-being has been so considerable that, according to the Budapest administration, this line alone saves its passengers an estimated14 million hours of travel each year, time otherwise wasted in the car.

Glasgow’s subway, the third oldest in the world, has a unique feature: it has never been extended since its inauguration in December 1896. Even today, the Scottish city’s underground rail system still revolves around this 10.5 kilometre-long (6.5 mile) circular route, carrying an average of 13 million passengers each year.

Its inauguration was marred by a bad accident at the end of the first day of operation, which caused the line to close and reopen only on 19 January 1897.

Over the years, despite the fact that no new lines were built, the Glasgow line has undergone a number of modernisation works, starting with the refurbishment of many of its stations and ending with the purchase of modern trains. 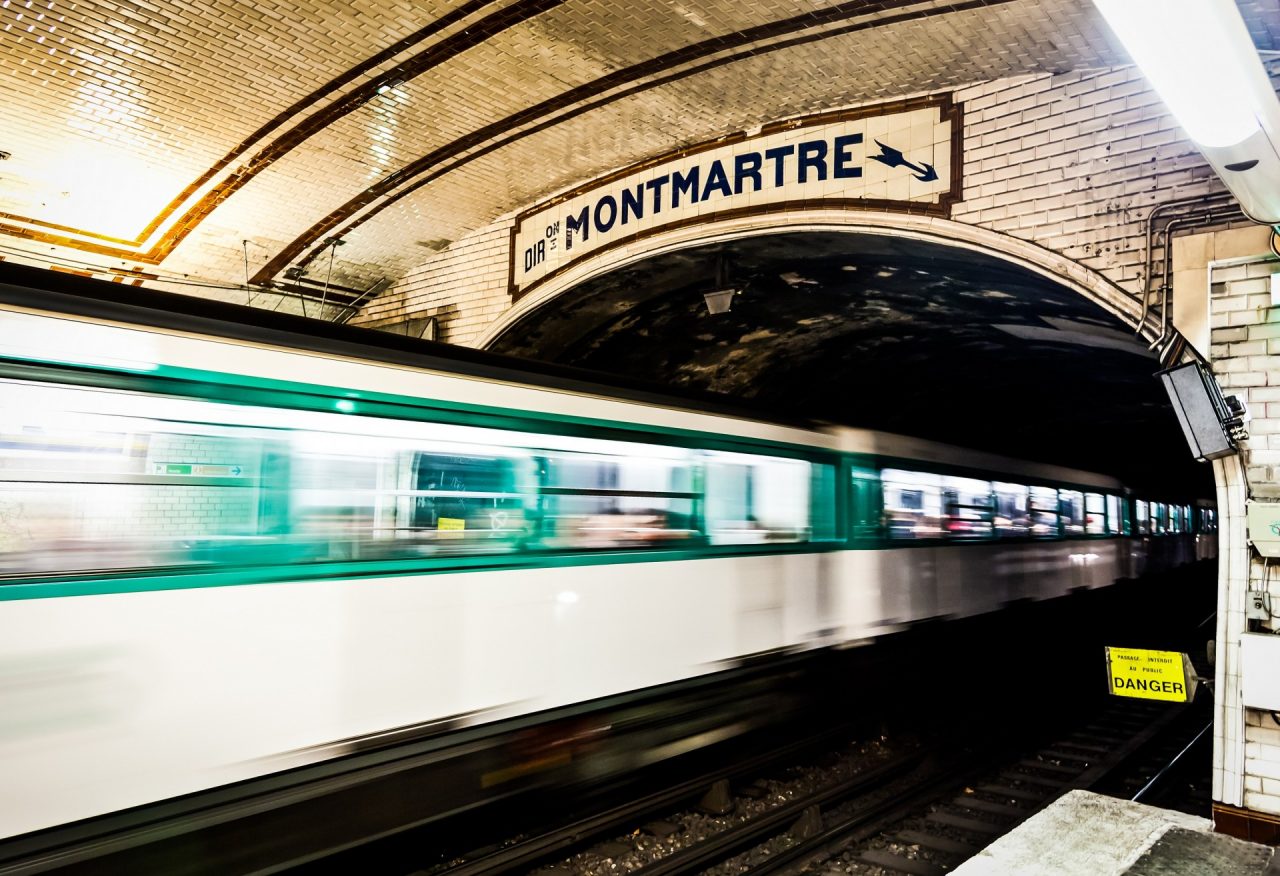 The Chicago “L” is famous worldwide not only for its age, but also for its capacity: this infrastructure carries 230 million passengers every year, making it the second busiest metro system in the USA.

Its operation, as an electric metro, began in 1897 and grew over time to cover 165 kilometers (102 miles) on 8 lines, connecting the historic center of Chicago with the suburbs.

This is an essential infrastructure for the American city, which may be expanded in the coming years with the construction of a high-speed railway line capable of connecting the metro with O’Hare International Airport, one of the busiest airports in the country.

The abbreviation “metro” was first used in Paris with the inauguration of the first line of the Paris Métro on 19 July 1900.

The Paris Métro is both great infrastructure and a world monument: its stations are examples of Art Nouveau, and 83 stops still reflect the original style. But the strength of the Paris metro is also its capacity for innovation. Its expansion currently underway is among the most ambitious in the world: the Gran Paris Express, in which the Webuild Group is also participating, which will run in a circle around the Paris capital, connecting the suburbs where millions of people live.

New York City: the infrastructure that has become a film set

When it first opened, a single ride cost $0.05. A long time has passed since that day in October back in 1904, when a booming New York City inaugurated its first subway line.

Today the New York subway network is the largest in the world in terms of number of stations (470), and one of the largest in total length (380 kilometers, or 236 miles). This extensive network connects 5 city boroughs transporting 1.7 billion passengers in a year. Looking back to its past, the 1970s were a difficult time for the city’s subway system due to declining passenger use.

The subway has now been relaunched thanks to substantial investments that continue to this day. Cinema, art and the collective imagination did the rest, transforming the New York subway into a familiar symbol of urban life around the world.

An underground highway to protect Stonehenge